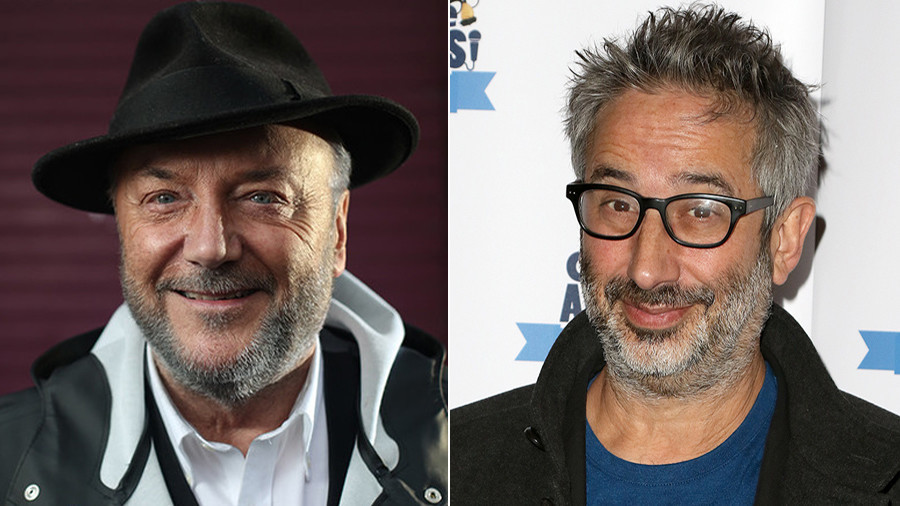 © Global Look Press
Jeremy Corbyn is set to be dragged into a defamation case against former colleague George Galloway after a row broke out on Twitter between the expelled Labour politician, comedian David Baddiel and head of Momentum Jon Lansman.

Baddiel, who is Jewish, accused Galloway – a former MP and ex-colleague of Corbyn – of being anti-Semitic, in a row which erupted on social media.

The fight began on Twitter when Galloway accused Baddiel of being an “Israel fanatic,” after the comedian retweeted Labour MP Stella Creasy’s post calling for a mass protest at the upcoming visit of US President Donald Trump to the UK.

The comedian insisted Galloway’s only reason for calling him an “Israel-fanatic” would be because he is Jewish.

Ex-MP for Labour and the Respect party, Galloway made the accusations despite Baddiel previously saying he is neutral on the Middle East and once making the claim: “I don’t give a f*** about f***ing Israel.”

Solidarity with @Baddiel – since he’s a Jew who’s talked about being non-Zionist, there’s no possible reason to call him a “vile Israel-fanatic” other than antisemitism. There clearly should be no place for @georgegalloway in @UKLabour or in the employment of @talkRADIO https://twitter.com/baddiel/status/957911979879956485 …

Galloway threatened them both with legal action.

Members of the public rounded on the comedian in support of Galloway.

Since I’ve always made it entirely clear that my attitude to that country is entirely meh, I think we can only conclude that by “Israel-fanatic” George just means Jew. Vile Jew. And that therefore he is an anti-Semite. Now let him come at me with his stupid fucking lawyers. pic.twitter.com/zJ1rLol3qG

Baddiel refused to back down, responding to some of those that supported Galloway’s position.

You said ppl who use term “Zionist cabal” are “close to anti-semitism” (2:40 here: https://www.youtube.com/watch?v=G_kfHMHq-Gk …). Anti-Zionism is never anti-semitism. If you don’t care about Israel, why do you repeat their propaganda equating anti-Zionism and anti-semitism? @georgegalloway is right.

Simultaneously, a petition to have Galloway reinstated in the Labour party after his 2003 expulsion over comments on Iraq is gathering steam.

Several thousand signatures were gathered in a matter of weeks as Galloway’s supporters claimed former-leader Tony Blair was wrong to oust him.