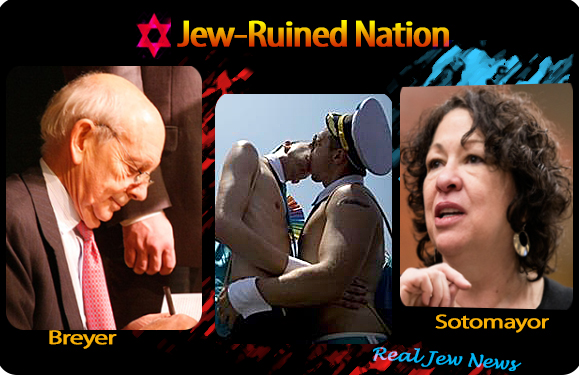 AMERICA UNDER THE RULE OF A JUDICIAL DICTATORSHIP is the theme of Pat Buchanan’s latest piece in his syndicated column.

Incensed with the Supreme Court’s recent decision to turn down appeals of five same sex marriage rulings, Buchanan writes that through a long line of decisions the Court has ordered “the de-Christianization of all public institutions” in America.

Buchanan has it right. But he fails to use the Jew word. (Past use got him fired from MSNBC.)

For it is JEWS throughout the Court system that have “ordered the de-Christianization” of our Jew-ruined country.

Beginning with the four Jews at Supreme Court who struck down the Defense Of Marriage Act in defiance of God’s Law, and who continue their love of depravity:

Ginsburg (one ugly Jew hag; Kagan; (an alleged lesbian), Breyer; and Sotomayor; (yes, she’s a Jew)…there’s a host of other God-hating JEWS in the “judicial dictatorship” system who vote for perversion that infects American society.

Woe to your country when your judges are JEWS!…Your country will petrify on the garbage heap of history. 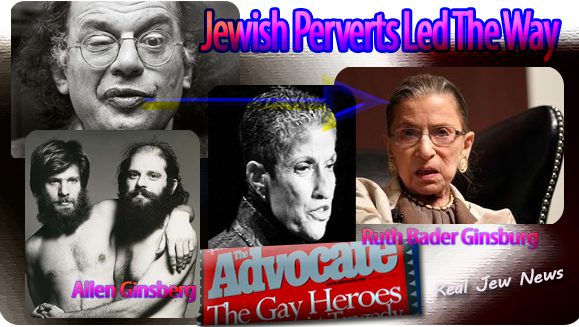 Jewish perverts led the way into America’s moral debasement, and now JEW JUDGES take up the cause where the Jew deviants left off.

Proceeding from the Supreme Court on a downward slope we find the Christ-hating JEW judge Richard Posner of the 7th US Court of Appeals recent ruling that marriage between a man and a woman derives from “a tradition of hate,” a clear position of malignity against the Church and her teaching.

Citing the state’s ban on same-sex perversion as a violation of the 14th Amendment that supposedly guarantees ‘equal protection,’ Cohen willfully ignores that protection does not apply to those who defy God’s law that forbids homosexual unions as an “abomination” and a “vile affection.” 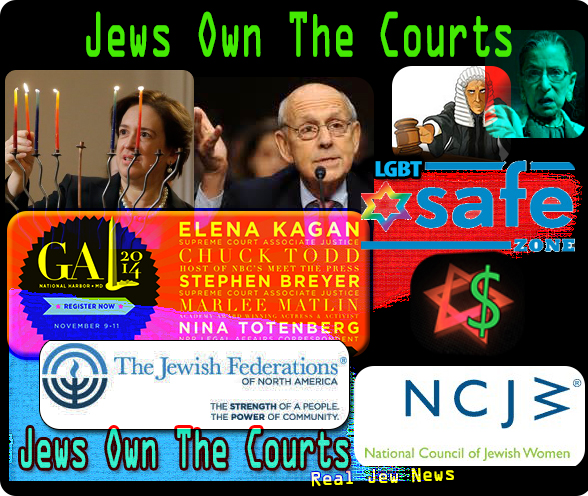 WINE, DINE, AND BUY, is the modus operandi by which “Jewish organizations (there are thousands of them in Jewmerica) tighten up their Jewish power base in our hapless, Jew-ruined country.

Beginning with the Jewish Federations of North America, their “Attorney Divisions” peddle influence by wining, dining, and buying court judges throughout the local, state, and federal levels at lavish Jewish banquets.

Enter the National Council of Jewish Women which instructs its FAT JEW DONORS on how they can “influence” the judicial nominations process. 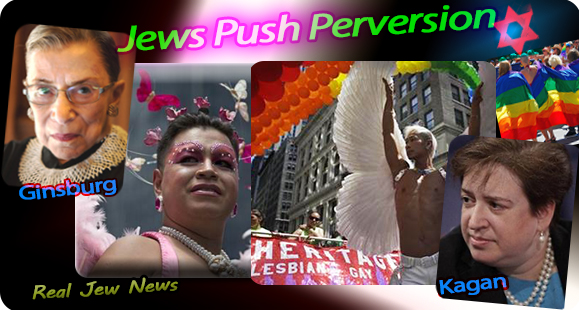 Using ‘constitutional’ buzz words as a come on, the NCJW’s real agenda is to DESTROY a Christian consensus in our Jew-ruined nation by promoting sodomy, perversion, transgender cross-dressing, homosexuality, lesbianism, and what’s next?…how about bestiality?

Why not. If it will corrupt the Gentile youth, (and even some collateral damage of their own Jewish youth), the Jews who rule this country know that when the morals of a nation are weakened, then JEWISH RULE cannot be opposed.

I grew up as a Jew, and I will tell you exactly what the Jewish agenda is to control this country. (You will not hear this from Paul Craig Roberts’ hero, Stephen Lendman.)

Jews are hell-bent (and they have succeeded) in destroying a white Christian power bloc that once DID rule this nation.

Through mass-immigration bringing in multiple creeds; through same-sex defilement of Christian morality (see how the wicked Jews show a ‘Bible’ while a sodomite marriage is performed); and through pushing the Zionist lie to gullible ‘christian’ idiots like John Hagee and his moronic duped followers…Jewry’s tiny minority rises to the top of the cesspool and take TOTAL CONTROL over the brainwashed goyim of Jewmerica.

There you have it.

Now go tell Stephen Lendman, Noam Chomsky, and Dave Lindorff, to shut their Jewish mouths UNTIL they repudiate Jewish Identity Politics in every aspect of its evil.