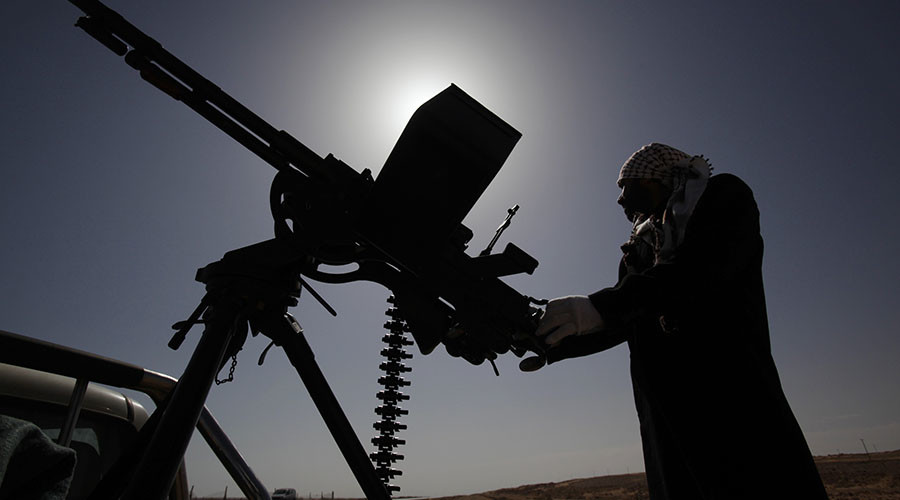 © Asmaa Waguih / Reuters
With another terrorist atrocity erupting in a European city – this time Manchester in the UK – the extent of Britain’s role in the overthrow of Gaddafi in Libya and its connection to the awful carnage that has just ensued could not be more damning.

NATO’s intervention in Libya from March to October 2011, culminating in the savage murder of the country’s leader, Muammar Gaddafi, by an armed mob, turned a functioning state, considered a highly developed country by the UN Development Program in 2010, into a failed state governed six years on by three competing authorities.

Today, Libya is rife with armed militias where chaos is the new normal, evidenced in a refugee crisis that has seen countless men, women, and children perish while making a forlorn and desperate attempt to flee the country across the Mediterranean in ramshackle boats and barely seaworthy craft. It is a country in which ISIS and other Salafi-jihadi groups now have a significant presence.

Contrary to the claims made by the British, French and US governments at the time, the uprising in Libya, which began in the country’s eastern city of Benghazi in February 2011, was not spearheaded by Jeffersonian democrats whose objective was the establishment of a liberal democracy in the country, but instead Islamists intent on instituting a caliphate on foundations of religious extremism, sectarianism, and intolerance.

Drawing on the analysis of two French think tanks, John Rosenthal reveals in a June 2011 article how “jihadists have played a predominant role in the eastern-Libyan rebellion against the rule of Muammar Qaddafi, and that ‘true democrats’ represent only a minority in the rebellion. The report, furthermore, calls into question the justifications given for Western military intervention in Libya, arguing that they are largely based on media exaggerations and outright disinformation.”

NATO’s air campaign to topple Gaddafi, using UN Security Council Resolution 1973 as justification for regime change, has guaranteed the Western military alliance a cold place in history, exposing its self-appointed mission as a guardian of democracy and human rights across the world as a sham. In Libya between March and October of 2011, NATO operated as a de facto air force for Al-Qaeda and in the last analysis ISIS, the groups that benefited most from Gaddafi’s overthrow.

Even more damning, in the wake of the Manchester terrorist attack, are new revelations exposing the existence of a nefarious relationship between Britain’s security services and anti-Gaddafi militants of Islamist persuasion living in the UK, who were allowed to travel from the UK to Libya to join their cohorts in the campaign to topple the government in 2011. Among those militants was Ramadan Abedi, father of Salman Abedi, the perpetrator of the aforesaid Manchester terrorist atrocity, which killed 22 and injured 159, many of them children, at a pop concert in the city.

Abedi Snr is known to have been a member of the Libyan Islamic Fighting Group (LIFG), an Al-Qaeda affiliate committed to Gaddafi’s overthrow. It is revealed that Abedi Snr lived in the UK for some years before returning to Libya to take part in the 2011 uprising. His son, Salman, was born in the UK in the 1990s and is known have visited Libya just before returning to the UK to carry out his suicide attack. Both Abedi Snr and Salman’s younger brother, Hashem, have been arrested in Tripoli in connection with the Manchester atrocity, with the latter reportedly admitting that he had foreknowledge of his brother’s plan to carry out the suicide attack in the UK. It is also alleged that Hashem has links to ISIS.

At the time of the alleged ‘open door’ policy of the British government, allowing Libyan exiles living in the UK, some with connections to Islamist groups, to travel to Libya to take part in the uprising against Gaddafi, the UK’s current Prime Minister Theresa May was the country’s home secretary. This means she was responsible for the country’s internal security, including counter-terrorism and immigration, thus raising the question of whether she knew of the open door policy vis-à-vis Libya and was the one who authorized it?

The wider issue is the complicity of the British establishment in advancing the objectives of Islamist extremism in Libya, however wittingly or unwittingly, and with it the terrorist attacks that have emanated from the North African country since 2011. In 2015, it should be recalled, an ISIS-inspired gunman who’d received military training in Libya murdered 38 tourists as they lay sunbathing on a Tunisian beach. Thirty of his victims were British citizens. It was an act of mass murder, which along with the recent act of mass murder in Manchester, stands as a withering indictment of UK foreign policy and London’s role in the destruction of Libya in 2011.

Under Gaddafi there was no ISIS in Libya and no Salafi-jihadi terrorist networks planning and preparing terrorist attacks against British citizens. On the contrary, Gaddafi was an unflinching enemy of Islamic extremism, which is why groups such as the LIFG and the Muslim Brotherhood were committed to his overthrow, which would not have been possible without NATO’s military intervention.

As the full extent of the perfidy and mendacity of UK foreign policy comes to light over the part it has played in facilitating the rise of Islamist extremism and terrorism in Libya; there is only one conclusion to be drawn: “We have met the enemy, and he is us.”