Speaking at a press conference after talks with Russian President Vladimir Putin in Versailles on Monday, Macron explained his team’s decision to deny RT and Sputnik accreditation during his campaign, branding the media outlets “propaganda.”

That statement, however, ignited a storm of social media comments on “propaganda tools.”

People were quick to note that the day before the second round of the French presidential elections earlier in May, the cover of the Liberation newspaper called on voters to cast their ballots for Macron.

The paper’s weekend edition, which came just as the pre-election ban on reporting went into effect, read: “Do what you want, but vote for Macron.”

“When Macron says that RT and Sputnik are propaganda tools, I remember once again this Liberation [front page],” one person wrote. 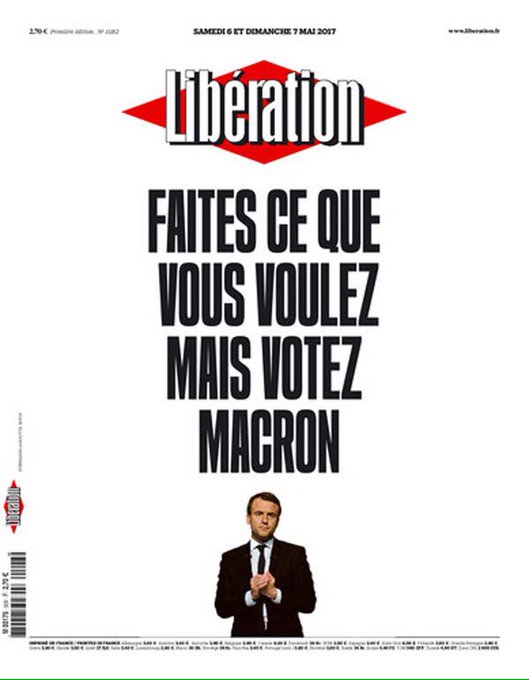 People on Twitter didn’t hold back with the sarcasm, either: “Bravo, French media is an example to follow.”

“‘RT and Sputnik acted like propaganda tools’, said the one who was created by media propaganda,” another wrote, referring to the new French leader.

Some Twitter users were quick to remind that owners of large French newspapers and magazines are Macron’s “billionaire friends.”

In fact, the editorial director of Le Monde, Jérôme Fenoglio, indeed repeatedly called to vote for Macron during the election campaign, saying that it is “logical.”

One of the Twitterati noted that “even radio has become the friend of Emmanuel Macron,” giving the example of FranceInfo.

The social media wrath was also directed at other French media, including L’Obs and L’Express magazines, Le Monde newspaper and BFMTV and France2 channels.

“L’Obs, L’Express and Le Monde made false propaganda according to democratic rules,” one person wrote.

“The majority of the pro-Macron French media are also the tools of influence, but this does not irritate Macron.”

“Macron … has a disgusting taste of hypocrisy. Can we talk about our long-corrupted media that allowed him to be elected?”another person asked.

Others admired the reaction of President Putin when Macron made his propaganda claims.

“I admire the patience of Putin in the face of this clown Macron.”

Though many of the comments were critical, Macron’s statement did find some support across the Atlantic.

One Twitter user praised the French president, saying that “unlike Trump and Republicans Macron was brave” enough to accuse “RT and Sputnik of spreading lies” right in front of the Russian president.

Unlike Trump and the Republicans in Congress & Senate, Macron was brave to called out RT & Sputnik for spreading lies in front of Putin. https://twitter.com/braddjaffy/status/869222821746102272 …

@BraddJaffy Can we borrow Macron for a while?

Some even suggested trading US President Donald Trump for Macron.