A victim is carried away on a stretcher at the site of a car bomb attack in Kabul on May 31, 2017. © Shah Marai / AFP
At least 80 people have been killed and over 350 injured in a powerful car bomb blast that ripped through a diplomatic district in Afghanistan’s capital, Kabul, an Afghan health official has said, as cited by Reuters.

However, the Afghan Interior Ministry said 64 people were killed, according to AFP.

The death toll is likely to rise, local officials said.

The blast is believed to have come from a car bomb. Reuters reported that the powerful bomb was hidden inside a sewage tank on a truck. The precise target was not immediately clear, but many embassies and government buildings are located in the area.

Islamic State (IS, formerly ISIS/ISIL) has claimed responsibility for the Kabul attack, according to 1TV channel. In the past, the terrorist group launched several high-profile attacks targeting Afghan and foreign forces in various parts of the country.

Afghanistan’s President Ashraf Ghani condemned the devastating attack, which happened just days into the Muslim holy month of Ramadan. In a statement quoted by Reuters, Ghani said “the terrorists, even in the holy month of Ramadan, the month of goodness, blessing and prayer, are not stopping the killing of our innocent people.”

The blast struck at around 8:30am local time Wednesday.

Several hours after the attack, AFP reported that ambulances were still taking the wounded to hospital and rescuers were retrieving bodies from the rubble while firefighters struggle to extinguish flames in adjacent buildings.

Despite the high death toll among local residents, the foreign embassies have not reported any victims. The Indian embassy has said its staff is safe, though the building was damaged in the blast. Two employees of the Japanese embassy were mildly injured, suffering cuts, according to AFP. 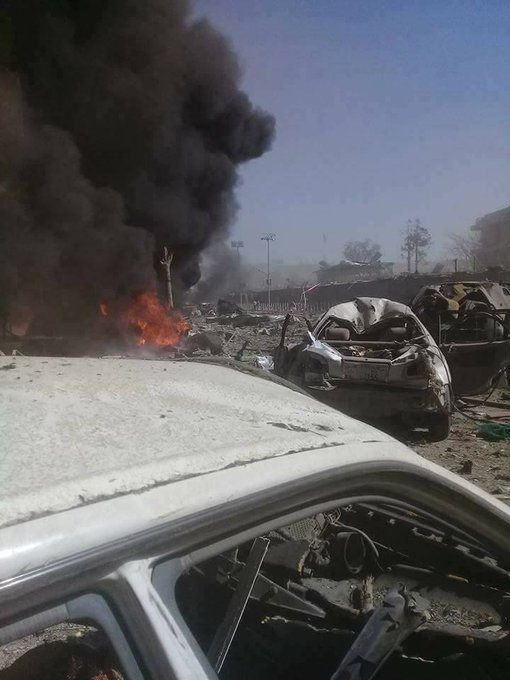 More than 50 vehicles were either destroyed or damaged. @moiafghanistan #kabulblast

The powerful blast destroyed more than 50 vehicles in the area, Pajhwok News reports. 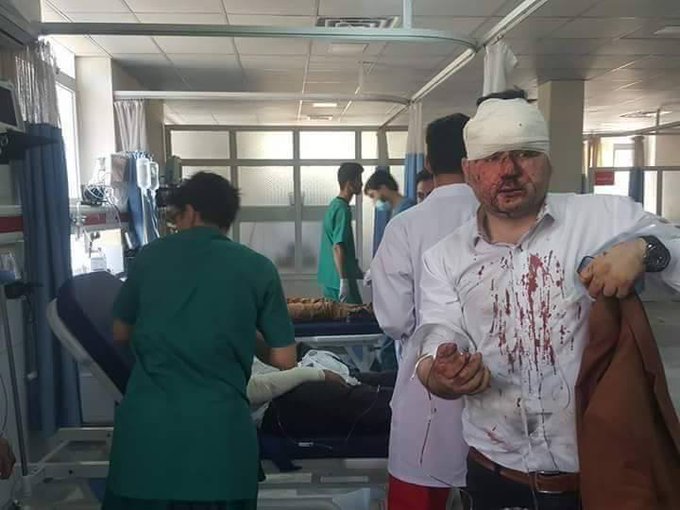 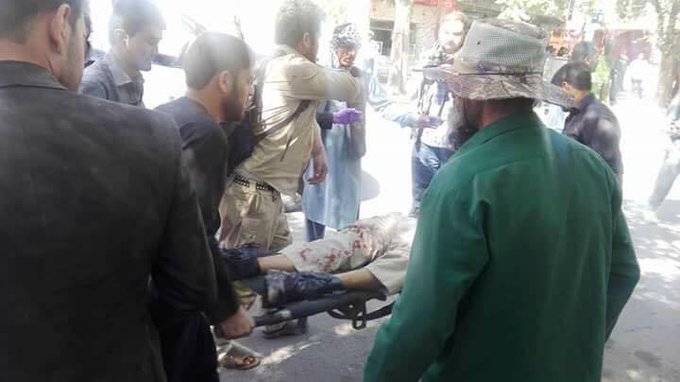 Update: Dozens killed and more than 100 wounded in #KabulBalst#AFG
Photos from Social Media

Most victims are thought to be civilians, including employees of a local mobile phone company, Roshan, according to TOLO News.

Basir Mujahid, a spokesman for Kabul police, said the explosion was caused by a car bomb.

“It was a car bomb near the German embassy, but there are several other important compounds and offices near there too. It is hard to say what the exact target is,” Mujahid said, as cited by Reuters.

Eyewitnesses on social media said the blast was so strong it shattered all windows in nearby buildings.

“At around 8.30am the room was shaken and then we heard a very huge explosion. It was scary, for a moment I thought we were attacked and the explosion was in our office,” Ramzir Bakhtiar, a Kabul resident, told RT. He said the diplomatic quarter where the blast actually took place is situated around 500 meters (1,600ft) away from his office, but the shockwave was so powerful that it still caused damage to the building.

Photos posted on Twitter showed a thick pillar of smoke rising from the site of the explosion.

The BBC has confirmed in a statement that Mohammed Nazir, a driver who worked at the corporation’s Afghan office for four years, died in the explosion. Four BBC journalists were injured and taken to hospital. 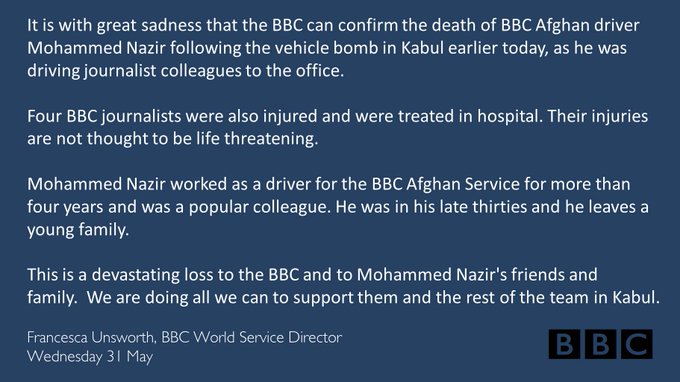 The German Foreign Ministry issued a statement saying that a local security officer guarding the embassy premises has been killed in the blast. Though several embassy workers were injured, all employees are now safe.

The car bomb went off in the close proximity to the diplomatic mission, the ministry said, adding that it targeted people who “worked for the better future of their country.” 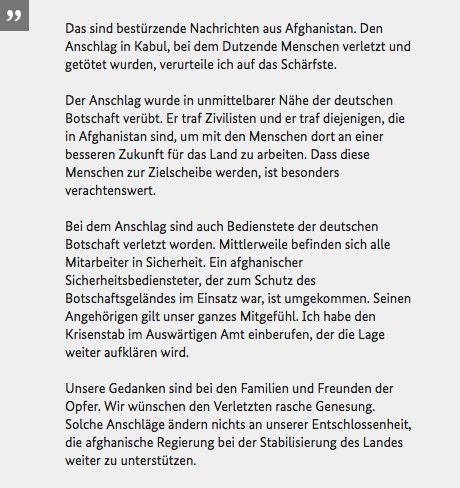 German authorities said they would temporarily suspend deportations of failed Afghan asylum seekers or migrants following the blast in Kabul.

“The employees [at the embassy in Kabul] have more important things to do than to prepare the organizational measures needed. Therefore there will be no collective deportations to Afghanistan in the next few days,” a German government official told Reuters.

“But it is and remains the case that deportations must be carried out according to our laws. This principle applies to Afghanistan, especially for criminals, and we will continue to go down this path,” the official added.

I condemn the horrific attack in #Kabul.My thoughts are with all those affected. #NATO stands w/ Afghanistan in the fight against terrorism.

In the meantime, France’s foreign minister, Marielle de Sarnez, said the French embassy in Kabul has been damaged, but there are “no signs” at this stage indicating that there were victims among the employees.

The Indian Embassy reported damage to its facilities but no casualties.

Hugo Llorens, charges d’affaires of the US embassy in Kabul, slammed the “horrific and shameful attack,” saying Washington is committed to helping the Afghan government defeat “small but despicable and barbaric cults” that undermine security in the country. 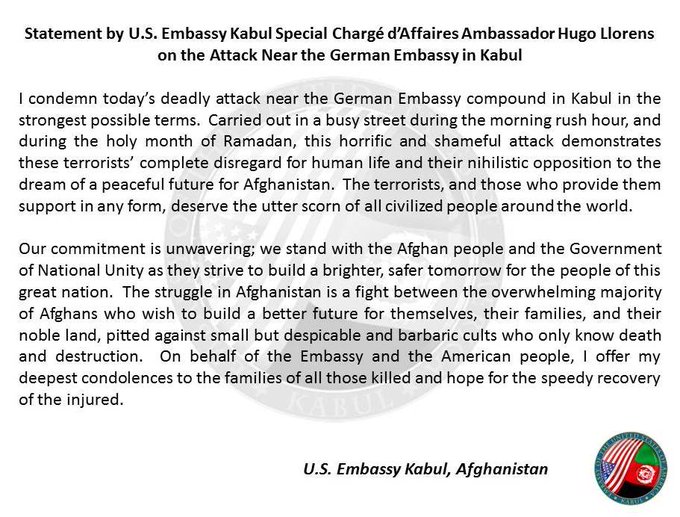 Statement by U.S. Embassy Kabul Special Chargé d’Affaires Ambassador Hugo Llorens on the Attack Near the German Embassy in Kabul.

Several journalists tweeted that their offices were damaged in the blast, including Jessica Donati, who writes for the Wall Street Journal, and the BBC’s Kabul bureau manager, Karim Haidari, who said the BBC staff were affected in the blast.

READ MORE: More than 50 feared dead in Taliban attack on Afghan forces base – US military

Taliban spokesman Zabihullah Mujahid said the insurgent movement had no involvement in the attack, according to Reuters. Mujahid claimed that the Taliban condemns indiscriminate attacks that cause civilian casualties.

Last month, the Taliban announced the beginning of a “spring offensive,” promising to attack US-trained Afghan forces and foreign troops. 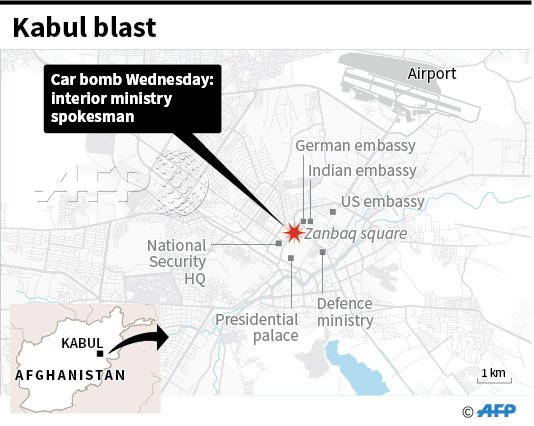 The US has 8,000 troops in Afghanistan to train Afghan forces and render support during counter-insurgency operations.