The prime minister said her plan would ensure that no one living lawfully in the UK will have to leave, and that EU nationals will not face the prospect of their families being split up.

Under her plan, EU nationals who have been in the UK for more than five years would be able to claim a new “settled status,” entitling them to the same rights as full British citizens to healthcare, education, welfare and pensions.

Those who have been in the UK for a shorter time would be able to stay until they hit the five-year threshold for settled status. Others who arrive after an unspecified cut-off date will be given a “grace period,” expected to be two years.

May said the 3 million EU citizens living in the UK should take “reassurance and confidence” from what she laid out at the European Council summit in Brussels on Thursday. She said although there are differences between the two sides, the UK was giving a “fair and serious” guarantee.

European Commission President Jean-Claude Juncker said it was a “first step, but not sufficient,” while the European Parliament’s Brexit coordinator Guy Verhofstadt said: “May’s ‘generous offer’ does not fully guarantee the rights of EU citizens living in the UK.” 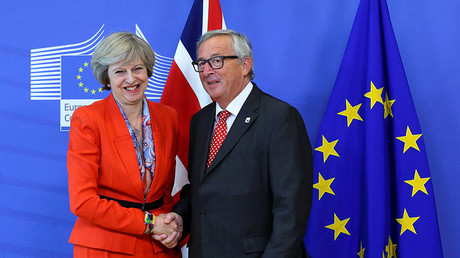 German Chancellor Angela Merkel said it was a “good start” but that there were many issues still to be resolved.

Tusk said the proposal was “below our expectations” and needed more detail. He said the EU wants to secure the “full rights” of all its citizens and British expats on the continent.

The EU will “analyze line by line” the UK’s proposals when they are published on Monday, Tusk said.

“My first impression is that the UK’s offer is below our expectations and that it risks worsening the situation of citizens,” he told reporters.
Joseph Muscat, the prime minister of Malta, who currently holds the rotating presidency of the EU, warned of the dangers of “pitfalls” in which people were “treated differently” depending on when they arrived in the UK.

“Everyone in Europe wants a situation where we have a blanket fair treatment of all our citizens.”

The EU has said the bloc’s citizens should continue to have the same rights as they do on a lifetime basis, enforceable by the European Court of Justice. The UK’s view is that British courts should have jurisdiction.

May said the issue would be one of the first to be discussed, and she wanted an agreement as soon as possible.