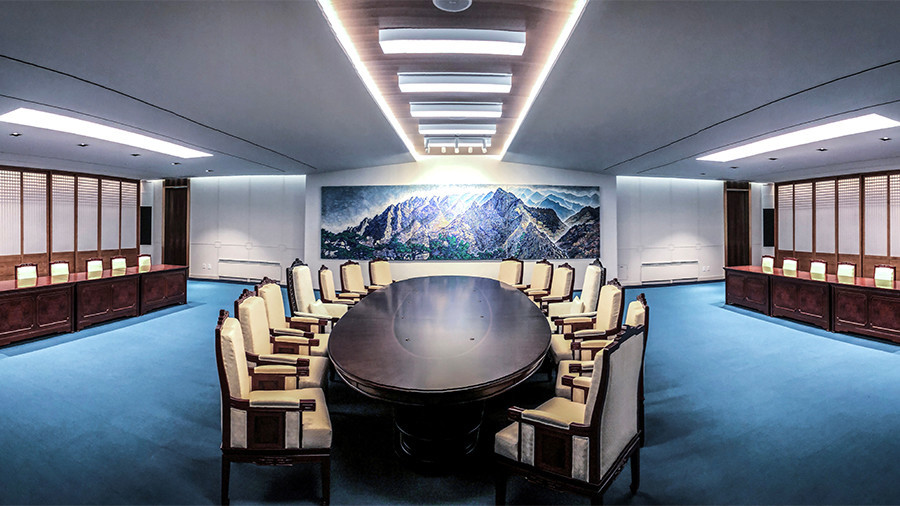 A general view shows the interior of the Peace House © Reuters
US President Donald Trump says a Peace or Freedom House at the border between the two Koreas would be a more “representative” place to meet than any third country. He threw out the idea on Twitter, noting he’s “Just asking!”

Numerous countries are being considered for the MEETING, but would Peace House/Freedom House, on the Border of North & South Korea, be a more Representative, Important and Lasting site than a third party country? Just asking!

US President Donald Trump says his much-anticipated meeting with North Korean leader Kim Jong-un will take place “over the next three to four weeks.

“It’s going be a very important meeting, the denuclearisation of the Korean peninsula,” Trump told a campaign rally in Washington Saturday. “But we’ll see how it goes. I may go in, it may not work out, I leave.” 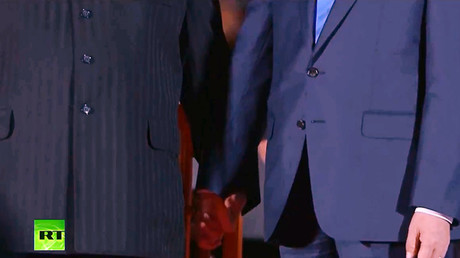 The date and venue for the talks between the US and North Korean leaders have yet to be announced, with Singapore, Mongolia and even the Russian city of Vladivostok suggested as possible locations by various media outlets.

Peace House was the site of the historic meeting between the leaders of the two Koreas last week.

During the first meeting of the leaders of the two Koreas in over decade, a declaration on “complete denuclearization, a nuclear-free Korean peninsula” has been signed. Kim and Moon also agreed to continue negotiations, involving US and China, in order to finally sign a peace accord instead of the truce that has been in place since the end of the Korean War in 1953.

The South Korean president’s office said on Sunday that the Pyongyang had promised to shut down its nuclear test site in May, with foreign experts and press invited to ensure “transparency.” Pyongyang also plans to shift its time zone 30 minutes earlier to align with South Korea.

The Peace House mentioned by Trump in his tweet is the same venue where Kim and Moon met on Friday. The three-story building was erected in December 1989 in the Joint Security Area (JSA) on the military demarcation line between the North and South Korea in order to host peace talks.

The Freedom House is another facility in the JSA, located some 130 meters away from the Peace House.

The outcome of Trump’s talks with Kim is hard to predict, as Washington has a lot of demands towards Pyongyang. US Secretary of State Mike Pompeo has said North Korea must take “irreversible” steps to rid the country of its nuclear arms program, while National Security Adviser John Bolton said the US wants to use a 2003 agreement to eliminate Libyan weapons of mass destruction program as a model for the North Korea negotiations. Back then, Libyan leader Muammar Gaddafi agreed to give up his weapons of mass destruction in exchange for the lifting of Western sanctions. The elimination of the arsenals was monitored by observers from the US and Britain. The statement raised some eyebrows, considering the fate of Gaddafi, who fell from power and lost his life following the Western-backed uprising in 2011.

North Korea has not commented yet on the summit with the US. In recent months, Trump has been touting what he calls a “maximum pressure” policy on North Korea. It includes harsh economic sanctions, frequent live-fire military drills with South Korea as well as name-calling, threats, and boasting about having a bigger nuclear button on Twitter. The US president has switched to calling Kim “very honorable” in anticipation of the talks, but his warning to abandon the negotiations if they turn out futile remains in place.