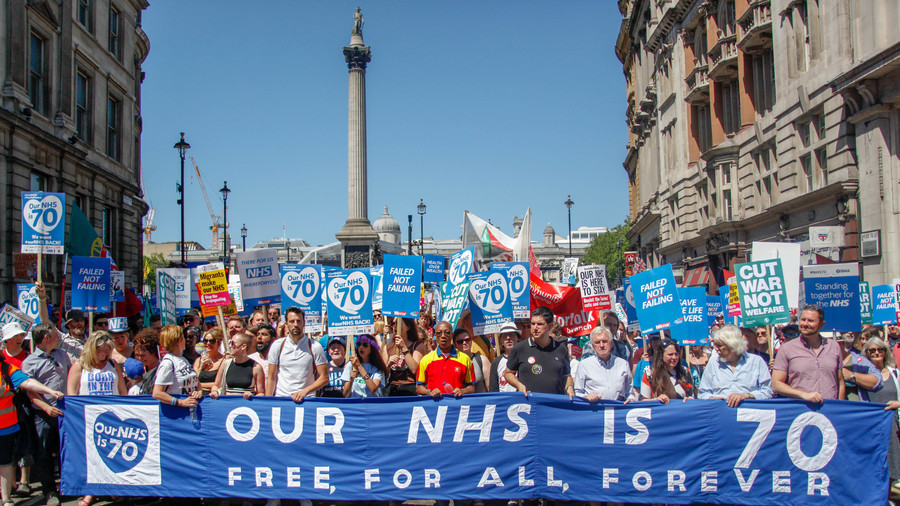 © Alex Cavendish / Global Look Press
As celebrations ring out for the NHS reaching it’s landmark 70th birthday, campaigners backed by the late Stephen Hawking lose their fight against US-style health bodies, which they say are the ‘Trojan horse for privatization’.

As celebrations ring out for the National Health Service (NHS) reaching its landmark 70th birthday, campaigners have lost their fight against US-style health bodies, which they say are a ‘Trojan horse for privatization’.

For many of the 1.5 million people who work in the NHS, as well as past and present patients or those who are simply cheerleaders for Britain’s cherished public institution, July 5 should be a day to rejoice its 70th birthday. However it’s not a day to celebrate for a group of NHS campaigners who were backed by the late world-renowned physicist Stephen Hawking.

The NHS is 70 years old. It’s something that we should be immensely proud of and protect at all cost. One of the foremost things that makes Britain Great. #NHS70

8 years ago today the NHS were there for me when I needed them the most. I cannot begin to express my gratitude. We are so incredibly lucky to have them. Selfless people working day and night to help at any given time

In the last 4 years i’ve asked the NHS to save my life twice. They didn’t let me down. #NHS70 pic.twitter.com/kiF0Pr96Rv

Activists backed by Professor Hawking and the British Medical Association (BMA), have lost a High Court challenge over proposals they say will open up the NHS to the market, allowing private companies to have greater influence within the public health provider, due to their complex structure.

Honorary Vice President of the BMA, Dr Kailash Chand, has claimed ACOs could be a “Trojan horse for privatisation”adding: “At worst, they are the endgame for the NHS,” the Mirror reports.

High Court judge Justice Green ruled on Thursday that the rolling out of ACOs was a “lawful” policy. He told campaigners they would have an opportunity to make their arguments during a public consultation, which Hunt will be “under duty to consider.”

Under Hunt’s stewardship over the past 6 years, the NHS has undergone a top-down reorganisation that has seen a transition towards Sustainability and Transformation Partnerships (STPs) and Accountable Care Organizations (ACOs)

In essence, it’s an attempt to integrate a myriad of health and social care services, whereby private companies are able to outbid in-house NHS providers for long multi-billion pound contracts and take a bigger slice of the NHS pie.

The Report is strongly critical of the whole way in which Sustainability and Transformation Plans, and the different organisational structures that they have spawned (STPs, ACSs, ACOs, ICSs and ICOs), have been introduced in a top-down way, with excessive secrecy

Before his death in March, Hawking had warned that the introduction of US-style accountable care organizations (ACOs), under the stewardship of Hunt, would see private companies run sections of the NHS and social services that would constitute an “attack on the fundamental principles of the NHS.”

Announcing his support for the legal challenge in December 2017, Hawking insisted that the NHS “must be protected from those who want to privatise it”. 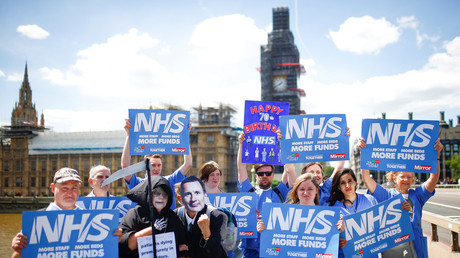 Hawking warned: “(ACOs) have not been established by statute, and they appear to be being used for reducing public expenditure, for cutting services and for allowing private companies to receive and benefit from significant sums of public money.”

Dr. Youssef El-Gingihy, a GP in Tower Hamlets, London and author of ‘How to dismantle the NHS in 10 easy steps’ told RT: “ACOs/ICOs [Integrated Care Organization] are being sold as integration of care, but in reality they indicate a shift towards US-style healthcare models with consolidation of privatization.

“They would enable 10-15 year multi-billion-pound contracts for health and social care for whole regions to be handed over to non-NHS, non-statutory bodies such as private healthcare and insurance companies,” he added.

The NHS was launched by the then Health Secretary, Aneurin Bevan, a Welshman in Clement Attlee’s Labour party, at Park Hospital in Manchester on July 5, 1948.

Hospitals, doctors, nurses, pharmacists, opticians and dentists were amalgamated to provide services for free at the point-of-use for the first time.

In the intervening years the NHS has pioneered new treatments like the world’s first liver, heart and lung transplant and all but eliminated diseases such as diphtheria and polio.