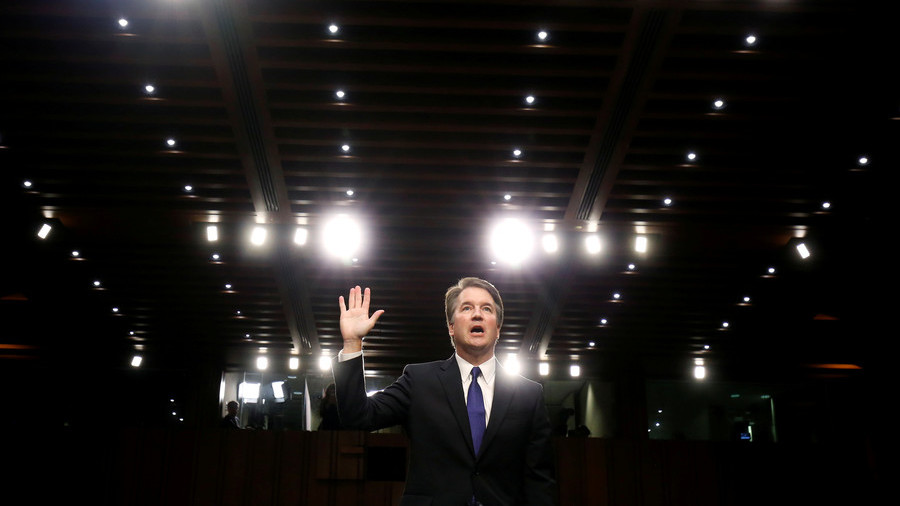 US Supreme Court nominee judge Brett Kavanaugh is sworn in during a Senate Judiciary Committee confirmation hearing, September 4, 2018. © Joshua Roberts / Reuters
The Senate Judiciary Committee has scheduled a vote on the nomination of Brett Kavanaugh to the US Supreme Court for Friday, a day after it is supposed to hear from both Kavanaugh and the woman accusing him of sexual misconduct.

On Thursday, the committee is supposed to hear from both the judge and Christine Blasey Ford, a California professor who says Kavanaugh attempted to rape her at a high school party sometime in the summer of 1982. It is not clear whether Ford will show up to testify, however.

The vote was initially scheduled for Monday the 24th, until Senator Chuck Grassley (R-Iowa) agreed to postpone it for the sake of hearing from Ford. Democrats on the committee, as well as Ford’s attorneys, demanded a FBI investigation into her claims. They also wanted to further postpone the hearing so Ford could drive from California to Washington, as she was reportedly afraid of airplanes, and that Kavanaugh testify ahead of Ford, which is at best unusual.

On Tuesday, Senator Dianne Feinstein (D-California), who sat on Ford’s allegations until after the Kavanaugh hearings were done, sought to further delay the hearing because another woman – Kavanaugh’s classmate from Yale – told The New Yorker he may have inappropriately exposed himself to her at a college party.

Deborah Ramirez, however, declined to appear before the Senate, where she would have to make a statement on penalty of perjury.

“There is no reason to delay the hearing any further,” Grassley wrote in a letter to Feinstein on Tuesday. Doing so would be unfair to both Dr. Ford and Judge Kavanaugh, who have both faced threats and intimidation against both themselves and their families, Grassley added.

Furthermore, Grassley said he was “unclear” why the claims by Ramirez had any bearing on Ford’s testimony. “In fact, the obvious connection between the two claims is that Senate Democrats hid both allegations of misconduct from the Committee and the public,” he added.

Kavanaugh has rejected the claims by both Ford and Ramirez, demanding a hearing to clear his name. He appeared Monday evening on Fox News in the company of his wife Ashley, to reveal that he was a virgin in both high school and college. 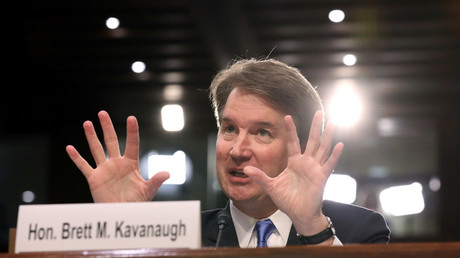 Kavanaugh says he was a virgin in high school, never sexually assaulted anyone

“I’ve never sexually assaulted anyone, not in high school, not ever,”Kavanaugh told Fox’s Martha McCallum, adding that he has letters testifying to his characters from high school and college classmates and coworkers going back decades, and multiple testimonies under oath to back him up.

The scheduling of the vote on Kavanaugh for Friday suggests that Grassley and the Republican majority are convinced the accusations against the judge are a stalling tactic by the Democrats, who have opposed President Donald Trump’s nominee from the start.

Kavanaugh was nominated to fill the spot vacated by the retirement of Justice Anthony Kennedy in June. Democrats reacted with to Kennedy’s retirement with alarm and anger, as he was considered an important swing vote on the court evenly divided between conservative constitutionalist and liberal activist justices. Kavanaugh’s nomination in July was met with organized protestsbefore his name was even announced.

Senate Majority Leader Mitch McConnell (R-Kentucky) on Monday hinted that his patience might be at an end, calling the accusations against Kavanaugh a “shameful smear campaign” and vowing to hold a vote on his nomination. McConnell had warned back in July that it was “important that President Trump’s nominee be treated fairly and not subjected to personal attacks.”

The GOP has sought to confirm Kavanaugh before the Supreme Court reconvenes on the first Monday in October. Delaying the confirmation further would push the vote beyond the November midterms, when the Democrats hope to win a majority in both the House and the Senate.