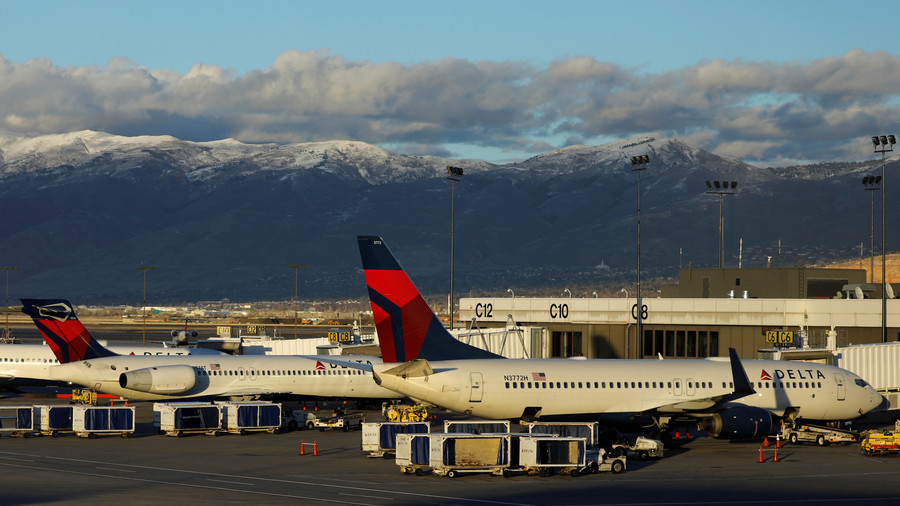 FILE PHOTO: Delta Air Lines planes are shown parked at their gates at the airport in Salt Lake City, Utah, U.S., January 12, 2018. © Mike Blake / Reuters
Delta Air Lines passengers across the US were left stranded for over an hour on Tuesday evening, after a technical issue forced the carrier to ground all domestic flights.

Customers of the Atlanta-based top-tier US airline took to Twitter to report the major system outage, which left incoming planes sitting on taxiways waiting for gates to open, and outbound flights unable to depart.

We are just now starting to move to an open gate after sitting parked for near an hour.

It’s not just checking in or flight status. No flight can leave the gates. We are sitting on plane for an hour waiting for the fix

Delta’s website also appeared to go down briefly, with passengers reporting that they could not log in to the system.

Website down @delta? Won’t let me login. Logged in before I got on this plane and during the flight to check gates. Now saying doesn’t recognize my name number or password. How’s it going?

In its initial statement, Delta blamed the disruptions on a “technology issue” affecting some of its systems. In order to restore operations to normal as quickly as possible, the airline said it had to issue a groundstop.

Within an hour of the announcement, Delta said it had resolved the issue and its systems were back up and running as usual.

“During the technology issue, Delta issued a mainline groundstop in the US until systems could be brought back up. There was no disruption or safety impact on any Delta flights in the air,” it stated.

Delta provides flights to over 300 destinations in some 60 countries. However, it was only domestic US flights that were grounded in all 48 contiguous states. “International flights are still ongoing,” Delta said in a response to a customer amid the commotion.

While it is not clear what caused the problem in the first place, it is known that Delta’s computer tracking system had not been working.

Looks like @delta is experiencing what looks to be a nationwide ground stop due to computer issues.

Hi Holly. Our computer tracking system is temporarily down. I suggest you reach back again in about an hour when our system should be back up and we will be able to assist you. *TKR