Amid Saudi-led bombing, Pompeo pins responsibility for starvation in Yemen… on Iran

Amid Saudi-led bombing, Pompeo pins responsibility for starvation in Yemen… on Iran 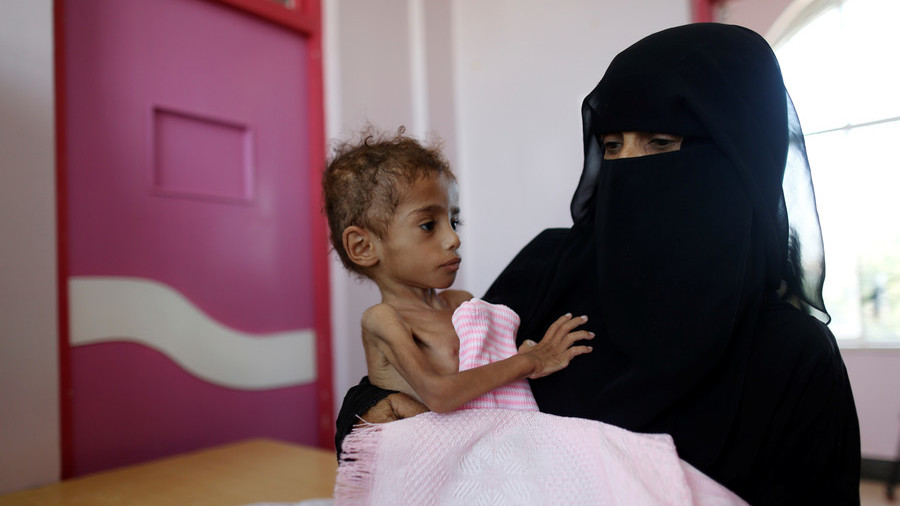 A woman holds her malnourished son in Sanaa, Yemen October 7, 2018. ©REUTERS/Khaled Abdullah
Saudi Arabia may be maintaining a blockade of Yemen and facing repeated accusations of indiscriminate bombing of civilian sites, but US Secretary of State Mike Pompeo says starvation in the country is Iran’s fault.

Yemen has been in turmoil for years and the Saudi-led coalition was involved over three years ago. The alliance sent its troops and warplanes to put an ousted president back into power, after he fled under pressure from the Houthi rebels, a group that the Saudi sees as a proxy force of its archenemy Iran. 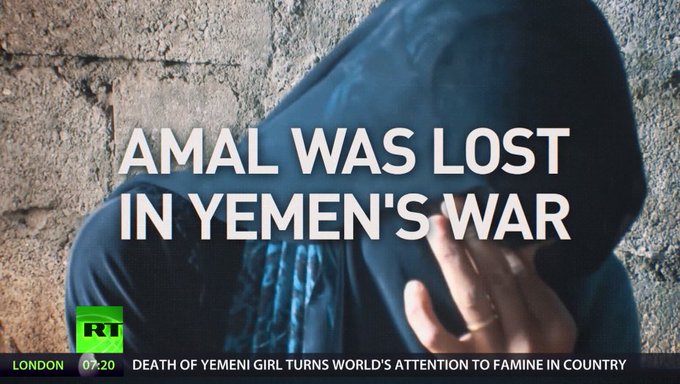 As part of its campaign, the Saudi-led troops imposed a blockade of the country, stifling the supply of food, fuel, medicine and other essentials. Activists claimed its warplanes have also bombed civilian infrastructure like water treatment facilities, hospitals and markets.

The result is what some observers openly call a man-made humanitarian disaster, with  millions of Yemenis estimated by the UN to be on the brink of starvation, and dozens dying each day from malnutrition and preventable disease.

But according to US State Secretary Mike Pompeo this is, to a large degree, Iran’s fault.

Much of the harm that’s taking place there comes from the fact that the Iranians continue to supply weapons and missiles to the Houthi rebels that are fighting there in Saudi Arabia. They are responsible for the starvation in Yemen as well.

Pompeo voiced the accusation on Fox News on Sunday as he was advocating a ceasefire in Yemen. The US believes that the Houthis should lay down arms first, after which the Saudi-led coalition may do the same.

The latter, which receives arms, air refueling and intelligence from Washington, reportedly responded to the calls of ceasefire by intensifying attacks on its Houthi opponents. Riyadh maintains, however, that its planes are hitting “legitimate military targets”

Meanahwile, residents of the Red Sea port of Hodeidah said constant air strikes are forcing them to stay indoors.

“All the people living between the airport and the university are trapped, the last four days have been very tough, it is beyond catastrophic levels,” Isaac Ooko, Hodeidah area manager for the Norwegian Refugee Council (NRC), told Reuters.

“Air strikes have been very intense and the hovering of the jets causes permanent anxiety.”

Despite what politicians and mainstream media may lead their audiences to believe, the support the Houthis receive from Iran is a far cry from what the Saudis claim, investigative journalist Max Blumenthal told RT.

They had re-commandeered billions of dollars of weapons that the US supplied to the deposed and dead dictator [Ali Abdullah] Saleh and worked alongside the Yemeni army, which was formerly supported by the US, not Iran. Iran is supplying some political and media support, but not the weapons that our government and the Saudis claim. So the idea of a proxy war is false.

Washington meanwhile has imposed sanctions on Iran and is threatening anyone doing business with Iranians with retribution. US officials claim this is meant to stop Tehran from sponsoring terrorism.

Fresh sanctions roll out to “put pressure” on Tehran. THESE are the freaks they want instead.@RaniaKhalek #Iran

The sanctions were re-imposed as the result of Donald Trump’s administration ditching an international nuclear deal with Iran, which was struck in 2015. Other signatories of the agreement, including the US’ closest allies, criticized the decision, calling it short-sighted.