As US leaves Syria, Bolton threatens Damascus with ‘strong response’ in case of chemical attack

Get short URL
FILE PHOTO. © Reuters / US Air Force / Shawn Nickel
As the US is preparing to withdraw its troops from Syria, it seems little has changed in Washington’s vision of the conflict: the Assad “regime” is still the problem, and Tomahawks are going to rain on Syria if WMDs are used.

Despite President Donald Trump’s announcement that he will withdraw the 2,000 US troops stationed in Syria being perceived as a sudden change in course on the ground, it appears that it has hardly affected Washington’s Syria policy in general. The latest thinly veiled threat of a strike on Syria was made by US National Security Advisor John Bolton on his way to Israel on Saturday.

ALSO ON RT.COM‘I never said fast or slow’: Trump has vague timeline for ‘sand and death’ Syria withdrawal“There is absolutely no change in the US position against the use of chemical weapons by the Syrian regime and absolutely no change in our position that any use of chemical weapons would be met by a very strong response, as we’ve done twice before,” Bolton told reporters on his plane shortly before landing in Tel Aviv.

While the schedule for the planned pullout remains unspecified, Bolton noted that the US would hold Syrian President Bashar Assad accountable for any incidents involving chemical weapons.

“As we elaborate how the withdrawal is going to occur and the circumstances, we don’t want the Assad regime to see what we do as representing any diminution in our opposition to the use of weapons of mass destruction,” he said. 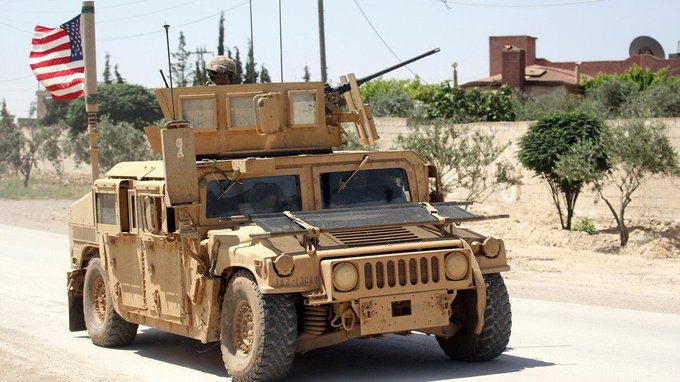 US ‘slowing things down’ on troop withdrawal from #Syria – top senator https://on.rt.com/9lj6

“A lot of options would be on the table… if [the Syrian government] don’t heed the lessons of those two strikes, the next one will be more telling,” Bolton said. It wasn’t the first time the official has promised a “much stronger” response to chemical weapons use in Syria. He made a similar statement back in September 2018.

ALSO ON RT.COMBolton promises ‘much stronger’ response if chemical weapons used in SyriaThe US has squarely blamed Damascus for almost every chemical weapons incident in Syria while refusing to consider any other side as a possible culprit. Evidence that did not fit the accepted narrative has been routinely ignored by Washington and its allies.

In April 2018, the US, France and the UK launched a massive strike, in which they targeted the Syrian government’s military and civilian facilities. The strike was conducted following an alleged chemical weapons attack in the town of Douma, 10km north of Damascus. At that time, Washington and its allies chose not to wait for an international chemical weapons watchdog’s probe to begin.

The West’s version of the incident was disputed not only by Russia and Syria, which said it was a false-flag operation staged by militants entrenched in Douma, but even by some Western journalists who actually dared to report from the field.

US effort to ‘counter Iranian aggression’ would continue along with ‘protection of Israel’ just as it had before – Pompeohttps://on.rt.com/9llg

The US and Israel’s Syria-related operations will not end despite the withdrawal of America troops from the country, Secretary of State Mike Pompeo said, reaffirming Washington’s ongoing commitment…

A fact-finding mission sent by the Organization for the Prohibition of Chemical Weapons (OPCW) to Douma eventually provided mixed results as it said that while no nerve agents were discovered on the site of the alleged attack, some chlorine compounds were detected by one of its laboratories. Another OPCW laboratory only reported finding “no CWC-scheduled chemicals,” meaning nothing banned under the Chemical Weapons Convention.

ALSO ON RT.COMUK admits Assad to stay ‘around for a while’ – and it’s all because of Russia againA year earlier, a chemical attack in the northern city of Khan Shaykhun was also squarely blamed on Assad. Washington similarly launched a missile attack on a Syrian Army airbase days after the incident without waiting for any investigation.

In contrast, a militant shelling of residential areas in Aleppo last November, in which some chemical munitions were used, went almost completely unnoticed by the West. Washington specifically dismissed the reports of dozens of injured civilians while claiming the whole incident was staged by Moscow and Damascus, and “likely used tear gas against civilians.”