‘For peace and stability’: Russia and Iran prepare for joint naval drills in Caspian Sea

‘For peace and stability’: Russia and Iran prepare for joint naval drills in Caspian Sea

“We have established a very good and lasting relationship with the countries in the Caspian Sea region,” Rear Admiral Hossein Khanzadi told the Mehr news agency, saying that the wargames “will be implemented in the near future.” 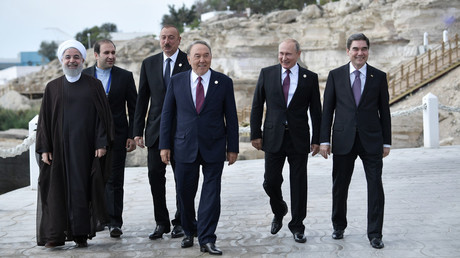 Previous joint exercises held by both navies in the sea took place in 2015 and 2017.

The Iranian commander added that “tactical, rescue and anti-piracy”scenarios would feature as part of the exercises, and noted that cooperation between both navies had “strengthened in recent years.”

He ended by praising wider Caspian Sea cooperation as a “model for guaranteeing peace, stability and friendship,” and noted that “all countries bordering the region are following the same approach.”

Enclosed by land and bordered by Russia, Iran, Kazakhstan, Azerbaijan and Turkmenistan, the Caspian Sea is rich in offshore oil and gas deposits worth trillions of dollars. Pipelines leading from the sea connect Central Asia and the Caucasus region with the Mediterranean.

In August, the Caspian 5 signed a historic agreement on trade, security, and the environment after 20 years of diplomatic wrangling. It also included agreements on joint military cooperation, as well as an agreement that no country from outside the region would be able to deploy troops or establish military bases on the sea’s shores.

ALSO ON RT.COMIran’s military kick starts five-day naval drill in Caspian Sea (VIDEO)The security deal was a blow to the interests of the US administration and NATO, who have now found themselves locked out of establishing any military presence in the region. They had previously set their sights on enlarging the defense bloc to include Azerbaijan’s neighbor, Georgia.