Stone pleads not guilty to obstruction, lying to Congress in Mueller probe

Stone pleads not guilty to obstruction, lying to Congress in Mueller probe

Get short URL
Roger Stone arrives for his arraignment at US District Court in Washington, U.S., January 29, 2019. © Reuters/Leah Millis
Roger Stone has entered a not guilty plea in federal court in Washington, DC. The former advisor to US President Donald Trump is facing seven criminal counts as part of US Special Counsel Robert Mueller’s Russia investigation.

ALSO ON RT.COMRoger Stone’s indictment offers more proof of no contacts between him and Julian Assange – WikiLeaksThe indictment said Stone told members of Trump’s 2016 presidential campaign that he had advance knowledge of plans by WikiLeaks to release damaging emails about Hillary Clinton.

Speaking after his arrest, last week, Stone said the charges against him were false and “politically motivated.”

“There is no circumstance whatsoever under which I will bear false witness against the president,” the 66-year-old said. “I look forward to being fully and completely vindicated.” 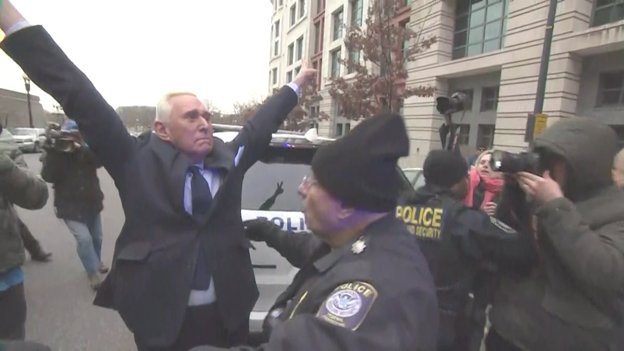 Roger Stone emerges from court after entering not guilty pleas and gives crowd his Nixon victory salute as he boards vehicle to depart as critics chant “lock him up.”

The charges faced by Stone are the latest development in the ongoing the Mueller probe which is examining alleged collusion between Trump and Russia during his election campaign.

In the aftermath of Stone’s arrest, his lawyer Grant Smith said his client is “vindicated,” by the fact that the indictment against him does not mention “Russian collusion,” and instead charges him with relatively minor process crimes.