Get short URL
© Reuters / Carlos Garcia Rawlins
The US State Department has raised its travel advisory warning for Venezuela to “do not travel,” citing civil unrest. The move comes after the White House stepped up efforts to remove President Nicolas Maduro from power last week.

The department issued the Level 4 red warning on Tuesday afternoon, warning Americans to avoid the country due to“crime, civil unrest, poor health infrastructure, and arbitrary arrest and detention” of US citizens.

The new travel advisory warns Americans of “ongoing political instability” and the possibility of getting caught up in violent street demonstrations which can occur “with little notice.” 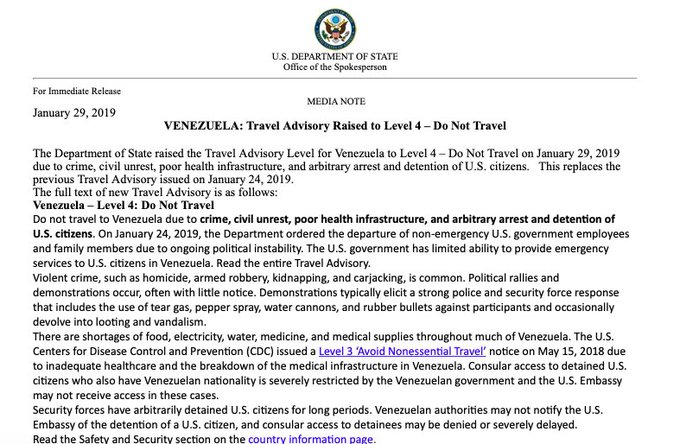 The warning “strongly” recommends that private US citizens leave Venezuela, putting Venezuela in the same category as Syria and North Korea. It comes days after the US ordered the evacuation of non-emergency personnel from its embassy in Caracas, which has left it with “limited ability” to provide emergency services to US citizens there.

The US stepped up pressure on Venezuela last week, recognizing the opposition leader as the “interim president” and calling on Maduro to step down. Washington imposed fresh sanctions on Venezuela’s state-owned oil company PDVSA on Monday, prompting accusations from the country’s foreign minister that the US was staging a coup to seize control of Venezuela’s oil reserves.

ALSO ON RT.COMUS gives opposition leader Guaido control over some Venezuelan assetsEagle-eyed journalists spotted the words “5,000 troops to Colombia” scrawled on a notepad carried by US national security advisor John Bolton on Monday, prompting speculation that the US was considering some sort of military operation to oust Maduro. The White House previously said it was not ruling out a military option for the country.