‘It is the sin of Salem’: West Hollywood’s gay mayor refuses to resign over sex assault allegations

‘It is the sin of Salem’: West Hollywood’s gay mayor refuses to resign over sex assault allegations

While Duran has built a political career on cheekily expressing his sexuality, the lawsuits have piled up.

ALSO ON RT.COMPoliticians jump ship as Jussie Smollett hate hoax sinks amid revelationsFirst the city paid $500,000 to settle a sexual harassment lawsuit against Duran from his former deputy Ian Owens. Duran hired Owens as his deputy after meeting him through Grindr and having sex with him.

Now, more allegations of harassment have surfaced, from the Gay Men’s Chorus of Los Angeles, a choir that Duran once chaired. Its members accused the mayor of unwanted groping and inappropriate comments. Several members alleged that Duran cornered and fondled them, before slipping away when they expressed shock.

ALSO ON RT.COM‘Homosexual extremists’ remarks come back to bite 2020 hopeful Tulsi GabbardDuran dismissed the allegations. “Am I the only gay man in town who uses bawdy sexual humor? Or says inappropriate things?,” he wrote in a Facebook post last week. “So, will I resign?,” he concluded. “Those of you who know me – well know the answer. HELL NO.”

Some of Duran’s alleged victims spoke at a council meeting on Tuesday, at which the council’s five members vowed to limit the mayor’s term to one year, and to search for ways to legally oust Duran from the position. 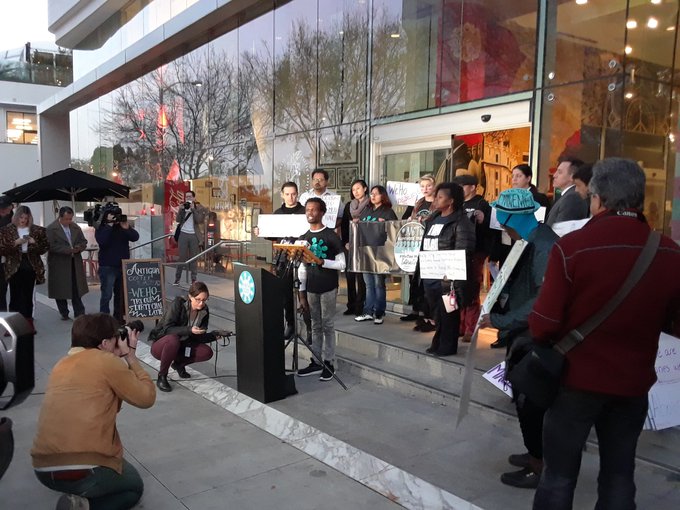 I was present for the protest and city council meeting tonight. John Duran not only has harassed gay men in our community but has represented Ed Buck who is at best guilty of manslaughter and at worst a serial killer. He needs to resign NOW.

ALSO ON RT.COM‘Gay cake’ row: Supreme Court rules in favour of Christian bakersIf Duran were to be removed from his position, he would become a regular city councilman again. A petition signed by 20 percent of registered voters in the city would be the only way to push him out of the council for good, local news outlet KTLA reported.

Duran isn’t the only gay political figure in California to face public outcry. Protesters who converged on Tuesday’s City Council meeting also demanded the council take action against Ed Buck, a prominent Democratic donor and LGBT activist. Two gay black men were found dead at Buck’s Los Angeles apartment in the last two years, with one of them alleging before his death that Buck supplied him drugs and coerced him into sex acts.