Brexit in the balance: May speaks as British lawmakers prepare to vote on her new deal

Brexit in the balance: May speaks as British lawmakers prepare to vote on her new deal (WATCH LIVE)

Get short URL
PM Theresa May speaks in Parliament © Reuters / Reuters TV
British Prime Minister Theresa May faces a day of reckoning as MPs vote on her “new improved” Brexit deal on Tuesday evening, with just 17 days until the UK is scheduled to leave the European Union.

May’s deal and her authority on Brexit remain in the balance, with prospects of her securing the backing of parliamentarians fading fast and a no-deal Brexit scenario growing ever more likely.

Opening the Brexit debate up, the prime minister struggled terribly with her voice, to bring back memories of her nightmare speech at the 2017 Tory Conference, when she was hit with a severely sore throat.

May warned that failure to vote for the deal could lead to there being no Brexit at all, in what may be seen as a plea to Tory Brexiteers and Labour MPs in ‘Leave-supporting’ constituencies in the UK.

The ERG, the hardline Brexiteer group who have pushed for the complete removal or significant legal changes to the Irish backstop are reportedly poised to vote May’s deal down.

The Times’ deputy political editor, Sam Coates, reports that the ERG’s lawyers at “Star Chamber” have concluded that the prime minister’s “improved” proposal “does not provide any exit mechanism from the protocol [the Irish backstop].”

The DUP’s leader Arlene Foster has revealed via social media, that her party will vote against May’s deal, claiming that “the risks remain” as the UK would be unable to “lawfully exit the backstop were it to be activated.” 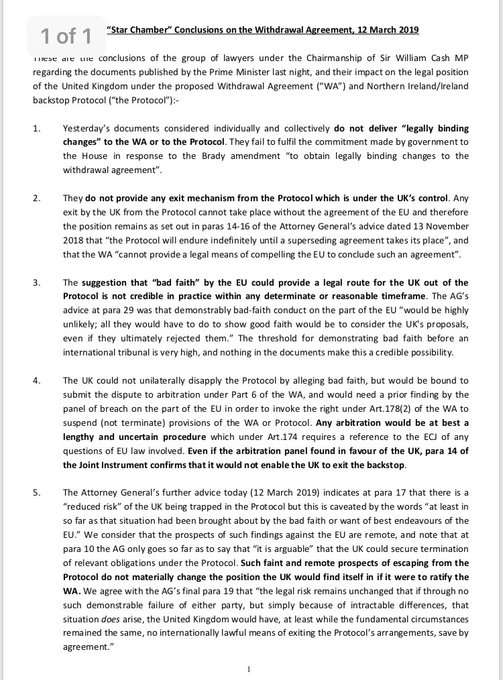 NEW: ERG legal advice. Proposal “does not provide any exit mechanism from the Protocol” 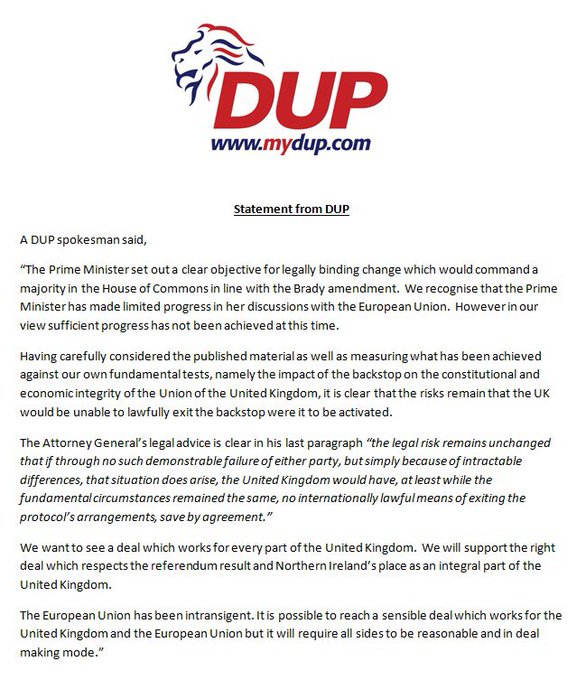 European Commission President Jean-Claude Juncker warned on Monday night that it [the vote] would be the last chance for Britain to pass a negotiated divorce with the EU before the Marсh 30 deadline.