‘Zero chance’ of slave reparations happening, despite current debate on the subject – analysts to RT

‘Zero chance’ of slave reparations happening, despite current debate on the subject – analysts to RT

Get short URL
Descendents of slaves file suit against US government and corporations for slave trade. © REUTERS/Jeff Zelevansky JAZ
Democratic presidential candidate Julián Castro has said he won’t rule out reparations to descendents of slaves, setting him apart from frontrunner Bernie Sanders — but is such a policy a real possibility or an empty promise?

In an interview with CNN on Sunday, Castro, the Obama-era housing secretary and former mayor of San Antonio, addressed the idea which has gained traction among more left-leaning Democrats, saying that the US should address the “original sin of slavery.”

Castro also acknowledged that there was a “tremendous amount of disagreement” about how that should be done and said he would “appoint a commission or task force” to determine the best course.

But the chances of reparations ever happening in the US are extremely slim, political analyst Charles Ortel told RT.

ALSO ON RT.COM#BlackLivesMatter calls for slavery reparations, free education & justice reformsWhile the question of some kind of reparations, even direct payments, to the modern-day descendents of slaves will appeal to some elements in the Democratic Party base, Ortel said the idea has “zero percent chance of ever becoming law in the United States in 2019 or afterwards” and that a pro-reparations stance is “not mainstream in the slightest.”

Ortel said that it was important to remember that while the number of African slaves who entered the US was large, they were still “a small proportion of all the traffic that occurred,” noting that the “overwhelming majority” of slave transfers were from Africa to Brazil and the Caribbean.

“To figure out truly just how tied modern descendents, who are African Americans, are to the slave trade is a very complicated matter,” Ortel said, adding that people needed to give more consideration to how the slave trade actually worked. Ortel noted that Africans themselves “were involved in selling captured enemies in tribal or in national warfare.”

No one can win the nomination let alone the Presidency running on Repartitions. Once elected a Pres committed to racial justice can make changes, but running on Reparations is campaign suicide. Castro‘s role is to stop Bernie. Afterall, he has as much chance of winning as I do. 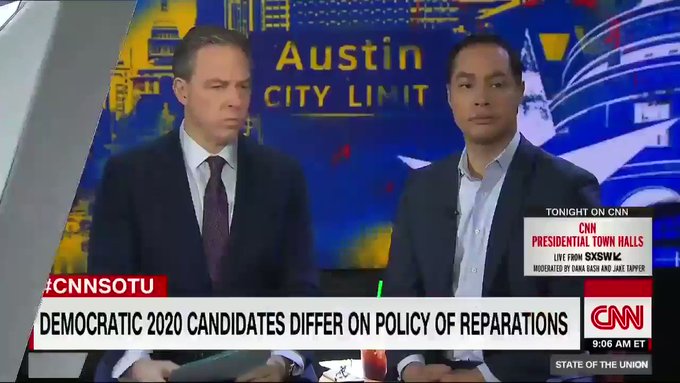 369 people are talking about this

“So when you examine who is responsible for the slave trade, it’s not as if the Americans or other foreign nations acted alone. They acted in concert with African nations,” he said.

Not only do those nations share the blame for past events, Ortel argued, they also share the blame for modern-day slavery in places like Libya. The slave trade has flourished in the North African nation since NATO’s 2011 intervention to overthrow Muammar Gaddafi, which left the country a failed state.

So rather than spending a lot of time and energy trying to trace ancient claims, it would be far more productive for nations to join together and eradicate the practice of slavery which is ongoing right now.

That would be a better use of time than focusing on something which is “never going to pass or make it into law,” he said.

ALSO ON RT.COMImperial legacy: Jamaica demands slavery reparations from BritainSome of Ortel’s comments were echoed by political commentator Brian Logan, who told RT that promises of reparations are just “empty rhetoric” and said there are too many logistical issues surrounding how such a policy could ever be implemented.

Logan noted that there are wildly varying figures being thrown about as to how much each individual should receive, with “ridiculous” numbers as low as $2,000 and as high as $500,000 per person being suggested.

Then there is the question of where the money would actually come from. “If the money comes from the federal government, that means that black Americans would be paying for their own reparations” through rising taxes, he said.

Logan added that it was an easier process for the US government to pay out reparations to the descendants of those who were incarcerated in Japanese internment camps during WWII because “you could clearly define” who was interned and compensate their relatives directly.

In the case of black Americans, “you really can’t define who was hurt, it’s been too far gone now, if reparations were to happen, it should have happened right after slavery ended” and not 150 years later.

Julian Castro went after @SenSanders on the issue of reparations today – a position Castro has never supported before and doesn’t even support today! He says we should talk about it. Wow. Unless he means reparations for Wall Street, which is what Castro largely did do at HUD.

1,124 people are talking about this

In that context, Logan said that while he was not a Bernie Sanders supporter, the Vermont senator “makes a lot of sense”and is “just being honest” when he offers other incentives in areas like education and healthcare instead of the more complicated and likely unworkable solution of reparations.