Invite Trump but not Putin? WWII anniversary without Russia is just rewriting history

Invite Trump but not Putin? WWII anniversary without Russia is just rewriting history

Get short URL
Prime Minister of the UK Arthur Neville Chamberlain waves the Munich Agreement (1938), which conceded the Sudetenland region of Czechoslovakia to Nazi Germany. © Global Look Press
Having US and former Axis leaders attend the 80th anniversary of WWII, but not inviting Russia, shows the event in Poland has nothing to do with paying respects to history, and everything to do with present-day politics.

The German invasion of Poland on September 1, 1939 is universally considered as the start of the Second World War. To mark 80 years since that fateful date, the Polish authorities have chosen to invite “present allies and partners in NATO and the EU” to a commemoration that has been moved to Warsaw for the occasion.

This means US Vice President Mike Pence will be at the ceremony, alongside the leaders of many countries that were members of the Axis during the war – from Germany and Italy to Bulgaria, Croatia, Hungary and Romania. Yet Russia will not be welcome.

ALSO ON RT.COM‘Russia’s role in WWII has been distorted by Anglo-American media’ (RT documentary)For the past week the media in both Poland and the West have harped on about the non-aggression pact signed by the USSR and Germany on August 23, 1939 and known as Molotov-Ribbentrop, after their respective foreign ministers.

The pact “doomed half of Europe to decades of misery,” argued the governments of Poland, Estonia, Latvia, Lithuania and Romania this week, pointing out that its anniversary has since been declared the “European Day of Remembrance for Victims of Totalitarian Regimes,” by which they mean “Nazism and Stalinism.”

It’s a bit baffling the Latvians are complaining about Nazism, actually, since they keep celebrating their participation in the Waffen-SS. As for the Romanians, would those “victims” include their 3rd and 4th Armies that got crushed at Stalingrad? Which, for the geographically challenged, is about 1,500 kilometers east of the Romanian border…

Today, much of the West believes that Nazism and Communism were “two sides of the same toxic coin,” as one Federalist contributor put it. Whatever happened to “This man is your friend, he fights for freedom” posters of Russian soldiers the US printed during the actual war?

The end of the Cold War happened, with NATO giving into temptation to march eastward. Justifying that move required establishing a retroactive continuity of sorts, recasting WWII as a struggle of “democracies” against “totalitarianism.” The notion that Germany, Italy and Japan saw the error of their ways in 1945 and joined the victorious and virtuous West to become its pillars only adds to the narrative, naturally.

Conveniently forgotten among the talk of Molotov-Ribbentrop are all the deals European powers made with Hitler, from the Four Powers Pact of 1933 and the Polish-German Pact of 1934, to the 1938 Munich agreement partitioning Czechoslovakia and the non-aggression treaties the Baltic States made with Berlin in the summer of 1939.

Poland also seems to have forgotten how its “allies” Britain and France did absolutely nothing to help it face the Blitzkrieg, or that its government never declared war on the USSR, despite all the talk of “invasion and occupation.”

Especially forgotten is how, once Hitler broke his word yet again and attacked the USSR in June 1941, it was the Soviet soldiers who would do the lion’s share of fighting and dying to defeat the Nazis – about 80 percent of it, to be exact. Or how anywhere up to 27 million Soviet citizens perished in the war the USSR did not start, but certainly did finish.

Note that it’s the UK – the same country that led the way in giving away Czechoslovakia to Hitler at Munich – that now clamors the loudest against (nonexistent) Russian “revisionism”! Let’s be frank, there is a vast moral chasm between countries that fought that war to survive – like the USSR – and those who entered it to save their empire, or carve out a new one. Instead, the West and its newest allies harp on Molotov-Ribbentrop, tear down monuments to the Red Army, or celebrate the SS – only to act bewildered when Russia tries to correct the record. Moscow’s exhibition of the pact documents and statements about its historical context have been described in the Western press as a “campaign to justify” the treaty.

The conclusion of the Soviet-German Non-aggression Pact was an urgent, forced and extremely difficult decision for the #USSR 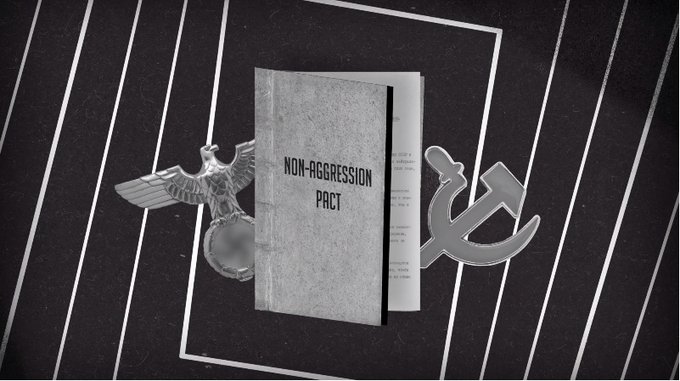 Personally, I sympathize with the frustrations of Poles and Czechs to some extent. Yugoslavia, too, had guarantees from Britain – and France, before it was crushed in 1940 – that turned out to be worthless. Its government also sought refuge in London, only to be betrayed by the British in 1944, in Churchill’s infamous partition of Eastern Europe with Stalin.

The fact that Warsaw chose not to invite Serbia – Yugoslavia’s foremost successor – to the commemoration on September 1 suggests that the event has little to do with lofty moral principles and legitimate historical grievances, and everything to do with present-day political opportunism.

So be it. But the East remembers.