No prosecution for James Comey, despite violating FBI rules & his own contract

No prosecution for James Comey, despite violating FBI rules & his own contract

Comey violated both the FBI policies and his own employment agreement when he leaked sensitive information about Trump to the New York Times, according to DOJ Inspector General Michael Horowitz’s report, released Thursday.

Despite the clear findings of wrongdoing, however, the former FBI director will face no prosecution for the mishandling of memos.

Comey’s memos detailed his private interactions with Trump, including a claim that the president asked him to “let go” of an investigation into his former national security advisor, Michael Flynn.

Comey admitted in 2017 that he gave sensitive but unclassified information to a friend with instructions for that person to share it with a reporter. He also admitted that he did this with the intention of ensuring Trump would be investigated —  a ploy which was successful, as former special counsel Robert Mueller was drafted to investigate claims of Russian “collusion” soon after.The information leaked by Comey was enthusiastically cited in the media as proof of “collusion” between the 2016 Trump campaign and Russia — a narrative which Comey helped to promote while frequently lecturing Americans on morality and justice following his firing.

Claims of collusion were deflated by the release of the Mueller report in April 2019, after a two-year-long investigation. 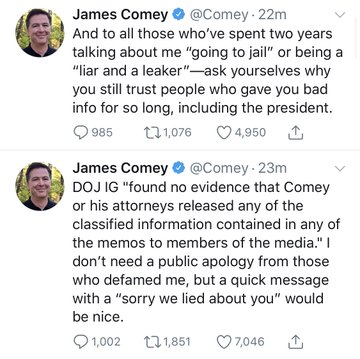 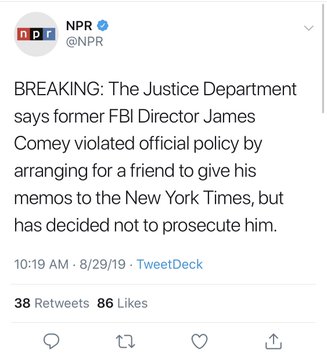 The former FBI director has maintained a holier-than-thou attitude, however, claiming he only ever acted in the interests of the country, not himself. The new DOJ report begs to differ, concluding that he acted to “achieve a personally desired outcome.”

The DOJ report also panned Comey for having kept copies of some memos in a personal safe at his home, even after he was fired, again violating FBI policy which would have required him to “seek authorization” to retain them. He also provided copies of some memos to his three private attorneys, again without approval.

Why, then, will there be no prosecution for the former FBI director?

Horowitz referred Comey’s case to the DOJ earlier this month, but the department decided not to bring charges, reportedly because they felt they lacked enough evidence of criminal intent and worried that going after him on a technicality would “look petty and vindictive,” according to the Hill.

Comey told Fox News last year that he believed his memos were not part of official FBI records, but his own personal aide-memoire. “I always thought of it as mine,” he said.Responding to the new report, Comey took to Twitter to demand apologies from people he said had “defamed” him, honing in on a line in the document which noted that he did not share “classified” information with the media (something Trump accused him of multiple times).

Online, reaction to the new report ranged from anger and outrage over Comey“getting away with” it, to emotional defenses of Comey the “American patriot.”

Many pundits also speculated facetiously that he was likely next in line to be hired by CNN as a contributor.