Get short URL
FILE PHOTO. © Reuters / Mark Makela
Former US Vice President and presidential hopeful Joe Biden has launched a broadside attack on Trump, calling for a probe into his scandalous phone call with Ukraine’s leader and accusing him of systematic “abuse of power.”

Biden produced the angry rant on Saturday when asked by a reporter if he’d spoken with his son Hunter about his business dealings in Ukraine, referring to the allegations that, while serving as VP, Biden Senior had shielded his son from a corruption inquest there. The 2020 presidential hopeful denied this, pointing fingers at Donald Trump instead.

“You should be asking him the question: why is he on the phone with a foreign leader, trying to intimidate a foreign leader?” Biden asked. “This appears to be an overwhelming abuse of power.” He then dismissed the question about Hunter and Ukraine, saying “everybody who’s looked at it said there’s nothing there,” and urged the reporter to ask “the right question” instead. 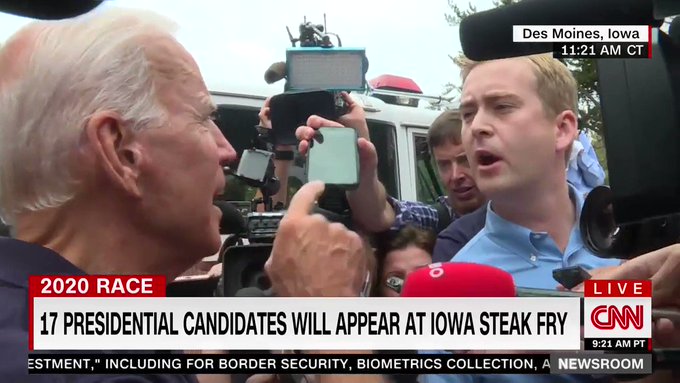 Biden was referring to the phone call between Trump and his Ukrainian counterpart, Volodymyr Zelensky, that took place back in June, but has now become central to the impeach-Trump movement, after being tied to a fresh whistleblower complaint. It alleges improper conversations between Trump and an unspecified “foreign leader.”

The allegations were followed by a string of bombshell reports, that suggested that the US president had repeatedly pressured Zelensky into investigating an allegedly corrupt scheme in the country that had involved Biden’s son, who is 49. Those reports were met with outrage from the Democrats, who branded the scandal a “constitutional crisis” and renewed their calls for the impeachment of Trump. Biden Senior, for his part, urged the US President to release a full transcript of the conversation with Zelensky.

But he didn’t stop there; he also called Trump a “serial abuser” of power who is trying to use “smear” tactics, fearing the Democrats might beat him in next year’s race for the White House.

Trump’s doing this because he knows I’ll beat him like a drum!

Trump, who’s been vocally dismissive of Biden’s chances of beating him in 2020, has brushed the whole Zelensky story off as “political hack job,” repeatedly attacking the “fake news” media. He also attacked Biden in a Twitter rant on Saturday.

“The Fake News Media and their partner, the Democrat Party, want to stay as far away as possible from the Joe Biden demand that the Ukrainian Government fire a prosecutor who was investigating his son, or they won’t get a very large amount of U.S. money, so they fabricate a story about me and a perfectly fine and routine conversation I had with the new President of the Ukraine,” Trump wrote in his own onslaught.