Get short URL
A Brexit-themed billboard depicting Russian President Vladimir Putin. © AFP / Daniel SORABJI
An investigation into Arron Banks, a backer of a pro-Brexit campaign, found no evidence that the money for it came from a third party. The political establishement claimed he was illegally pouring Russian funds into the endeavor.

The UK’s National Crime Agency (NCA) announced it has shut down investigation into Banks after finding no evidence he broke the law in loaning £8 million ($10 million) to his own pro-Brexit campaign Leave. EU ahead of the 2016 referendum. The loan came from the company Rock Holdings Ltd, owned by Banks, and went to Better for the Country Ltd, which managed the campaign.

The Electoral Commission referred the case to the NCA last year, saying it suspected a third party was the original source of the money. In a public statement on Tuesday, the NCA said it found “no evidence that any criminal offences have been committed” by Banks. Likewise, no evidence was found that he “received funding from any third party to fund the loans, or that he acted as an agent on behalf of a third party.”

The NCA’s announcement is the second blow to the narrative in as many weeks. Earlier, the Metropolitan Police said they will take no further action against Banks and Leave.EU over alleged spending offences. That probe was also launched at the request of the Electoral Commission and found “some technical breaches of electoral law” but “insufficient evidence to justify any further criminal investigation,” the statement said.The third party was presumed to be the government of Russia, which many Remainers accuse of boosting their Leaver opponents financially and with clandestine activities on social media. This notion may, for some, ease the pain caused by the cringeworthy way the UK is now parting ways with the EU, but it has a few problems in terms of actual evidence.

Banks, who said he was being targeted by a biased Electoral Commission and pro-Remain politicians and journalists in a smear campaign, is now able to take a victory lap. “Victory is sweet .. poor little remainer!” he tweeted in response to one of his critics sharing the news. Banks also threatened the commission with a £10 million lawsuit for damaging his reputation. 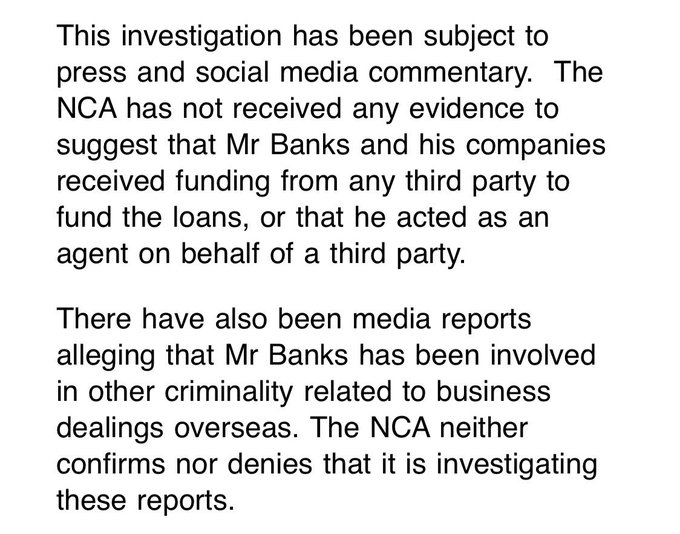 Nigel Farage, who was Banks’ partner in the Leave.EU campaign, said “heads must roll” for the mistreatment of the businessman, and that the commission should be first in line for the chopping block.

I am pleased that the NCA have cleared Arron Banks.

The appalling establishment campaign against Mr. Banks must now end.

Heads must roll – beginning with the @ElectoralCommUK who, without evidence, suggested that criminal offences may have been committed. Disgusting.

The commission lamented the NCA’s decision, saying it demonstrated an “apparent weakness of the law” that “allows overseas funds into UK politics.” Which apparently means they think that the problem was that investigators didn’t search hard enough, not that there was nothing there to find.

Our statement on the National Crime Agency’s announcement in relation to its investigation into Better for the Country and other associated companies and individuals https://www.electoralcommission.org.uk/statement-following-national-crime-agencys-announcement … 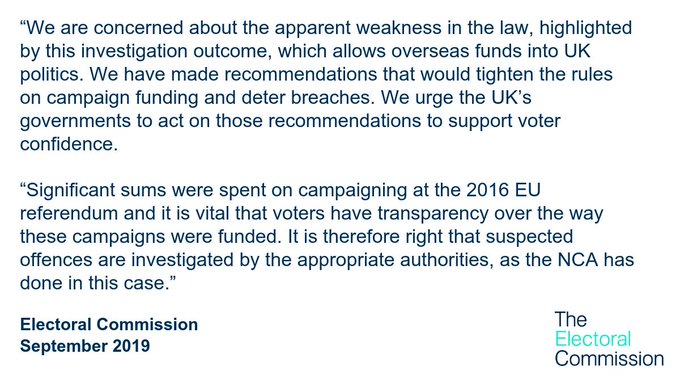 Hunting for the Kremlin’s shadow behind domestic troubles is a popular activity these days, especially since the consequences are insignificant for those involved when they are eventually proven wrong.