Get short URL
© Reuters / Henry Nicholls
Police are investigating Nigel Farage after he told a crowd he will “take a knife” to “overpaid” civil servants after Brexit for “not doing a neutral job.” Farage says he’d meant to say something far less bloodthirsty.

Farage made the comment while speaking at an event at the Neon Theatre in Newport last Saturday. In video footage from the event, Farage can heard saying:

“When the president of the port of Calais and the boss of the port of Dover tell you they’re 100% ready for Brexit in whatever form it comes, I suggest we listen to them and not the overpaid pen pushers in Whitehall who are not doing a neutral job”.

Trouble for Farage? Last night he said ‘we’ll take a knife’ to the ‘penpushers’ of Whitehall. Gwent police investigating https://twitter.com/gwentpolice/status/1177905350609162240 …

Replying to @EmbarrassedBrit and 10 others

Thank you for your message. We have been made aware of comments made last night in Newport and we are looking into these allegations. Thanks

When Brexit’s done we’ll take the knife to them. I’ve had enough of all of it’ 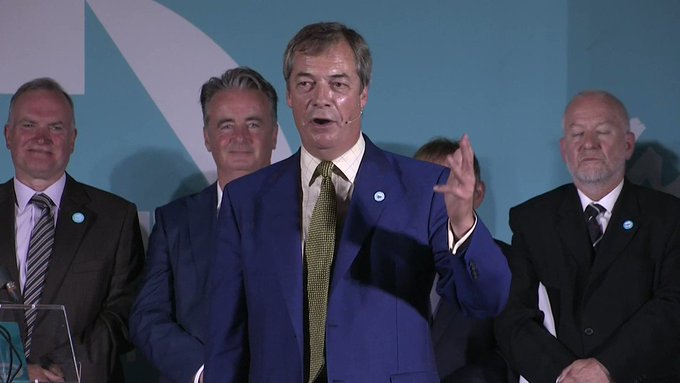 Gwent Police opened an investigation after receiving dozens of complaints about what some called“an incitment to murder.” Police responded via Twitter to journalist Carole Cadwalladr, and at least 36 others, to say they were “aware of comments made last week” and were “looking into these allegations”.

Farage responded to a new story about the investigation via Twitter to say he should have used the term “take the axe,” which, he says, “is a more traditional term for cuts.”