Giuliani has accused the mainstream media of “covering up the message, Dem[ocratic Party] corruption” and “going after me because I’m the messenger” in a tweet posted on Tuesday in response to the Biden campaign’s efforts to have him banned from television news. The media won’t hold Biden to account, the former New York mayor said, “because he is protected and immune like the Clintons and crooked Clinton Foundation!”

WP, NBC, and CNN are going after me because I’m the messenger, and covering up the message, Dem corruption. Meanwhile, they have yet to ask Biden difficult questions because he is protected and immune like the Clintons and crooked Clinton Foundation!

Insisting that Giuliani’s revelations about the corruption of Biden, his son Hunter, and Burisma Holdings, the Ukrainian natural gas company where Hunter mysteriously landed a cushy directorship are nothing but “false, debunked conspiracy theories” spread “on behalf of Donald Trump,” the Biden campaign wrote to “every major TV news network” on Sunday, demanding they not book Giuliani.

NEW: Team BIDEN just sent letter to every major TV news network, calling for RUDY to be kept off the airwaves. “He will knowingly and willingly lie,” letter says. 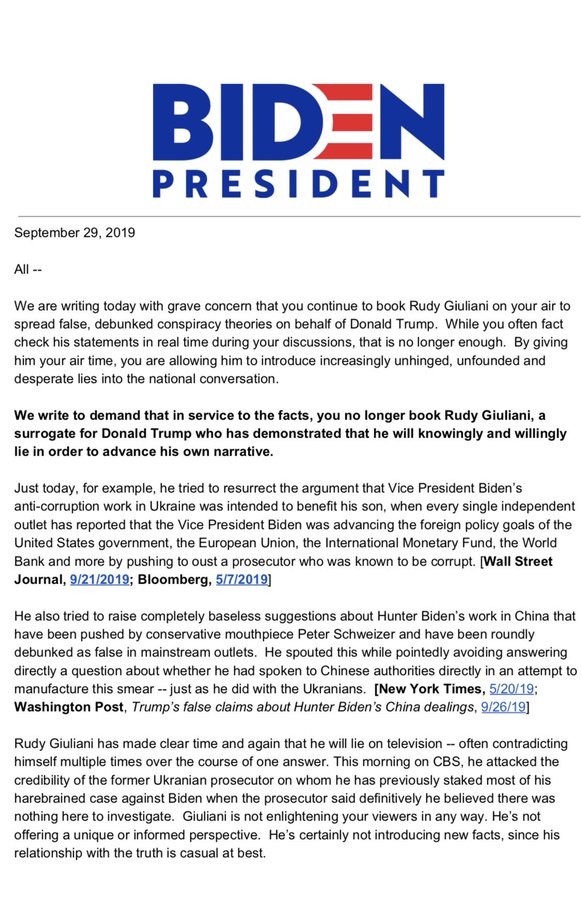 “He will knowingly and willingly lie in order to advance his own narrative,” Biden’s campaign warns – as if that doesn’t describe almost every other politician who’s ever graced the airwaves.

While Giuliani has been known to contradict himself, sometimes in the same interview, a presidential campaign attempting to have another politician blackballed from television is unprecedented. But Biden’s campaign wasn’t alone in calling for a prominent voice to be silenced for long.

“I think there’s plenty of now evidence to suggest that he is irresponsible with his words in a way that could result in harm to other people,” she told CNN’s Anderson Cooper on Monday. “So the privilege of using those words in that way should probably be taken from him.”Biden’s fellow Democratic presidential hopeful Kamala Harris called for President Trump himself to be banned from Twitter for “threatening” both House intel committee head Adam Schiff and the “whistleblower” whose report claiming Trump had threatened to withhold $391 million in military aid from Ukraine if prosecutors did not reopen a corruption probe into Burisma was used to launch an impeachment investigation last month.

RT’s Caleb Maupin asked New Yorkers what they thought about the effort to silence Giuliani. Even in the famously liberal city, people agreed that the public is smart enough to judge fact from fiction for themselves and said that everyone should get a voice.