Get short URL
©  REUTERS/Mike Blake
As a panel of Democrats fell over each other to pander for the rainbow vote at CNN’s LGBTQ town hall, conservatives raged at the inclusion of transgender children, but not at the Dems’ plans to shred the Bill of Rights.

It went exactly as you think it would have. Every candidate promised to pass the Equality Act, a bill that would amend the Civil Rights Act to “prohibit discrimination on the basis of the sex, sexual orientation, gender identity…or sex-based stereotypes,” and reverse certain acts of the Donald Trump administration, like its “ban” on transgender troops in the military.

With policy dispensed with, all that was left was for the presidential hopefuls to out-woke each other over four occasionally entertaining hours. Kamala Harris got whoops and cheers for introducing herself along with her preferred pronouns (she/her/hers, for those wondering), Julian Castro nodded along to a transgender activist calling herself ‘Shea Diamond’ declaring “misgendering” as an act of “violence,” and another trans activist called ‘Blossom’ interrupted a question from a child to accuse CNN of ignoring the plight of “black trans women.”

It is apparently—and bear with me here—violence to misgender or alter the name of a (and this is key, because it’s a special privilege afforded to no other group) trans person. 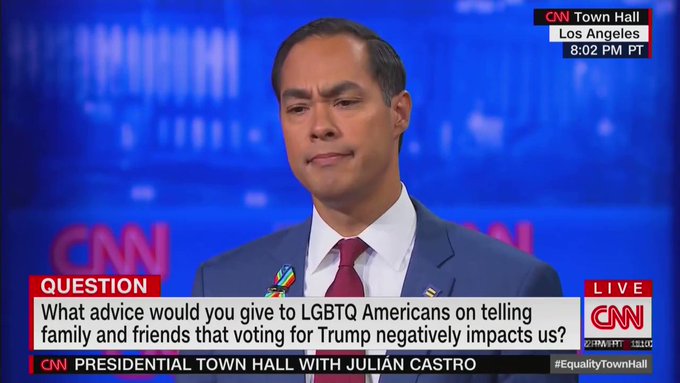 Watch the moment a black trans-woman, “Blossom,” snatches the mic from a mom and her young trans child to accuse CNN of silencing trans people of color.

No matter how hard you try, you can never be woke enough, CNN. 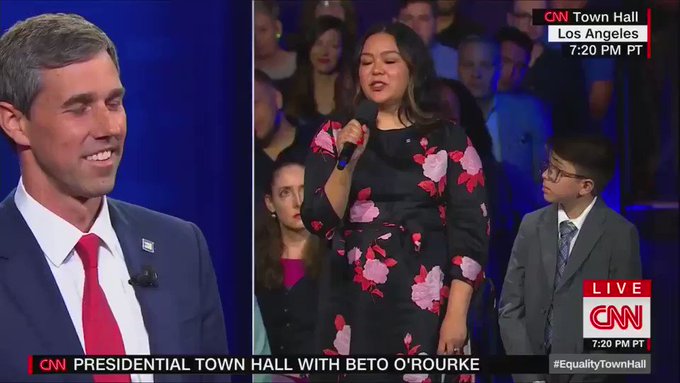 The inclusion of two nine-year-old transgender children – egged on by their activist parents – rankled conservatives. The kids pressed Beto O’Rourke and Elizabeth Warren on what they would do if elected to clamp down on bullying in schools. But according to the right, the children shouldn’t have been there in the first place.

“This mother is abusing her daughter, and Elizabeth Warren & CNN are applauding it,” one commentator wrote. 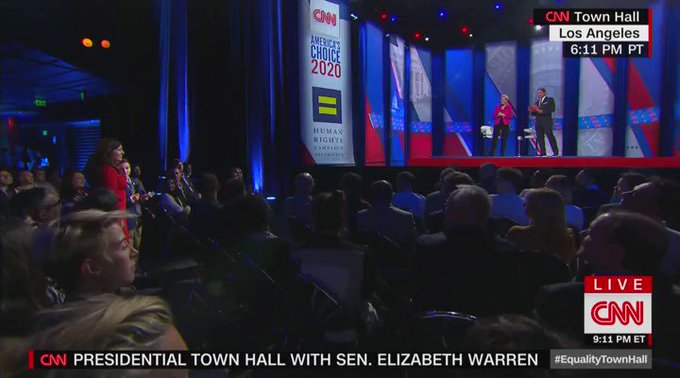 “Hi, my name is Jacob, and I’m a 9-year-old transgender American…”

The CNN producers who chose to exploit this child on national television are some truly sick monsters. #EqualityTownHall

However, far more insidious, no matter what your political persuasion, was the sheer totalitarian zeal on display. When candidates were asked what they would do to tackle states lagging behind on implementing the progressive agenda – referring to those 26 states that still prohibit blood transfusions from gay men and allow business to refuse service based on religious beliefs – the answer was uniform: crush them with federal legislation.

Warren promised to abolish the Senate’s filibuster rule – the 60-vote threshold needed for most legislation – to overcome Republican resistance to the Equality Act. The act itself may be beningly named, but by adding a person’s “gender identity” to the list of protected classes under Title IX of the 1964 Civil Rights Act it would force schools to open bathrooms to transgender students, override a parent’s decision not to allow their child to seek gender reassignment, and forbid threapists and doctors from cautioning these children against such procedures.

Put simply, the bill would equate those opposing gender transitions for children with the racists of the Jim Crow era.

State-mandated sexual assault is not equality, but it would be law under the Equality Act.Businesses who refuse to serve LGBT customers based on their own religious beliefs – like the baker in Colorado at the center of the ‘gay cake’ controversy – would be forced to comply under pain of federal law. So too would hospitals who refuse to carry out transgender surgery, and likely even beauty parlors that refuse to wax transgender women with male genitalia. This was the case in Canada when transgender activist Jessica Yaniv got more than a dozen waxing salons shut down after their female staff refused to wax ‘her’ testicles.

Even feminists have spoken out against the act, sounding the alarm at the prospect of transgender women being allowed to compete against actual women in sports, and at the idea of these biological men being housed alongside women in prisons – a policy championed by Warren.

The Equality Act would still occasionally clash with the First Amendment, which protects religious speech, and saw the aforementioned Colorado baker escape prosecution last year. Beto O’Rourke has a plan for that though, and told the crowd on Thursday that he would strip the tax-exempt status of every church, college, charity and religious institution that opposes same-sex marriage. This on top of the two dozen LGBT-focused executive orders he’s already promised on his campaign site. 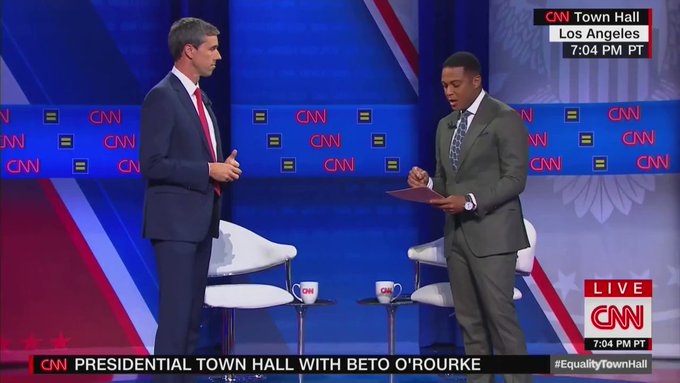 Is any of this surprising? After all, O’Rourke has already let the public know exactly what he thinks of the Constitution with his vow to confiscate every single AR-15 and AK-47 in America, so why not go after the First too?

Conservatives will likely ignore these warning shots, for fear of offending the LGBT lobby and being labeled backward and bigoted. They shouldn’t though. What the democrats displayed on Thursday was a four-hour paean to the totalitarian state, and a complete rejection of individual liberty, all wrapped up in cuddly rainbow packaging.

For all their talk of culture wars and their equating of Democrats to the communists of Soviet Russia, conservatives have been utterly spineless in resisting the flagrant trampling of individual liberty they swear to uphold. If the Republican party fails to locate its (trigger warning) balls up to and beyond the next election, pretty soon there won’t be a Bill of Rights left to conserve.