Poll calls for Piers Morgan to be sacked for ‘dehumanizing’ trans people, he hits back by slamming ‘snowflakes’

Poll calls for Piers Morgan to be sacked for ‘dehumanizing’ trans people, he hits back by slamming ‘snowflakes’

The outspoken 54-year-old has been the subject of a petition calling for him to be sacked for “dehumanizing” trans people, as well as reducing LGBT+ people and their causes to a “mere joke.”

‘Being a penguin isn’t a gender… There are people who are trans or non-binary and it can do real damage.’@benjaminbutter believes @piersmorgan should be fired for his views on gender following an online petition. #GMB 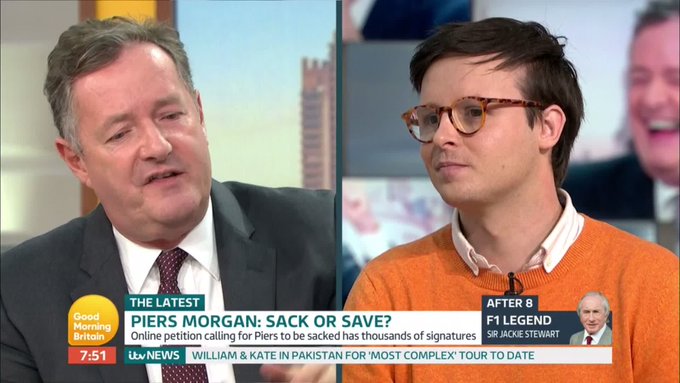 Good Morning Britain, the program he co-presents with Susanna Reid, ran a poll on Tuesday morning in response to the furor with the question: “Should Piers stay or should he go?” The final results showed that only 41 percent of viewers wanted Morgan to stay, while 59 percent were desperate for him to be ditched.

Morgan had earlier commented on the live poll, urging people to vote and save his job. “Let’s put the snowflakes firmly back in their box,” he exclaimed.

Following the viewers’ poll, Morgan then went head-to-head with gay journalist Benjamin Butterworth, who had signed the petition, over his “100 genders” comment.The TV host had previously reacted angrily to the petition, tweeting on Sunday that he was a supporter of gay rights but that he does not “support the ridiculous notion of 100 genders.”

If you can identify in 100 different ways… and all this other stuff, then I’m entitled to identify as a ‘two spirit penguin.’

Butterworth fired back: “Being a penguin isn’t a gender, it’s not on the gender spectrum. Nor is, to clarify, being a giraffe, squirrel or elephant.” He argued that young trans and non-binary people who tuned into Morgan’s breakfast show to see their identities being “mocked” could be damaged.

Morgan’s gripe was probably in reference to a recent BBC Teach video, which featured educator Kate Daniels telling pre-teen children: “We know that we have got male and female, but there are over 100, if not more, gender identities now.”