Slippery slope into degeneracy: Media keep sexualizing children and it must stop

Slippery slope into degeneracy: Media keep sexualizing children and it must stop

Get short URL
©  Instagram / desmondisamazing
We now find ourselves amidst an epidemic of perversion as disturbing content is shared far and wide by today’s major media. One of the most distressing subjects is the sexualization of children.

From gaming websites to news organizations, children are now props in a war on decency. Just last December, Desmond, an 11-year-old boy who has been described by Good Morning America as “trailblazing,” twirled around on stage in female attire as men whooped and hollered and threw money his way.

That isn’t a one-off instance. Throughout the past couple of years, other similar incidents have begun to stack up.

A 10-year-old drag queen named Lactatia released a photo earlier this year that showed him smiling as he stood next to a naked 27-year-old man. Another photo from the same shoot shows the young boy spreading his legs wide on a couch wearing a black dress and fishnet stockings.

Last month, Kotaku – a gaming website known for its diatribes opposing the sexualization of adult female characters in gaming – posted child pornography on their website. Photos depicted an underage digital model of Emma Watson sitting on a massive d**k. The same piece also featured cartoon drawings of a 10-year-old Pokemon character getting raped by creatures from the series.

ALSO ON RT.COMI am a trans woman – but I think this woke world has gone too farAt a pride event hosted at a public library in Washington state for teens and tweens, a drag queen suggestively danced after removing his skirt in front of the audience. The same event also gave out flavored condoms and lube.

Speaking of pride, during this year’s annual event, photos emerged of little girls playing with men engaging in pup play. For those unaware, pup play is a kink where people pretend they’re dogs, and live out their lives as such.

Arthur Chu is out here endorsing letting kids interact with grown adults engaging in fetish play. If THIS is what being woke is, I encourage more people to go back to sleep. 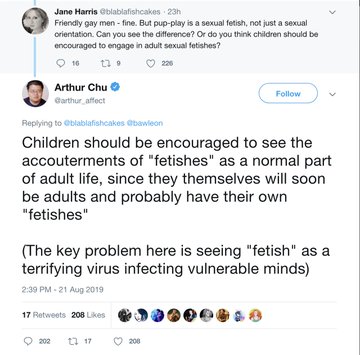 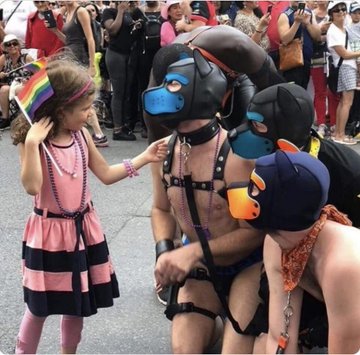 At the risk of sounding hyperbolic, Western values and societal norms are being tarnished from within. Behaviors once rightfully looked down and spat upon are becoming increasingly common; a feat accomplished due to a media accomplice that praises such actions as progressive. But what they highlight as liberation from gender stereotypes and norms has turned into nothing more than a grotesque parody of what we were always warned would occur.

In the ‘90s, a common argument in opposition to gay marriage was that it was a slippery slope. The logic went that if men could marry men, and women marry women, it’d lead to polyamory, bestiality, pedophilia, and every other ill the human mind can devise. As an LGBT individual myself, I heavily disagreed. I still do. Although, these days it’s become an increasingly unstable platform to support.

Public figures argue that kids should be introduced to kinks as a means of normalizing them, because they’ll “have their own fetishes” one day too. Lactatia is touted as inspirational and incredible, even as he tells others to “eat a d**k.” Desmond faked snorting ketamine while livestreaming with an adult drag performer as they read incoming comments such as “Hitler did nothing wrong.” This fact doesn’t bother media sites like the Huffington Post, which raise him as proof that the “future is queer.”

ALSO ON RT.COMDoctors & drugs FOR LIFE: Big Pharma’s profit on the transgender crazeThis should tell you all you need to know about what type of future the liberal media is hoping to build. But is this the future people want? Sure, we keep being told these kids are inspirational, but their social media popularity suggests otherwise. On Twitter and YouTube, Desmond only has 4,574 and 5,650 subscribers respectively. On Facebook, it jumps up to over 30,000, yet many of his posts bring in a reaction from less than one percent of them.

Over on Instagram, Lactatia only has 28,600 followers. As far as that site goes, this a lot smaller a fan base than one may think, especially as it pertains to an individual who the media considers an influencer. Even while keyword searching his name on Twitter, there’s not a lot of people explicitly discussing him.

Outside of the social media sphere, it still doesn’t appear that this content is anywhere near as popular as we are being led to believe. When an upcoming documentary about drag kids released a trailer on YouTube, comments were disabled.

This was a sure sign that they knew the reaction would be overwhelming negative. Likewise, when Good Morning America uploaded their segment about Desmond online, it was greeted with over 47,000 downvotes – a massive difference from the meager 2,600 ups. Browse the comments and ratings of any number of such videos, and a picture emerges that the majority do not accept this – regardless of what their political affiliation happens to be.

At this point, there’s no denying that the media is not at all tuned in to what people want. Years of clickbait and lies has already taken its toll on many publications’ reputations, but now a line has been crossed that isn’t excusable by any metric. They celebrate children dancing in drag to roomfuls of adults for money. They depict 10-year-olds having sex with cartoon characters. They boost images of children standing with naked adult men. They have turned impressionable children into disgusting displays of human sexual excess. Even Lactatia’s fans are called “Lactaters,” a sexually suggestive word if I’ve ever heard one.

Nothing presented above is bettering our culture. Where is the progress in this? How does this benefit gay rights, self-expression, or the lives of our nations’ youths? If anything, it’s damaging everything it touches as we further devolve into degenerates. Even something that should be as harmless as story time has been tainted. In March, a registered sex offender dressed in drag read to kids in a public library.

What is happening all around cannot go on. It is time for people to speak up and become vocal. A continuation of this behavior will only quicken the pace at which the decency of Western civilization crumbles. As a societal family, it is on us to take care of the children, and one must only look around to see that the kids are not alright.

By Sophia Narwitz, a writer & game journalist from the US.