Authorities in China have deployed drones to combat the spread of coronavirus in a variety of ways since the outbreak began, including disinfectant drones and drones that fly around with a loudspeaker to tell people they should keep their masks on. But there’s another way that police in China have started to use drones, and it makes you feel like we live in the future. But maybe not the future we were hoping for.

Police are flying drones around vehicle checkpoints with a large QR code that people are supposed to scan to register their health information. And while we didn’t believe it at first, reports from China’s state-run media indicate that it’s actually happening.

The drones are popping up in cities like Shenzhen in Guangdong province, where cops are using them in an effort to keep law enforcement officers away from the public. The drones broadcast messages with instructions on how to use your smartphone to scan a QR code and submit health info to a government-run website online.

Chinese state broadcaster CCTV tweeted photos of the drones, confirming that police officers are behind the new initiative to combat COVID-19, which has sickened killed 1,486 and sickened 65,183 more, according to the latest figures.

To prevent novel coronavirus, police officers use drones to carry a QR code at the expressway exits in Shenzhen, Guangdong Province, Feb. 11 for drivers to get registered with less contact with other people. #CombatCoronavirus 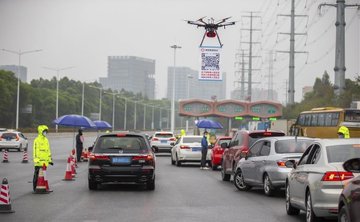 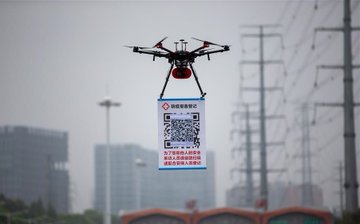 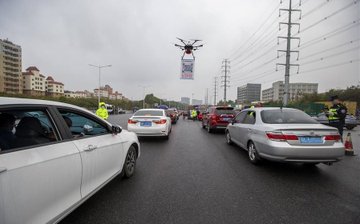 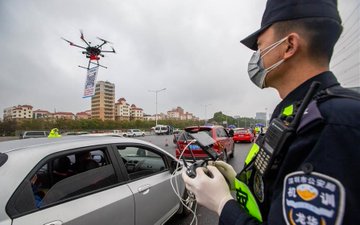 There are also people on Twitter posting videos of the drones, like this one from TikTok, shared on Twitter by Chinese state-run media outlet the Global Times, and this one that has been making the rounds on Twitter, presumably ripped from Chinese social media.

“Please open the window, take out your mobile phone, scan the QR code to register, and keep the successful interface,” the drone says, according to one English translation on Twitter.

How is #tech used in China’s battle against the #coronavirus? Drivers lining up to enter #SH scan the QR code on a card hanging by a #drone to fill in their health info 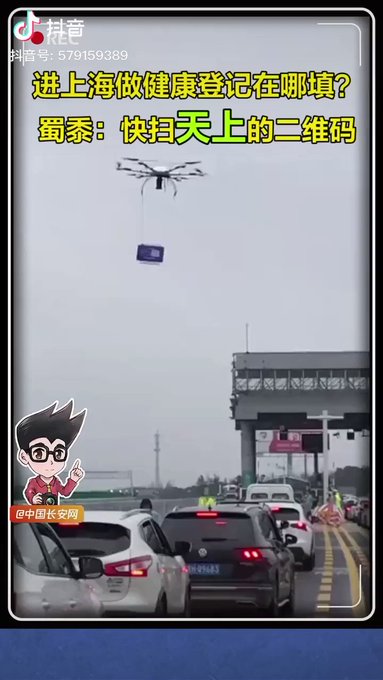 It’s certainly not the most dystopian use of drones the world has ever seen. That distinction obviously goes to US military drones that kill and injure hundreds of people every year around the globe. But there’s something very odd about the aesthetics of a police drone hovering over your head with a QR code during a major outbreak.

China is also using land-based robots in a similar way to its aerial drones, hoping to prevent human-to-human transmission of the virus. Many large cities in China are practically ghost towns, with places like Shenzhen (China’s Silicon Valley) almost empty as people hide indoors, but that doesn’t mean a lot of people don’t have to get outside.

People need to get food, many need to get to work, and still others just need to leave their homes to avoid going stir-crazy. Mental health in China is reportedly suffering as over 100 million are on virtual lockdown with no clear end in sight.

QR codes, a technology that’s much more common in Asia than it is here, are being used in other ways as well. In the Chinese province of Yunnan, people are reportedly required to scan a QR code at the entrance of many buildings to track the public’s movements.

We’re living in a sci-fi movie. Just not an optimistic one. We hoped that one day we’d wake up in the world of The Jetsons. Instead, it seems we’re closer to Children of Men.