After the Supermoon, Comes the Supertide

After the Supermoon, Comes the Supertide

Many locations along the UK, US and Australian coasts will experience their highest tides for tens of years around September 29 or 30. Coastal roads in Miami, for instance, have already been closed in anticipation of exceptional tides.

These high tides may bring water levels uncomfortably close to the tops of harbour walks and flood defences, emphasising the threat of rising sea levels. In the UK they are unlikely to be a major problem on their own unless they coincide with storms (a strong storm surge has a greater impact than even the most exotic of tides). However in other areas, like in parts of America and the Pacific, no storms are necessary: these high tides on their own can lead to nuisance flooding.

Why do we expect such extreme tides?
Tides are controlled by changes in the position and alignment of the moon and sun relative to Earth. Every fortnight – at new moon or full moon – the Earth, sun and moon are in an approximately straight line as seen from space and the additional gravitational pull of the sun causes stronger tides, known as spring tides.

Yet each month one set of spring tides is higher than the other. This is because tidal forces are strengthened when the moon is at “perigee” and its elliptical orbit takes it closest to Earth. Tide-generating forces are also enhanced when the moon is directly overhead at the equator, part of a cycle lasting 27.2 days – a so-called “draconic month”. 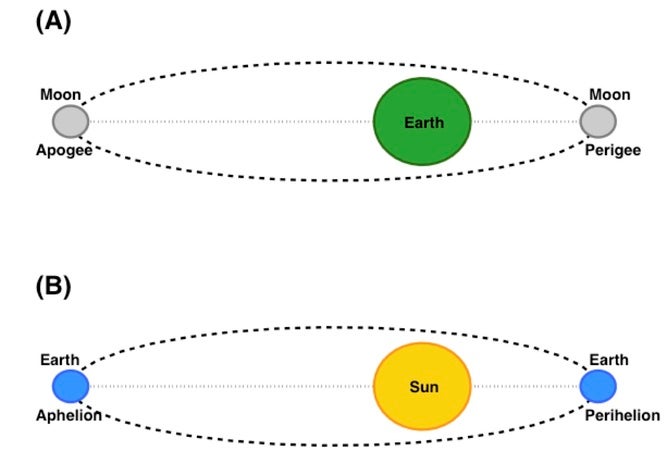 Tides can differ over the course of a year, as the Earth moves from its closest (perihelion) to furthest (aphelion) point from the sun and back. More important is the variation in the sun’s position north or south of the equator, which causes the seasons. The tide-generating forces are greatest at the equinoxes in March and September when the sun is directly overhead at the equator. Spring tides are always higher at these times of year.

A perfect tide?
Over periods longer than a year, very large spring tides occur when all the astronomical factors we have mentioned earlier coincide.

Two longer-term motions of the moon’s orbit around the Earth are important. These motions (astronomers call them precessions) are the reason we are seeing unusually large spring tides this year.

The first precession is known as the cycle of lunar perigee, and influences tides about every four to five years. The elliptical orbit of the moon around the Earth slowly moves in relation to the sun, completing a full circuit every 8.8 years. This means at either the March or September equinox approximately every 4.5 years the moon is both at its closest point to the Earth, and is also overhead at the equator.

One effect of this is to change how far above or below the equator the moon can reach in its orbit. In 2015 the moon is at the point where it deviates the least from the equator. This slightly increases the chances of the moon being directly overhead at the equator at any given point, and thus coinciding with the other factors that contribute to extreme tidal forces.

A lot of things have to fall in place at once to generate record-breaking tides and this year the cycle of lunar perigee and the lunar nodal cycle nearly perfectly coincide, resulting in some of the highest spring tides for decades.