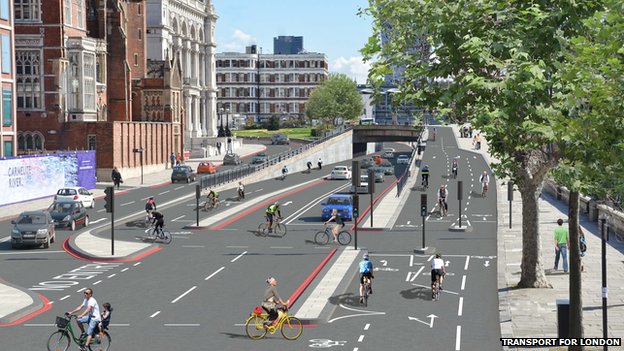 The consultation process seemed to drag on and on but now London Mayor Boris Johnson has decided to go ahead with his contentious flagship cycle superhighway.

The plan is to put a single segregated cycle lane along Embankment to link Hyde Park with Tower Hill.

The concern from some during the consultation was that it would increase congestion for motor vehicles by reducing the number of lanes.

Other businesses supported it as did thousands of cyclists.

The scheme became a lightning rod for the debate around the expansion of cycling infrastructure in London. 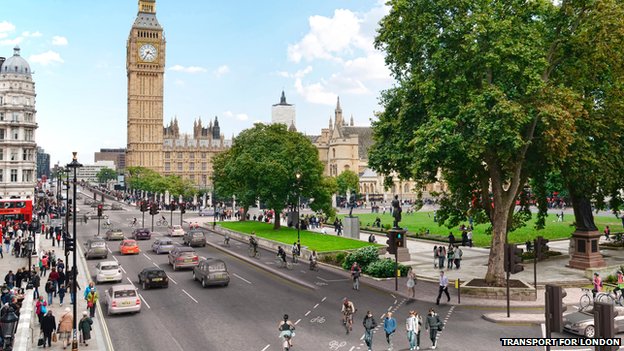 The routes are due to open in March 2016

Broadly speaking while there have been a few tweaks, from what I am told by Cycling Commissioner Andrew Gilligan, the scheme has not been dramatically altered.

There have been some alterations at three “pinch points” at Temple Tube station, Blackfriars Underpass and Tower Hill.

The original plan was to take out two of the four current motor traffic lanes but I’m told that won’t happen now and one vehicle lane will now be lost to create the cycle lane.

The plans will mean the cycle lane is squeezed from 4m (13ft) width down to 3m (10ft) in those three locations.

I’m told the 16 minute delays if you were driving westbound from Limehouse to Hyde Park have come down to six minutes as a result.

The final decision rests with the Transport for London Board on 4 February – which is probably a formality – so you could see construction work begin on the East West cycle superhighway in April.

Other work on schemes like the upgrade of CS2 could start the week after – on 9 February.

Court threat
The big question now is how will big business and those who don’t want the scheme react?

There was talk of a Judicial Review over the process.

Will that now be launched? Could this be dragged through the courts? That could scupper any attempts to get this in place before the mayor leaves City Hall in 2016.

Also, will cycling campaigners be happy with the compromises?

This scheme was seen by many as a crucial moment in the development of cycling infrastructure, not just in London but in the UK.

Certainly according to City Hall the cycling revolution is still on track.