How nutritional supplementation can help

BY ALEXANDRA PRESTON
POSTED ON MAY 31, 2015
http://naturalsociety.com/diabetic-neuropathy-can-be-treated-6-natural-solutions/

Neuropathy, or damage to the peripheral or autonomic nerves, is a common complication of diabetes. This not only causes losses in sensory and motor function, but can also lead to debilitating pain and even foot ulcers which may in turn lead to amputation. While conventional treatment is limited to good foot and nail hygiene, early detection of potential ulcers and strong painkillers such as antiepileptics and opioids, research has found that nutritional supplements are capable of even reversing nerve damage.

One of those nutritional supplements that can bring true relief to diabetic neuropathy is acetyl-l-carnitine. In a study involving 333 patients diagnosed with neuropathy, participants were injected with either 1000mg of carnitine or placebo for 10 days, and then given either 2000mg of the supplement or a placebo for the remaining 355 days.

2. Using Vitamin B12 For Diabetic Neuropathy

Additionally, mean pain scores were reduced from baseline by 39%. As this study was published in 2002, it’s surprising that the results aren’t common knowledge. Another study, this time comparing vitamin B12 injections to the drug nortriptyline in 50 patients, found that the vitamin injections were more effective than the drug. 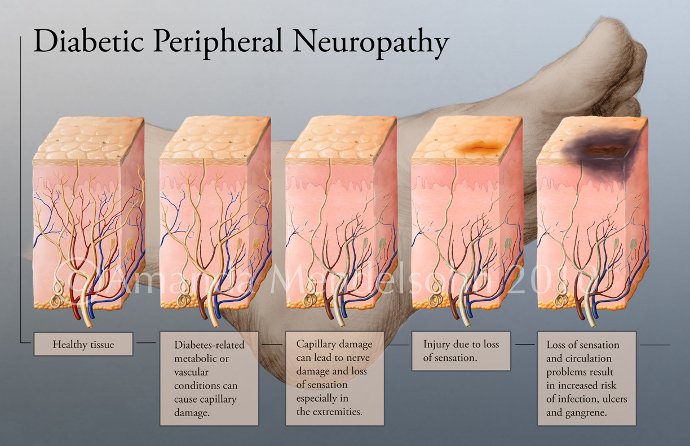 3. Biotin To The Rescue

In addition, biotin in high doses may improve the symptoms of diabetic neuropathy, even within 4-8 weeks. This may be due to the correction of the biotin-dependent enzyme pyruvate carboxylase, which prevents the accumulation of pyruvate and/or the depletion of aspartate. Both of these play an important role in nervous system function.

A 2003 review examined the evidence behind the use of evening primrose oil, alpha lipoic acid, and capsaicin in the treatment of diabetic neuropathy. Trials on evening primrose oil showed significant improvements in nerve function measurements and overall symptom scores compared to placebo.

Arm muscle strength improved by 4.9 points versus a deterioration of 7.4 points; arm and leg sensation improved by 6.9 and 15 points instead of decreasing by 7.3 and 8.4 points respectively ,and median conduction velocity improved 1.4-2.4 points against placebo deterioration by up to 2 points. The most significant improvement was an increase in leg tendon reflex function by 17.7 points, while the placebo group saw a slight gain of 0.5 points.

Alpha lipoic acid, another reviewed supplement, is actually approved for the treatment of diabetic neuropathy in Germany, partly due to its antioxidant properties and ability to improve energy metabolism and neural glucose uptake. It can even recycle other antioxidants such as vitamins C and E!

Research evaluated described significant reductions in pain and disability scores, as well as improvements in nerve conduction velocities, particularly the sural sensory nerve with an improvement of 3-3.8 metres per second. As for capsaicin, there were significant benefits in regards to pain relief over the placebo, with far more treated patients reporting benefit.

Although capsaicin only provides symptomatic relief of pain, its benefits should not be overlooked as the pharmaceutical treatment of neuropathic pain involves drugs with potentially dangerous side effects, while capsaicin is safe.

Overall, it is clear that the false pessimism dispensed by pharmaceutical medicine is neither necessary nor wise.