Euro Risk Due To Possible Return of Italy To Lira – Drachmas, Escudos, Pesetas and Punts?

Euro Risk Due To Possible Return of Italy To Lira – Drachmas, Escudos, Pesetas and Punts?

The European status quo and EU elites are becoming increasingly concerned by popular calls in Italy for Italy to leave the European Monetary Union and the euro “as soon as possible” and return to the lira. 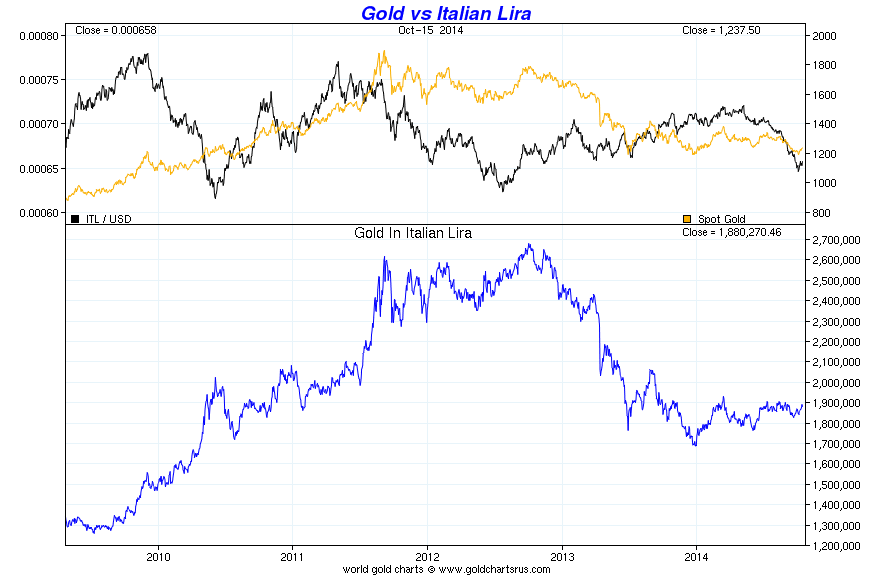 Beppe Grillo, the leader of Italy’s Five Star Movement has shocked EU elites by launching of a non-binding consultative referendum on the matter which will be put before the parliament.

“We will collect half a million signatures in six months – a million signatures – and we will take our case to parliament, and this time thanks to our 150 legislators, they will have to talk to us” the Telegraph reports Grillo, the popular comedian and increasing popular politician as having said.
Italy’s Five Star Movement has thrown down the gauntlet and believes that a return to the lira may be the only way to end the economic depression and indeed save Italian sovereignty and indeed democracy.

The movement, for whom 25% of Italians voted in last year’s general election, and a further 21% in this years European elections, appear to be upping the ante following the failure of the the EU bureaucracy and the ECB to acknowledge demands, last May, for the creation of Eurobonds to support the Euro and the abolition of the EU fiscal compact.

Both measures are staunchly opposed in Germany. They see the creation of Eurobonds as a means to make Germany responsible for the borrowing of struggling peripheral nations. 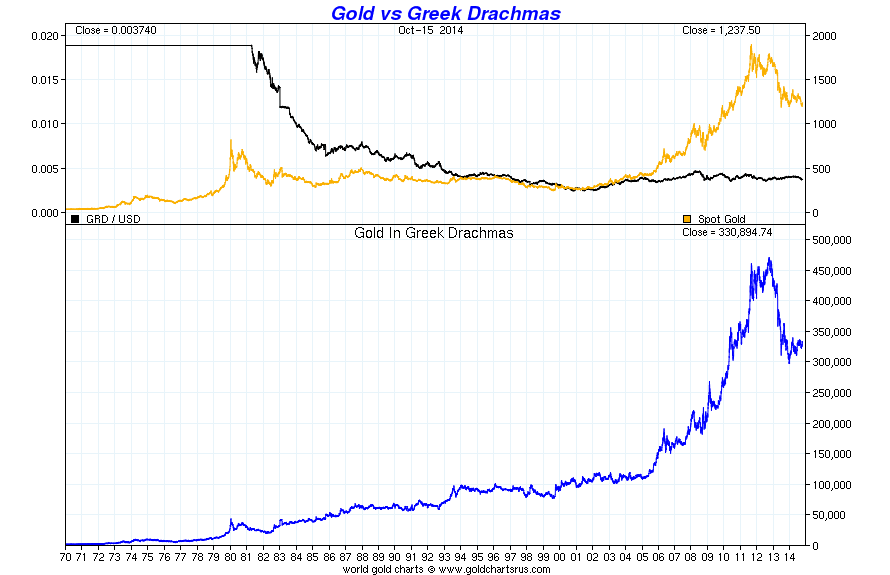 Peripheral nations such as Italy, Greece, Spain, Portugal and Ireland argue that they should not be made carry the entire burden of a problem caused, at least in part, by their participation in the monetary union.

The customary method of devaluing a sovereign currency in order to make their exports more competitive is not open to them.

The fiscal compact requires that Eurozone states keep a balanced budget. According to Ambrose Evans Pritchard, the respected International Business Editor of the Telegraph, the ”Fiscal Compact is economic insanity. It would force Italy to run massive fiscal surpluses for decades. These would cause an even deeper depression, pushing the debt ratio even higher, and would therefore be scientifically self-defeating.”

While it is still early to speculate on the outcome of this process, it is worth considering the implications of the fifth largest economy in Europe jettisoning the Euro.

At the height of the Euro crisis in early 2012 it looked possible that the entire monetary union project might rupture as the interest yielded on the bonds issued by the more vulnerable states began to soar. This has begun to happen again in recent days and Greek bonds have seen a new vicious sell off and 10 year yields have soared to nearly 9% (see below).

That is, investors in the bond markets had come to regard the bonds of Italy, Greece, Spain and others as high risk investments and required a much higher rate of return to compensate for this risk. 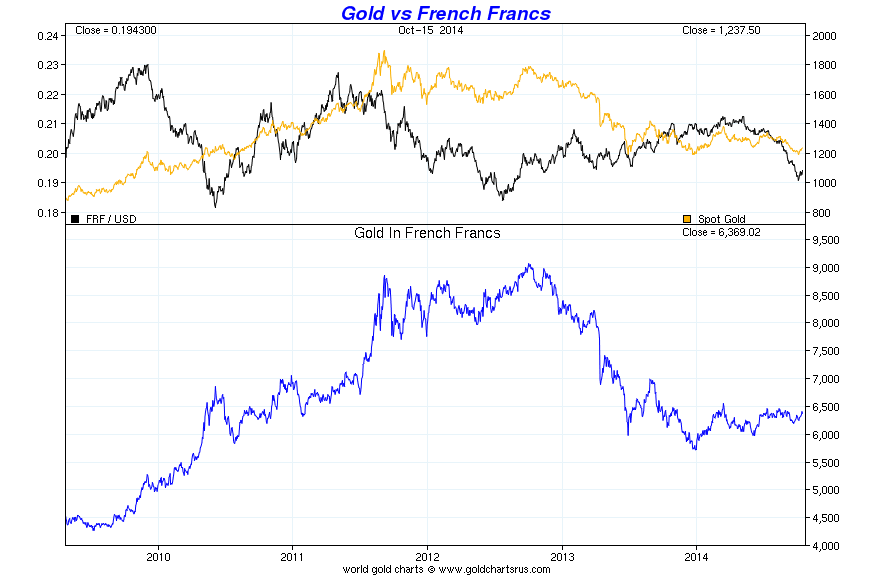 At that time, talk of the creation of a Eurobond was rife but the Germans held fast. It was looking as though these struggling countries would be forced to leave the euro until, at the eleventh hour, ECB governor Draghi stepped in, in July 2012, and announced that the ECB “is ready to do whatever it takes to preserve the euro.”

This was interpreted to mean, among other things, that the ECB would buy bonds of struggling countries if necessary. Without Draghi having to actually do anything, risk was regarded as having been removed, at least temporarily, from the system and there has been a relative calm and confidence in the viability of the single currency since then.

But crisis seems to be surfacing again as seen in the sharp increase in volatility and decline in stock markets and certain bond markets in recent days and again today.

For many Italians, the slow grind of depression has tested their patience beyond endurance. Youth unemployment is at an incredible 46% and industrial production has fallen 25%. Many note that, since joining the euro, Italy – once an industrial powerhouse of Europe – has been unable to compete with Germany due to an overvalued currency.

In Greece the effects of Draghi’s pronouncements appear to have run their course and now actions may be required. The stock market has retraced around 50% of its gains since the “Draghi put.” It is down a sharp 23.65% this year alone.

The fact that it is impossible for Greece to regain competitiveness and recover from depression while clinging to the euro is becoming increasingly evident. Prominent economists such as Nouriel Roubini, as well as investor George Soros have said as much and influential voices in Greece are now questioning the wisdom of clinging to the euro.

Even uber Keynesians and money printing advocates such as Paul Krugman have previously warned of the euro breaking up and Italy returning to the Italian lira and France returning the French franc. 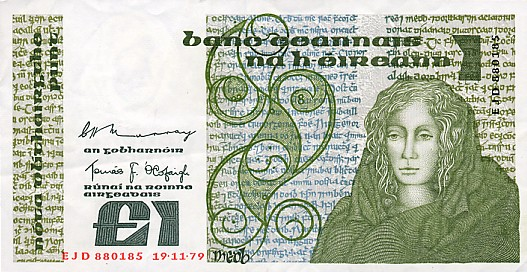 In Ireland, dissatisfaction is not being expressed through euro skepticism. However, there is certainly a sense that enough austerity is enough.

Up to 100,000 people took to the streets the weekend before last, to protest the introduction of water meters and privatisation of the water supply. This was a very large turnout by Irish standards and may be the start of the Irish public awakening from their recent apathetic slumber. 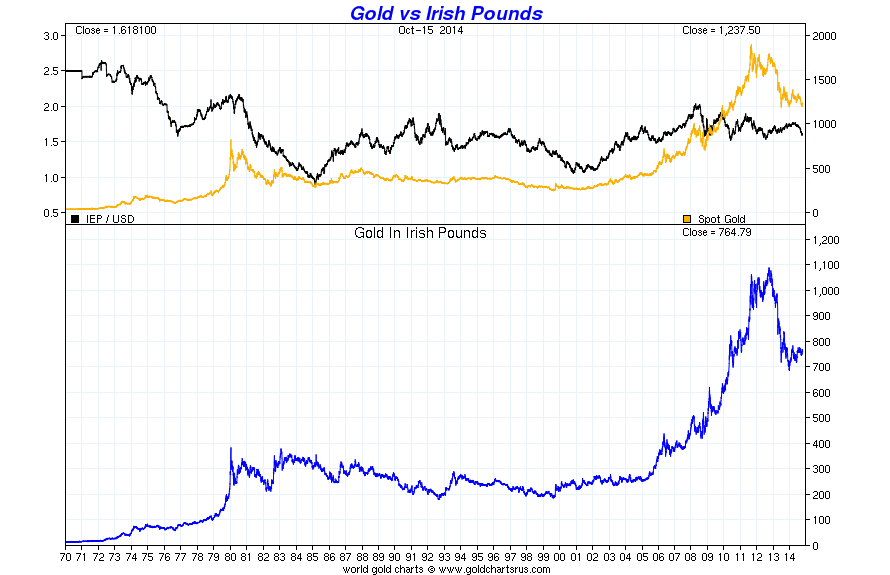 Criticism of the EU and ECB remains muted in Ireland. Although, the recent revelations by former central bank head, Patrick Honohan, regarding the manner in which the losses of reckless European banks were foisted onto the Irish taxpayer, is making even the most hardened euro phile somewhat skeptical. Not skeptical of the EU per se but of a policy of blindly accepting unfair and damaging policies foisted on Ireland.

In Spain and Portugal none of the structural problems that led to the crisis have been solved. And with data from Germany suggesting it is entering recession it may be only a matter of time before the eurozone is in crisis mode once again.

In this environment, the ECB is in a much more difficult, some would say impossible position, as the panacea of ultra low interest rates can no longer be administered.

In the fifteen years since the introduction of the euro, we have had six years of austerity and monetary hardship. If Europeans are faced with more of the same it is likely that disillusionment with the euro project will be inflamed.

It is hard to envisage an orderly breakup of the EMU. Like Cortez – who burned all but one of his ships before marching inland to take on the Aztec empire – turning back was not factored into the architecture of the monetary union. 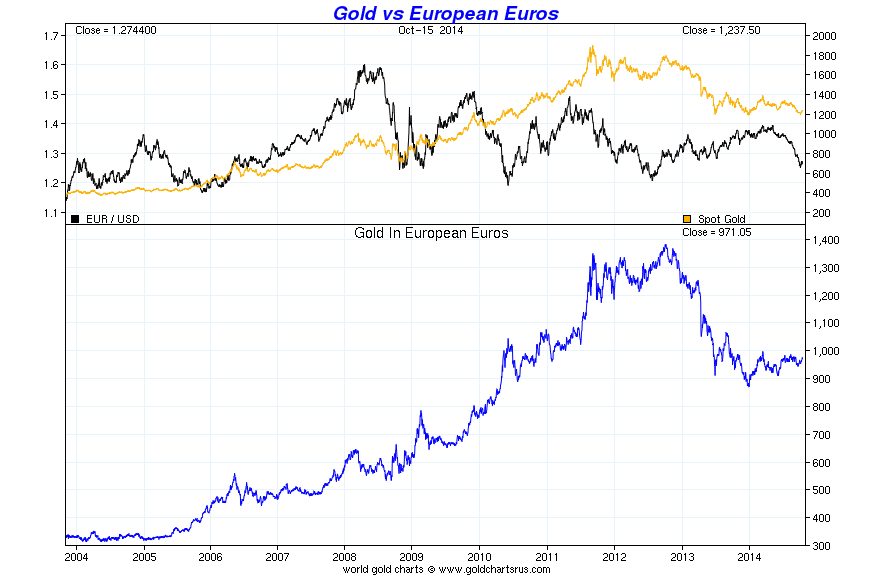 There are now three real scenarios that could play out in the coming months.

First, is that the German people, politicians and Bundesbank manage to prevent the ECB from embarking on the ‘bazooka’ of Euro QE. Given huge deflationary pressures, this would likely lead to deflation and an economic depression in Europe and globally.

The second scenario is that Draghi and the ECB manage to overcome German opposition to euro QE or euro debt monetisation and printing. This would lead to the euro being debased and devalued and falling in value versus major currencies and especially gold.

The third scenario is that Italy or Greece opt to leave the monetary union and revert to their national currency. Their new liras and drachmas see sharp devaluations.

Gold has no counterparty risk and cannot go default or go bankrupt , unlike companies and governments.

Conclusion
What should investors and savers in European countries do to protect themselves from the risk of currency debasement and devaluations?

The answer remains obvious and can be seen in the charts above. Gold is an important hedging instrument and financial insurance that will protect people from the potential return to liras, drachmas, escudos, pesetas and punts.

These are the types of scenarios where gold comes into it’s own as financial insurance and a store of value.

Get Breaking News and Updates On Gold and Markets Here