NASA Weather Mapping is confirmation of two forms of Geoengineering in the U.S.

You have probably already seen the recent weather map that is circulating in the press, provided by NASA. The map that shows the US divided in two regions, a colder than average and a warmer than average, East Coast and West Coast. But most people haven’t got an honest explanation yet, at least not from that same elitist press.

As the propaganda machines have been fueled up and are starting to roll out the same old “man-made-it’s-CO2-global-warming” garbage, to explain away the odd weather pattern over the US, by organizing talk shows and special news broadcasts with all dressed up and perms-in-their-hair ‘experts’ and ‘scientists’ who can hardly spell their own names, I have already found out the exact reasons for the split US weather map and I will share it with you with pleasure.

The following is also dedicated to all the “Metabunkers”, “Snopesers” and the Google Truth Vault.

So this is the map that is circulating and that is prompting UN minions to call man-made CO2 global warming alarmism, without even knowing what they are staring at. I hope Al Gore’s windbags, who are still trying to figure out how to respond to the fact that their master has PFTBA in his NASA fuel cells, are also paying attention to this one. 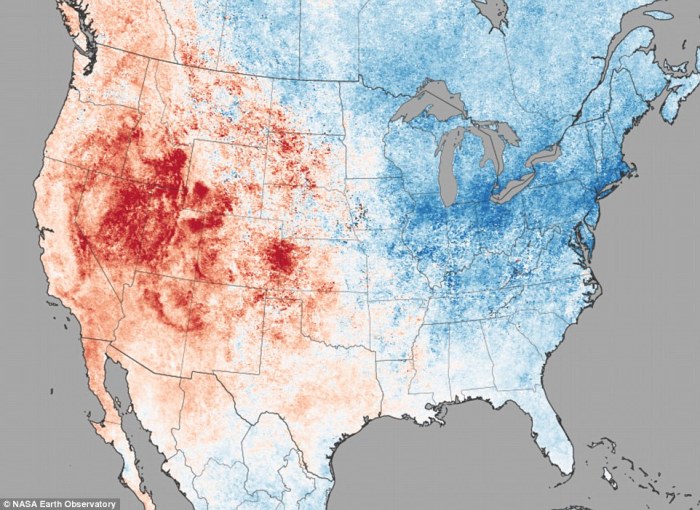 Well, the following is a map of nexrad/doppler radars that are stationed in the exact area where the temperature is lower than average, in Eastern US: 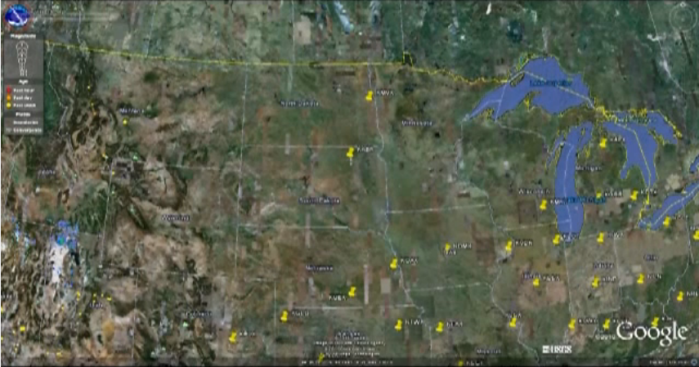 As you can witness in the following 2 maps, these radars, when active more than they should be (way more than 7 seconds per hour and in such events at a constant 750,000 watts) actually cause cloud formations to form exactly over the region where they are stationed: 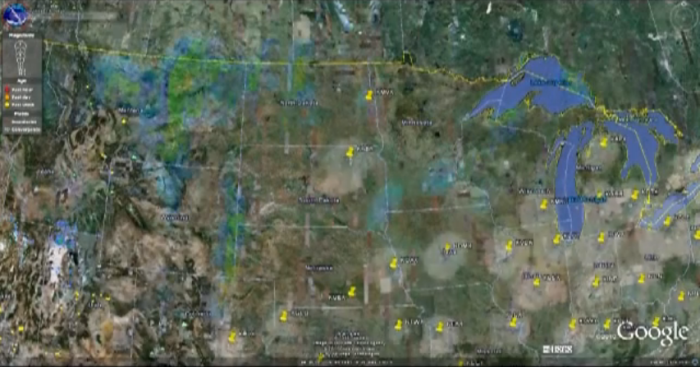 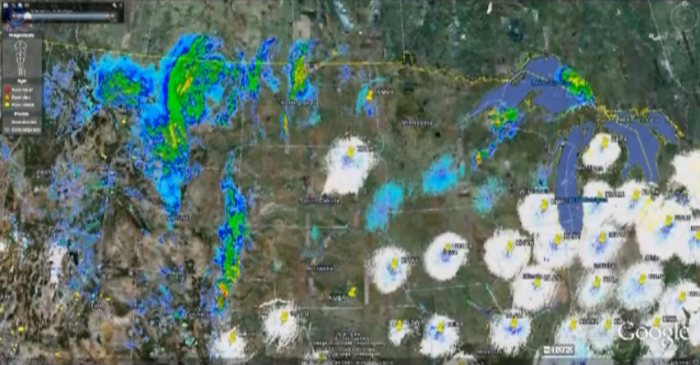 As a result, these radars literally create weather systems in the Eastern part of the US, in the exact same area where NASA shows that surface temperatures are lower than average. It’s a PERFECT MATCH! There’s no denying this at all.

Now for the Western US area we are dealing with another form of climate/weather engineering technology, lets call it haarp-like manipulation to use a famous catchphrase.

There is a provable explanation for the higher than average temperatures and the drier than average climate in the West. For this we simply have to take the 2013 maps from the Weather Channel on which we can clearly see that weather systems and cloud formations are being blocked before they can even enter over the West Coast’s mainland. These are obvious signs of haarp-like manipulation at the West Coast of the US (this is also further explained here, it is important to read that San Joaquin valley report in order to understand some of the reasons why this is occurring there). 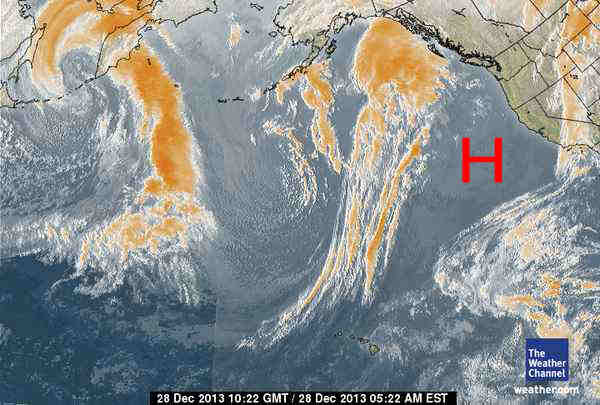 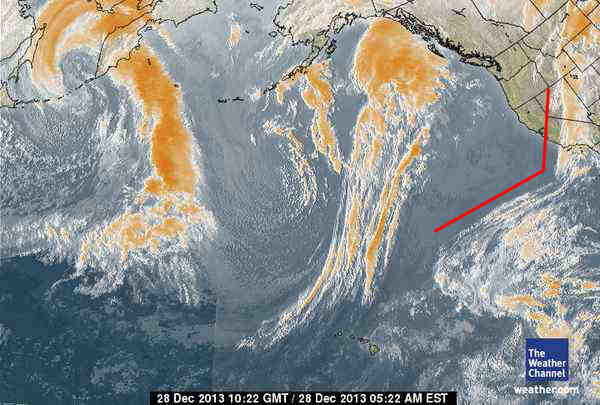 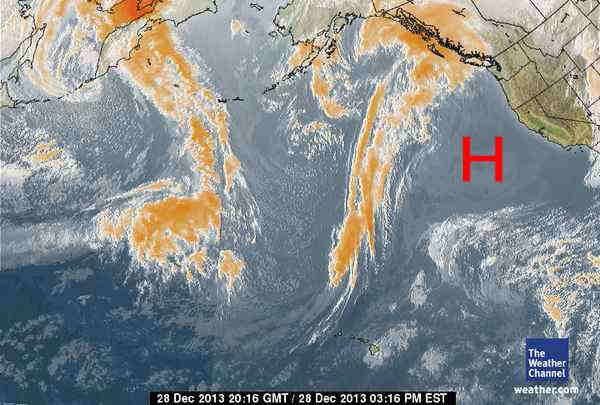 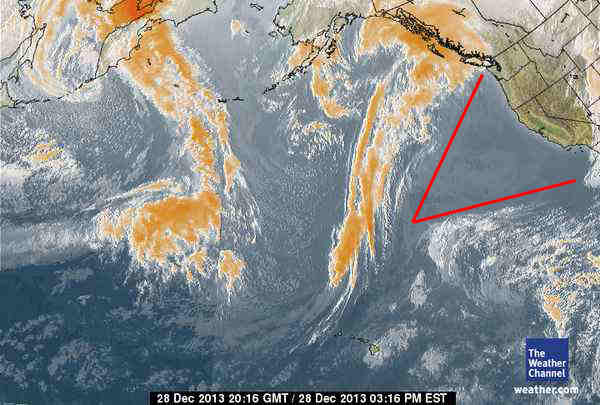 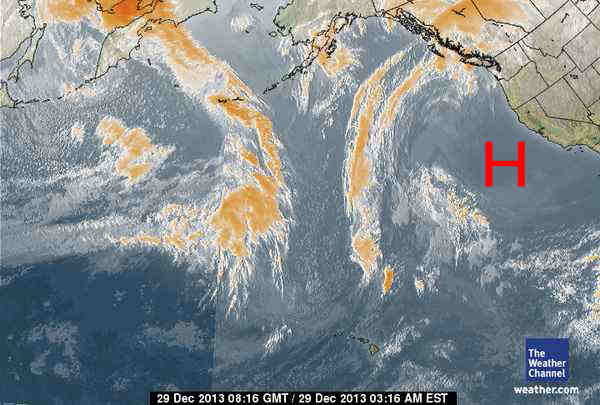 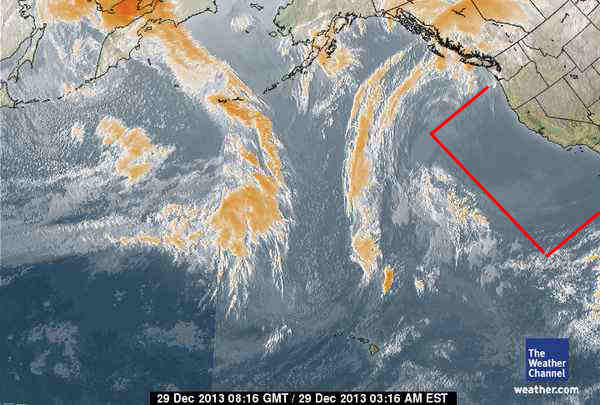 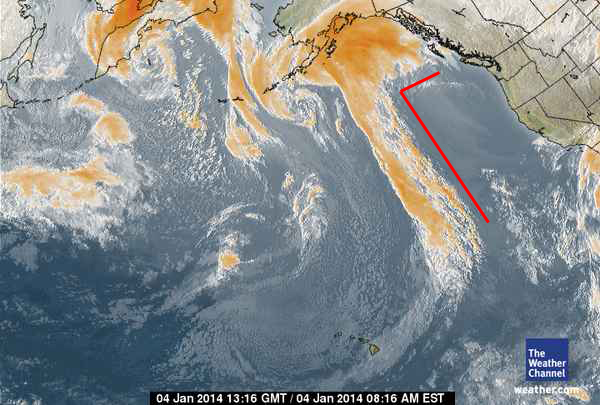 There’s no debunking this in any way. It is constantly in the same area before the shores of the West Coast that the weather systems are being blocked from entering the US mainland and also the haarp-like signatures in the cloud systems indicate that beyond any doubt. Weather systems that normally would allow for cooler surface temperatures and rain clouds. In addition to this haarp-like manipulation near the West Coast I am quite convinced that other such methods are being deployed over the mainland in Western US, no doubt about it!

It is this kind of explanation that the people need, in order to understand what they are seeing on the NASA map for February 2015, as it is being distributed in the establishment press.

Of course not a single mainstream ‘genius’ will tell you this, they’d lose their elitist paycheck over it. Instead they’ll feed the population with UN propaganda, that mankind is pumping too much CO2 in the air. The above maps clearly prove to you that CO2 has NOTHING to do with what is happening to the climate. It’s all unnatural, deliberate manipulation. Have Greenpeace, the WWF, the United Nations and the EU, who all cover up the truth about Fukushima’s 3/11, explain this to you. I’d love to see them try it!

It is highly likely that many people will not be able to read that report online since it is already being censored to death merely 24 hours after I first published it, I have proof of that and I will document that after this:

Now, as I mentioned I have crystal clear evidence that my website and my man-made-co2-scam busting report are being censored by those who know damn well what I have documented in that report and they realize very well what it means when the world finds out about it too. It would literally be GAME OVER for the UN’s epic fraud that man-made-co2 global warming is. To hell with that green religion and all those who dare to defend it with their lives and reputations. You’re all BUSTED BIG TIME!

That belongs to no one less than NASA’s Jet Propulsion Laboratory in La Cañada Flintridge, California, United States.

Ask yourself. Why would they block this damning report for their employees at NASA JPL? It’s obvious why, isn’t it?!

In addition I also have the Alabama Power Company blocking the same report and my website: 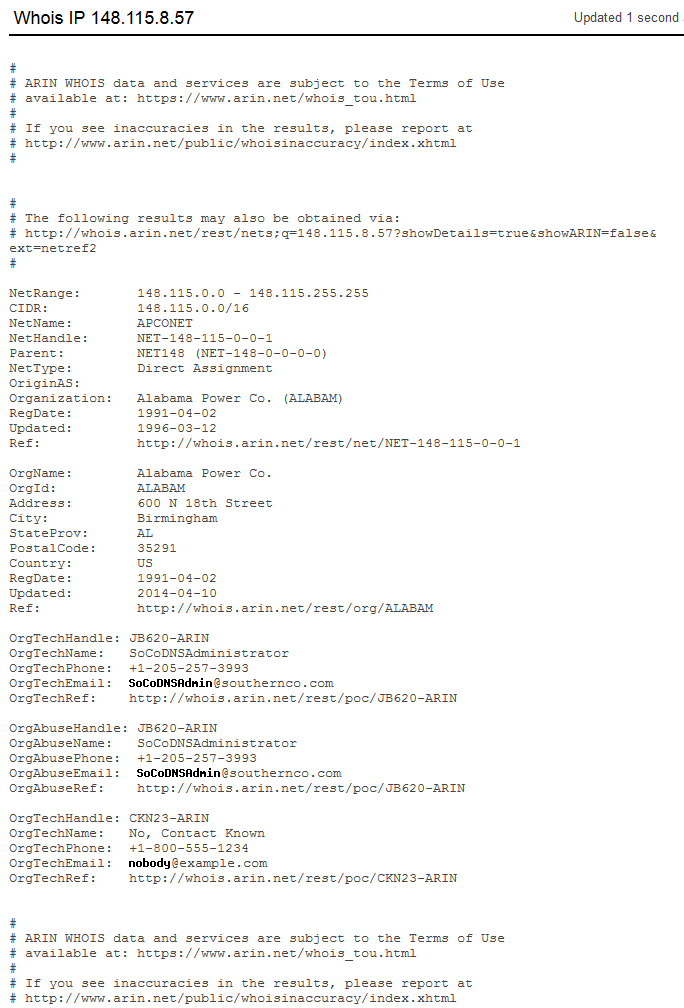 Why would the Alabama Power Co. block my report? Are they providing the power for installations that are causing haarp-like manipulations of the US weather? Good question!!

I nailed them both with this!

Spread this update too please.