Midwestern farmers have so much grain this harvesting season that there aren’t enough railcars to ship it all. Its been a bumper crop year for grain growers, yet U.S. Secretary of Agriculture Tom Vilsack attributes the low prices of grain to farmers selling their grain locally for fear of letting it sit and spoil – completely ignoring the fact that countries like China have refused over 887,000 tons of US GM corn and other GM crops.

What difference does a bumper crop make if you can’t sell it- whether due to transportation restraints or the refusal of foreign markets to import your crop? But more importantly, what does this say about the continued arguments of biotech that ‘we don’t have enough food’?

There is literally a traffic jam on railcars coming out of the Midwestern states, with Missouri, Indiana, Illinois and South Dakota being hit especially hard – all due to an overflow of grain harvest.

Normally, when farmers sell, they truck their corn and soybeans to their local grain elevator, and from there it meets big food sellers to be shipped locally or around the world. With the combination of GM food refusal and the sheer lack of trains, many farmers are trying to figure out what to do with their spoils.

John Miller of BNSF Railway said the burgeoning oil and coal sectors in the upper Midwest are compounding the problem, even though they use different types of rail cars. 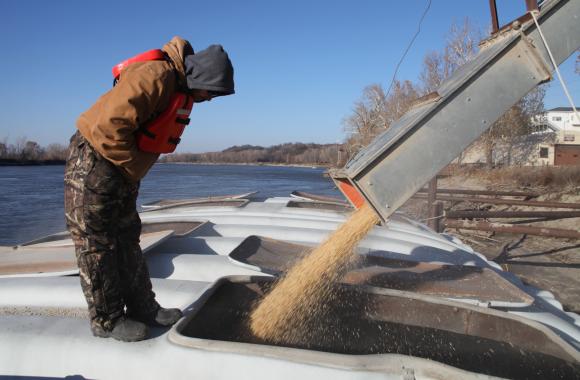 An MFA Agriservices worker monitors the soybean chute as the barge fills up on the Missouri River in Glasgow, Mo. (Kristofor Husted/Harvest Public Media)

Even river barges are being put into service to relocate grain to appropriate markets.

Another issue this brings up is the Big Ag food model’s of food transportation. Wouldn’t small-scale organic gardening be a much better way to grow food for a nation? It certainly wouldn’t require a $1 billion investment just for the transport of food. Often, when food finally reaches its destination, much of the life-force and nutrition has been lost since food is best eaten days within harvest. 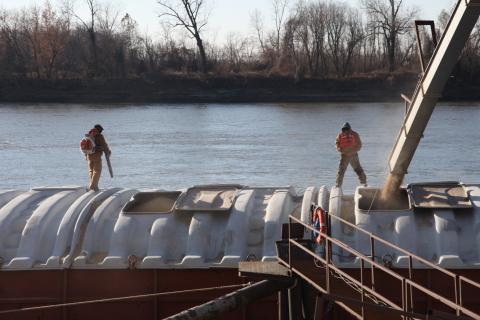 MFA Agriservices loads a barge on the Missouri River with soybeans for the first time in more than a decade. (Kristofor Husted/Harvest Public Media)
According to Food-Hub:

“Food miles—and the resulting pollution—increase substantially when we consider produce and goods imported from halfway around the world. In developed nations like ours, food is traveling farther to reach consumers and international food trade is increasing more rapidly than increases in population or food production, [and in recent cases, we see a decrease in food exportation.]

Between 1968 and 1998, world food production increased by 84 percent and the population by 91 percent, but food trade increased 184 percent.”

This is also another example of the mono-cropping model problem. Who needs an overabundance of grain that can’t be stored – would it not be better to have a variety of crops that can feed families?

One thing is for certain – there is no food shortage. Our food system just needs to be re-thought, without accepting Big Ag practices as the holy grail of food production.