Fentanyl So Dangerous US Police Fear Touching or Inhaling It

Fentanyl So Dangerous US Police Fear Touching or Inhaling It

The highly addictive and lethal drug fentanyl is considered so dangerous, police in the US are scared to inhale and even touch it. Drug experts call for better safeguarding and treatment for users.

Many officers and first responders in North America have started to carry the overdose antidote called, naloxone, which helps to save dying opioid users. Fentanyl is fifty times more powerful and potent than heroin and as well as being used extensively in the US, it is also used widely in the EU. 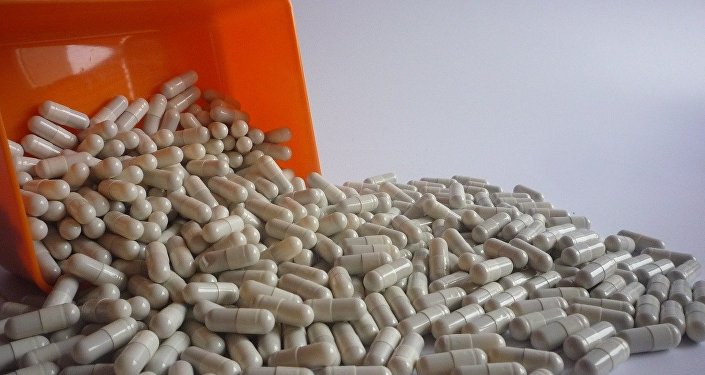 Fentanyl is a synthetic opiate, developed in the 1960s and widely used medically for pain control and general anesthesia. It’s very short-acting, active only for a few minutes which is useful in a medical context, but also very potent. There are related drugs, such as remifentanyl which are more potent still.

​It is highly addictive and millions of people across the world have suffered after using it. In the US, 20,000 people died in 2014 due to overdosing on the drug. In the EU, opioid addiction is also on the rise, leading to high numbers of fentanyl related deaths as well.

Sputnik spoke to leading drug expert, Steve Rolles, who is senior policy analysts at Transform. Mr. Rolles sees, on a frequent basis, the impact this drug is having on people’s lives.

“Its potency makes illicit use particularly risky, even a small miscalculation with dosage can be fatal. It can however, be used safely in a medical context. Many people use fentanyl skin patches for example. These are safe when used as directed, but not when the fentanyl is extracted and injected as has become a common practice,” Mr. Rolles told Sputnik.

Today, we are asking the feds to bring in harsher sentences for those moving fentanyl into our communities #ableg https://t.co/nvCwa7aUTq

“In terms of touching or inhaling, the risk for police is very small, and there’s a risk of pandering to media panics. On the other hand they [the police] have to prioritize their safety. Gloves and face-masks for example, are common for dealing with dangerous substances, drug labs and so on.”

However the fact remains, this drug is a risk and solutions must be put in place to safeguard vulnerable people, according to Mr. Rolles. Opiate users substitute between different opiate drugs depending on what is cheap and available. There has been a switch in the US from diverted prescription opiates to heroin since the prescription regimes were tightened up. A key safety issue with street heroin is its variable potency and how that increases an overdose risk.

“This has become a more acute crisis since fentanyl became an increasingly common adulterant in heroin. Again, its potency means that miscalculating dosage and overdosing becomes far more likely. The reason it has become more prevalent is simply a matter of economics — diverted or illicit fentanyl is cheaper and more accessible to illicit dealers than imported heroin,” Mr. Rolles told Sputnik.

“What is needed is to provide the right treatment for the people who need it and for people who aren’t willing or able to stop — sensible harm reduction to keep them safe. That means substitute prescribing with methadone and buprenorphine, exploring ideas for supervised consumption venues, easy access to naloxone — the opiate overdose that can prevent overdose deaths. A model for prescribing pharmaceutical heroin has also proved very effective in Switzerland and elsewhere around the world, but the US has never explored it because of domestic legal barriers, heroin is not allowed as a medicine unlike in many countries.”

The issue of responsibility always comes up when drugs are concerned and questions are asked as to who is to blame in the rise in addiction cases.

“The blame has to rest with the war on drugs and its champions. Prohibition has tended to push the markets towards more potent, risky, but profitable drugs and preparations. That is why you can buy crack, methamphetamine and fentanyl on US streets, but not the much safer smokable opium or plant based stimulants like coca leaf or ephedra. Tough enforcement doesn’t get rid of problems of super potent drugs like fentanyl, it makes them more likely,” Mr. Rolles told Sputnik.

“In the short term appropriate treatment and harm reduction is essential. Part of that shift is creating a space for supervised consumption venues, heroin assisted treatment and naloxone provision. Another key element is ending the criminalization of users and small scale possession.

“The long term solution needs to consider finding a legal supply of lower risk opiates that can meet demand more safely, and bring problem users into contact with health professionals. This could be either on prescription, or via some sort of licensed venues, perhaps like the opium dens of the past. People may not like the idea, but at some point we have to face a pragmatic reality,” Mr. Rolles added.