Fontus Water Bottle for Bikes that Generates water From the Air

This Water Bottle for Bikes Generates H2O From the Air

Under hot and humid conditions, “Fontus” claims to “make” 17 ounces of water in an hour.

Imagine taking a brutal cross-state bicycle ride without once stopping to top off your water supply. That thirsty-sounding trek could become a comfortable reality one day thanks to Kristof Retezár, an Austrian designer behind an incredible, self-filling water bottle.

Retezár’s “Fontus” system, which is competing for a James Dyson Award, is a sleek, two-piece contraption that attaches to a bike’s frame. When a cycle is in motion, air is funneled into the top holster and distributed over a “condensing structure.” A solar-powered cooling element then turns it into moisture that drips down a pipe into a detachable water bottle. (Any kind of half-liter PET bottle will work.)

Under hot and humid conditions, “Fontus” can allegedly produce about 17 ounces of agua, just about enough to sustain a sweaty cyclist. But Retezár sees broader uses for his machine, wanting to put it to use in regions where fresh water is scarce. Those places are shown inside the circles on this map, which also shows in darker red where meteorological conditions make the device most efficient: 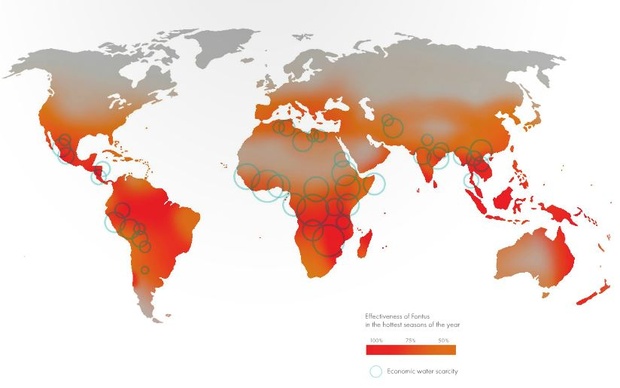 Here’s the designer explaining his two-pronged plan for “Fontus”:

Fontus can be applied in two different areas. Firstly, it may be interpreted as a sporty bicycle accessory. Useful on long bike tours, the constant search for freshwater sources such as rivers and gas stations can cease to be an issue since the bottle automatically fills itself up. Secondly, it might be a clever way of acquiring freshwater in regions of the world where groundwater is scarce but humidity is high. Experiments suggest that the bottle could harvest around 0.5 L water in one hour’s time in regions with high temperature and humidity values. 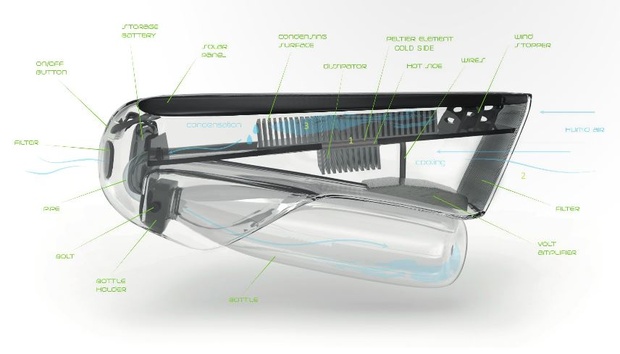