For black Americans with diabetes, tooth loss is a major problem

For black Americans with diabetes, tooth loss is a major problem

Black people with diabetes in the US have a higher risk of tooth loss compared with white and Mexican Americans with the same condition, according to a CDC report published today. This is bad news, since oral health can be used as a way of tracking overall health. It suggests black Americans aren’t getting the care they need.

For people who get to see a dentist on a regular basis, tooth loss may not seem like a big deal. But there’s an important relationship between oral health and certain chronic health conditions; studies have shown links between bad oral health and cognitive decline, cardiovascular disease, and respiratory diseases. Black Americans have the largest death rates from heart disease and stroke, and are almost twice as likely to have diabetes compared with white Americans — so improving their oral health could help with their overall health.

What’s more, dental pain can affect people’s ability to perform well at their jobs. Cavities, gum disease, and eventually tooth loss may then have consequences for job security as well, then, by affecting people’s ability to work. This leaves them further disadvantaged. That’s why researchers are so concerned with the state of American teeth. 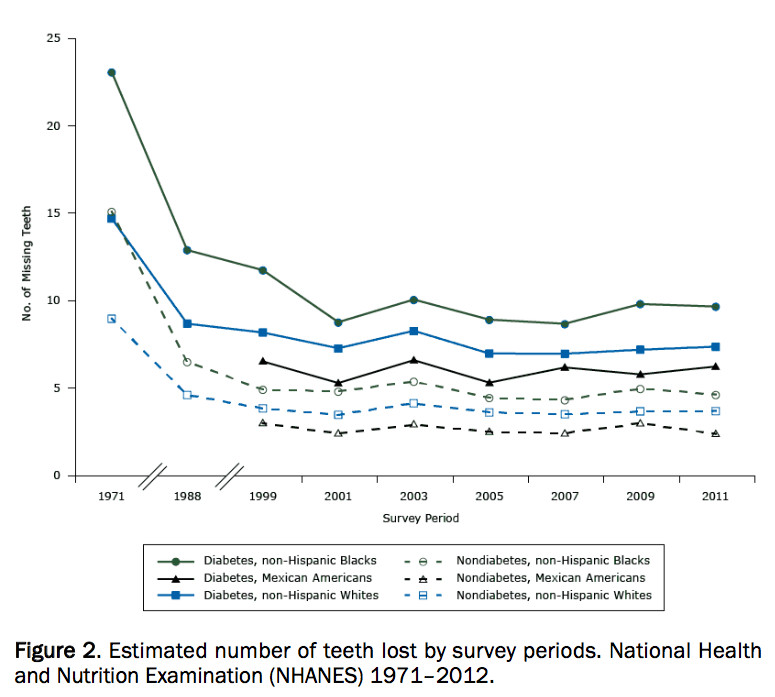 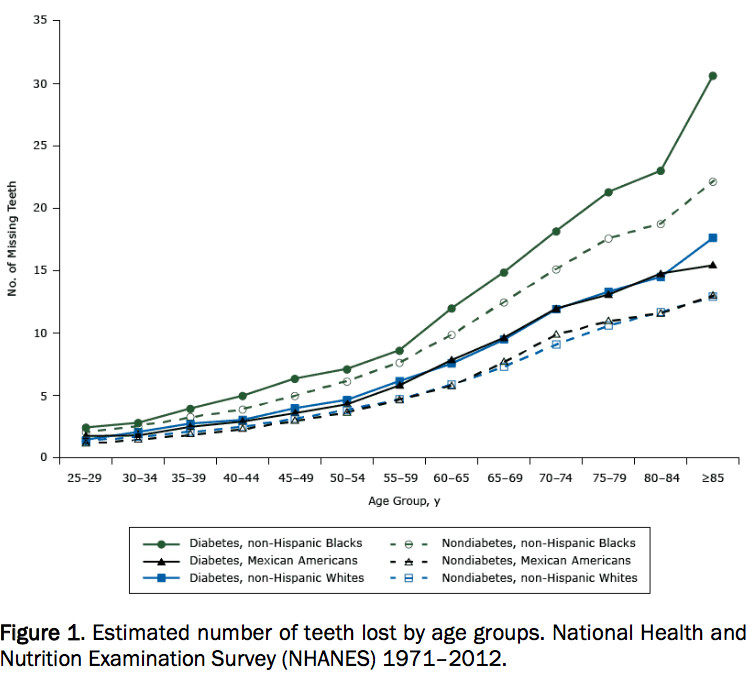 This isn’t the first time that the CDC has identified a racial gap in the oral health of Americans. Earlier this year, a report showed that black children are twice as likely to have untreated dental cavities compared with non-Hispanic white children. And that trend exists even though Hispanic, white, black, and Asian teens are just as likely to develop a cavity in their teenage years.

BLACK CHILDREN ARE TWICE AS LIKELY TO HAVE UNTREATED DENTAL CAVITIES

Because the study didn’t look specifically at potential causes for these differences, it’s hard to know for sure what’s going on. But it’s possible that gaps in a dental care played a role. Historically, black people in the US have had a hard time accessing dental care and knowledge about dental care, says Bei Wu, a nursing professor at Duke University and a co-author of the study. “For African Americans, the lack of access to care is profound,” she says. Because most health insurance plans in the US don’t cover dental procedures, families have to buy dental insurance separately. As a result, lower-income families — which are mostly of color — may decide that medical care takes precedent over dental care, Wu says.

That can’t be the whole explanation, though, since Wu and her team found that Mexican Americans have a lower rate of tooth loss than white Americans; it’s possible that other factors, like racial prejudice, play a role in keeping black Americans from getting the care they deserve.