Entire Wind River Basin may be polluted with fracking wastewater

Let’s think for a moment. If terrorists dumped biological agents in a river that provides drinking water for thousands of people, it would spark panic, probably result in new laws, and the world would be horrified. If a disgruntled woman somehow managed to dump poison in her ex-husbands well water, it would be a criminal act. Outrage would explode over social media.

But don’t believe it.

Fracking contaminates groundwater, and a new study proves it.

The lead author of the study is Dominic DiGiulio, a former Environmental Protection Agency (EPA) scientist. DiGiulio used public records and new water samples taken from an aquifer near the small town of Pavilion, Wyoming, to build on an EPA study abandoned in 2013.

The EPA launched the investigation in September 2008 after Pavilion residents reached out to the agency to complain that their drinking water smelled and tasted foul. The EPA sampled domestic wells in March 2009 and January 2010, and issued a preliminary report in 2011. According to the report, chemicals used in fracking had leaked from unlined dumping pits into Pavilion’s groundwater.

The EPA never finalized its findings and, predictably, the drilling industry contested the report. The agency turned the investigation over to the state of Wyoming, resulting in just more inconclusive reports.

Fracking, which is short for hydraulic fracturing, involves injecting a mixture of water, sand, and chemicals at a high pressure into shale rock formations to release the oil and nature gas inside. Scientists and activists have called for a ban on the practice – at the very least, tighter regulations – because fracking causes earthquakes. Nowhere is this a bigger problem than in Oklahoma, where fracking has made the state the national capitol of earthquakes, surpassing California. [1]

The EPA tends to downplay the seriousness of the damage caused by fracking, and agencies have blinders on when it comes to local pollution and the health problems caused by the practice, according to Rob Jackson, an earth scientist at Stanford and co-author of the study.

For example, in 2015, the EPA said in a controversial draft study that fracking has not had “widespread, systemic impacts on drinking water resources in the United States.”

“The national office of EPA has tended to downplay concerns of their own investigators, in part because the Obama administration has promoted natural gas. Natural gas is here to stay. It behooves us to make it as safe and environmentally friendly as possible.”

Well, DiGuilio wrapped up the study that the EPA handed over to the state of Wyoming in 2013, and it’s now published in the highly regarded, peer-reviewed journal, Environmental Science and Technology, for all the world to see. 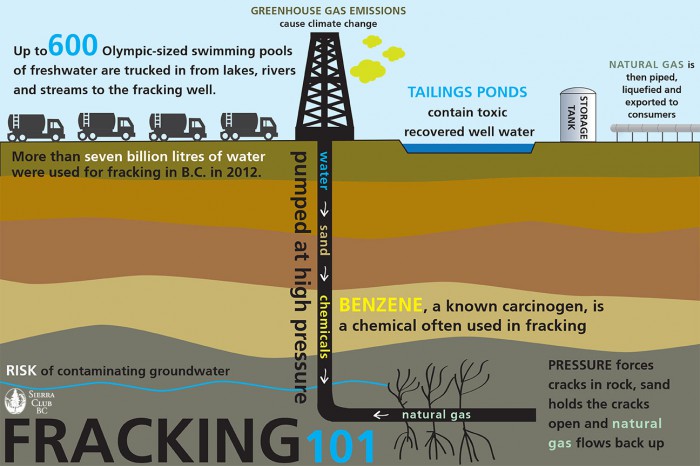 The study finds that the town of Pavilion is a tiny chunk of a much bigger problem; DiGuilio says the findings suggest the entire groundwater resource in the Wind River Basin is contaminated with chemicals linked to fracking.

“We showed that groundwater contamination occurred as a result of hydraulic fracturing.”

According to EPA spokeswoman Julia Valentine, the agency hasn’t concluded its assessment that natural gas has no “widespread, systemic impacts.” She said the agency will evaluate all recent research, including DiGiulio’s.

Magically, testing by Encana Corp., the company that operated in the Pavillion basin, turned up opposite results. Doug Hock, an Encana spokesman, told Scientific American:

“After numerous rounds of testing by both the state of Wyoming and EPA, there is no evidence that the water quality in domestic wells in the Pavillion Field has changed as a result of oil and gas operations; no oil and gas constituents were found to exceed drinking water standards in any samples taken.”

“Conducting a groundwater investigation related to fracking is extremely complicated. It is difficult because a lot of the compounds used for hydraulic fracturing are not commonly analyzed for in commercial labs.

You have some of these very water-soluble exotic compounds in hydraulic fracturing, which were not amenable to routine lab-type analysis.”

He told Inside Climate News:

“When you look at everything as a whole, it seems implausible that all this is due to natural conditions. When you look at the compounds, it’s a virtual fingerprint of chemicals used in the field.

Decades of activities at Pavillion have put people at risk. These are not best practices for most drillers.”