Game of Thrones: The Clintons, Bushes Don’t Want Trump to Come Out on Top

Game of Thrones: The Clintons, Bushes Don’t Want Trump to Come Out on Top

The Bushes and the Clintons, the two “political dynasties” expect that Hillary Clinton will maintain the established status quo, if elected, and do not want Republican presidential nominee Donald Trump to occupy the Oval Office, US-based journalist and editor-in-chief of News Junkie Post Gilbert Mercier told Sputnik.

The US’ 2016 presidential election resembles nothing so much as a reality show, Gilbert Mercier, a US-based French journalist, author and editor-in-chief of News Junkie Post, deems.

However, to understand the underlying “forces” that drive today’s election one should look back into the US’ history.

“Just like in the mafia crime families whose influence reached its apex between the 1920s and the late 1950s, to fade away in the late 1970s, the US rival political families are in many ways organized in clans with their own structure of don, capo, consigliere and hatchet men. The Rockefellers and Kennedys operated like this. Since the election of Reagan, the two dominating clans have been the Bushes and the Clintons,” Mercier suggested in his interview with Sputnik.

©
REUTERS/ Brian Snyder
Political Dynasties: Why Hillary Likely to Become Next US President No Matter What

In his book “The Orwellian Empire” Mercier noted that the rise of George H.W. Bush — the founder of the Bush political dynasty — started in 1980 when he officially became Vice President to Ronald Reagan, the 40th President of the United States from 1981 to 1989.

Previously, Bush served as director of the Central Intelligence Agency between 1976 and 1977.

“The Clinton dynasty came along in 1992,” the author wrote.

After inking the North American Free Trade Agreement (NAFTA) and reversing the Glass-Steagall Act, which separated commercial banking from investment banking, Bill Clinton “became a favorite of Wall Street’s investment banks, such as Goldman Sachs,” he pointed out.

Interestingly enough, in his recent interview with Sputnik Canada-based political analyst Oussama El-Mohtar suggested that there appear to be a number of “policy centers” in Washington. The clashes of interests between them, according to the scholar, could have been behind the US’ inconsistent policy in Syria and the collapse of the US-Russian agreement.

“That might have been the case, but the notion of ‘centers of power’ is getting more and more diffuse. It started with the election of Ronald Reagan in 1980 and has become increasingly monolithic,” Mercier noted, commenting on the issue.

“In the early 1990s, their [the Bushes and the Clintons’] interests sometimes still clashed, but very quickly, as Bill Clinton became in Bush Sr.’s eyes ‘almost a son,’ their interests started to coincide almost always in an implicit agreement  to pass the baton of power from one clan to another every four or eight years,” the journalist assumed.

Mercier argues that the year 1980 was the beginning of the end of the US as a republic with a two-party system.

“It is when the US became a full-fledged empire with two mafia-type dynasties taking turns in power,” he suggested.

“John Kerry was part of the Kennedy clan, and for this reason a bit of an outsider. Informed observers hoped that he would offer an alternative and challenge Hillary Clinton during the primary. He had the intelligence, the poise and the credentials to do so; however, he made the choice to join the Clinton clan instead,” Mercier told Sputnik.

Therefore, it is hardly surprising that George H.W. Bush, his daughter-in-law Laura Bush and his granddaughter Lauren Bush Lauren, signaled that they will most likely vote for Democratic presidential nominee Hillary Clinton.

“Former President George H.W. Bush said Monday that he will vote for Hillary Clinton in November, according to sources close to the 41st President — an extraordinary rebuke of his own party’s nominee,” CNN reported on September 21. 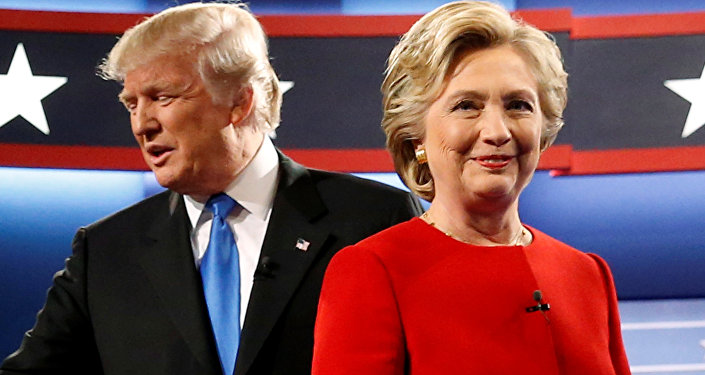 ©
REUTERS/ Jonathan Ernst
In Contrast to Clinton, Trump Has No Appetite for War With Russia

It looks as if the two powerful political clans do not want an “outsider” to come out on top.

“The two leading political clans are not in conflict at all. In their power sharing agreement everybody gets a very nice share of the pie,” Mercier explained, “It has worked well for the Bushes under Clintonite Obama, and of course ‘Empress Hillary’ would maintain the status quo.”

“This form of government is corrupt to its core, and this is why somebody like Trump appeals to anti-establishment voters. People are fed up. They do not precisely know what they want, but they are certain that the system is rigged and are ready to reject it,” the journalist stressed.

Gilbert Mercier is the author of The Orwellian Empire and the editor in chief of News Junkie Post.

The views expressed in this article are solely those of the author and do not necessarily reflect the official position of Sputnik.