Matter-a-fact, the South African Mint has produced over 50 million oz of Gold Krugerrands over the past 49 years. It is the largest Official Gold coin producer in the world. The U.S. Mint’s Gold Eagle comes in second with over 22 million oz produced since the program started in 1987.

However, the big deal for the silver investor will be the new 1 oz Silver Krugerrand: 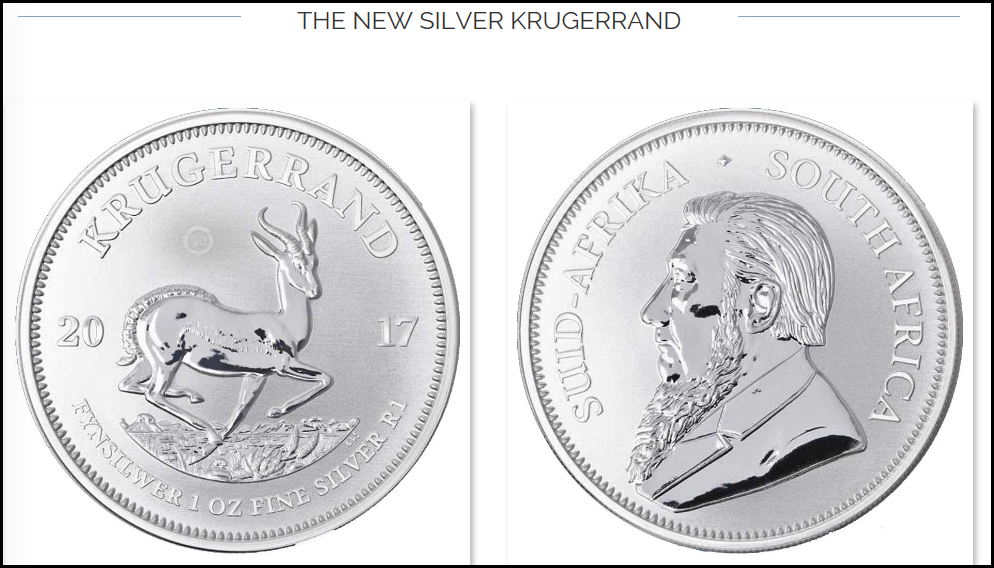 The South African Mint plans on releasing 500,000 of the 1 oz 2017 Silver Krugerrand next year, along with 15,000 proofs. I imagine they plan to see how successful the initial coin sales of the Silver Krugerrand will be before they revise their annual mintage figures.

I always wondered why the word, “Krugerrand” came from. According to the first article that broke the news about the release of the Silver Krugerrand from AgAuNews.com, that stated the following:

First thing to note with the silver coin is that it carries an actual denomination, 1 Rand, the gold never having done so. Apart from the inscriptions in the bottom half of the reverse face, the design remains unchanged from the original. For this 2017 coin, we’re going to assume that these will continue onwards unless they’re an unlikely poor seller, there is also a small privy stamp of the number 50 in a circle, the meaning obvious.

I actually plan on purchasing some of these Silver Krugerrands. I think they are going to be a bit hit as investors will quickly acquire all 500,000 of the coins issued for the first year.

IMPORTANT NOTE: I will be publishing an article on ExxonMobil within the next few days. I highly recommend checking out the article because it provides startling evidence just how dire the U.S. Oil Industry has become.

Check back for new articles and updates at the SRSrocco Report.