ICANN reveals plan for ending America’s control of the internet

ICANN reveals plan for ending America’s control of the internet

Though it’s called the “world wide web,” the US Commerce Department has held the keys to the internet since its inception in the ’90s. Last year, it agreed to hand them over to worldwide bodies and asked ICANN, the group that manages internet addresses, to come up with a plan. ICANN unveiled the much anticipated report yesterday, and has given the public until September 8th to comment on it. The gist of the 100-page document? Internet control functions will be given to ICANN and an oversight body made up of “interested parties” that has no connection to any world governments.

Many American political heavyweights were opposed to ceding US control, fearing internet censorship in certain nations. Ex-President Bill Clinton, for instance, said it could lead to states “protect(ing) their backsides instead of empowering people.” Republicans also signaled early on that they were opposed to any change in the status quo. However, ICANN’s proposed rules would keep nations from meddling in any internet decisions. Instead, oversight will be handled by a “Customer Standing Committee” (CSC) made up of numerous stakeholders in industry, academia, government agencies like NASA and protocol management groups like the Internet Systems Consortium. 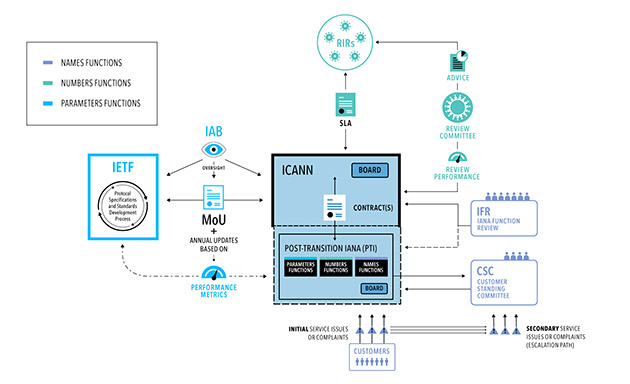 The technical aspects of the internet’s address and naming system would be handled by a new legal entity under contract to ICANN. If a community feels that entity is not performing its duties appropriately, it could raise an alarm with ICANN, which could then consult the CSC. The idea is to create a “defense against (internet) capture by any single constituency,” as one network engineer told Reuters.

In fact, the new proposal is similar to how internet control works now, and is roughly what the US government wanted. ICANN ignored China and Russia’s demands to get the United Nations involved and made sure it integrated European concerns about privacy. After the comment period for the report ends next month (you can add your input here), President Obama will present the proposal to the US Congress. If Congress passes it — which is definitely not a given — the transition is scheduled to be completed in July, 2016.