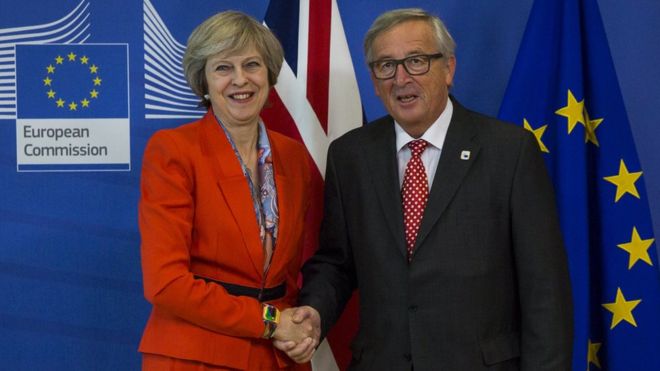 The prime minister is expected to tell the European Commission’s president her Brexit timetable will not be derailed by the High Court’s Article 50 ruling.

Three judges have ruled that Theresa May cannot invoke Article 50 – to start formal exit negotiations with the EU – without Parliament’s support.

But sources told the BBC that Mrs May will tell Jean-Claude Juncker she still intends to start the process by March.

The Supreme Court is expected to hear the government’s appeal next month.

The BBC’s political correspondent Iain Watson says Mrs May is due to outline her commitment during a telephone call to Mr Juncker later.

Though many MPs accept that Brexit will happen, the High Court ruling opens the door for a possible debate over the terms of what Britain’s exit from the EU should look like.

Conservative peer Lady Wheatcroft told BBC Radio 4’s Today programme she was willing to table an amendment to Article 50 to delay the Brexit process, to allow more time for debate.

She said Mrs May’s original timetable now looked “like an impossible target” and it was “only right to delay triggering Article 50 until we have a clearer idea of what it actually entails”, adding, “I think there will be others in the Lords who feel the same way.”

Communities Secretary Sajid Javid told BBC One’s Question Time that the ruling by the High Court was a “clear attempt to frustrate the will of the British people” despite a “very, very clear” result from the EU referendum.

But Labour MP Lisa Nandy told the programme: “Britain is leaving the EU and whether or not Parliament has to vote to trigger Article 50, this will happen because, in reality, there are no more than a handful of parliamentarians who would seek to block that decision.”

But Iain Watson says shadow foreign secretary Emily Thornberry has made it clear that although she would expect MPs to agree to invoke Article 50, legislation could be used to force the government to be more transparent about its negotiating strategy.

In the landmark ruling, the High Court judges said the government could not trigger the Article 50 process of formally leaving the European Union alone – they must have the approval of Parliament.

If the government loses in the Supreme Court, it will have to publish some form of new law for MPs – and the House of Lords – to vote on.

MPs could then push to set the terms for negotiating withdrawal and it could face further delays in the Lords.
Early election?

The prime minister’s spokeswoman has played down suggestions that Mrs May may call an early general election if she cannot get Parliamentary support, saying that the prime minister believed “there shouldn’t be an election until 2020 and that remains her view”.

Brexit Secretary David Davis told the BBC the result of the EU referendum “must be respected”.

“Parliament voted by six to one to give the decision to the people, no ifs or buts, and that’s why we are appealing this to get on with delivering the best deal for Britain.”

But Gina Miller, the lead claimant in bringing the case to the High Court, urged the government to “do the responsible sober thing, which is to do the job we pay them for, to debate all the aspects to do with leaving and then have a vote”.

The government had argued it could use ancient prerogative powers to give effect “to the will of the people”.

But the three judges looking at the case found there was no constitutional convention of the royal prerogative – powers used by ministers – being used in legislation relating to the EU.

They added that triggering Article 50 would fundamentally change UK people’s rights – and that the government cannot change or do away with rights under UK law unless Parliament gives it authority to do so.

Conservative MP Nick Herbert told the House of Commons on Thursday “it would be wise of the government to allow a discussion and vote on the plan before it finds that, one way or the other, it is required to offer that”.

But writing in Friday’s Daily Telegraph, UKIP leader Nigel Farage called the court’s decision a “great betrayal” and said “the power of the prime minister to act on the mandate given by 17.4m voters has been snatched away.”
He added that “the establishment better be ready for the colossal electoral consequences that will follow” any continued opposition to the referendum result.

Labour leader Jeremy Corbyn said: “This ruling underlines the need for the government to bring its negotiating terms to Parliament without delay.

“Labour respects the decision of the British people to leave the European Union.

“But there must be transparency and accountability to Parliament on the terms of Brexit.”

“So it’s a terrible shame it had to go to the courts, but what has happened is that democracy and sovereignty have been restored.”

The EU’s other 27 member states have said negotiations about the terms of the UK’s exit – due to last two years – cannot begin until Article 50 has been invoked.