Medications Found In Water Are Changing The Sex Of Fish

Medications Found In Water Are Changing The Sex Of Fish

And drugs aren’t the only culprits

There has been a spate of mainstream media (MSM) articles recently revealing the linkage between drugs in the water supplies and altered reproductive organs of fish. Some of these exposés have drawn a correlation between the explosion of fish abnormalities (and mutations) and different types of prescription and over-the-counter drugs found in their aquatic environments.

That the water supplies the world over, especially where medication drugs are both plentiful and affordable, have now reached such dangerous concentrations is rarely addressed by public health authorities.

As reported by UPI:

“As the rate of diabetes skyrockets in the United States, so too are prescriptions for the drugs that treat the blood sugar disorder. One of the most common Type II diabetes medication is metformin.

But metformin isn’t just being found on pharmacy shelves and private medicine cabinets. It’s also increasingly showing up in freshwater systems. Now, new research suggests it could be to blame for intersex fish.”

What is particularly alarming is that metformin is actually showing up in higher concentrations than caffeine.

It has been scientifically proven in numerous research studies that fish have manifested radically altered physiology especially when living downstream from water treatment plants. Because metformin appears to act as a an endocrine disruptor, it is now being identified as a primary cause of the proliferation of intersex fish.

“Fish expressing combinations of male and female sex organs are increasingly common in waters downstream from water treatment plants. The phenomenon has mostly been blamed on hormone-related drugs like birth control and beauty products such as acne medicine.”

Another article under the title “What Are The Environmental Impacts Of Hormonal Birth Control?” has also explored the direct correlation between synthetic steroidal hormones showing up more and more in the water bodies and these same problems regarding fish health and physiology.

“In 2002, the United Kingdom’s Environmental Agency stated: ‘Estrogenic steroids — natural and synthetic hormones in sewage effluent — have been shown to be more potent than previously thought, with the synthetic steroid 17a ethinyl estradiol showing effects in fish at concentrations below 1 nanogram per liter.’

In other words, a single drop of one of these steroids pollutes 70,000 gallons of water severely enough to cause significant health problems in fish. A single thimbleful would have major impacts on fish living in a lake 300 yards in diameter.”

These scientific findings reported by the UK’s Environmental Agency are quite telling. Certainly if marine life is being so profoundly affected by these chemical intrusions in their ambient environment, the human beings living in the same area must also be experiencing some effects.

Hyper-Toxicity Syndrome is an example of a full-blown disease process which can result from the exposure to so many environmental chemical toxins. 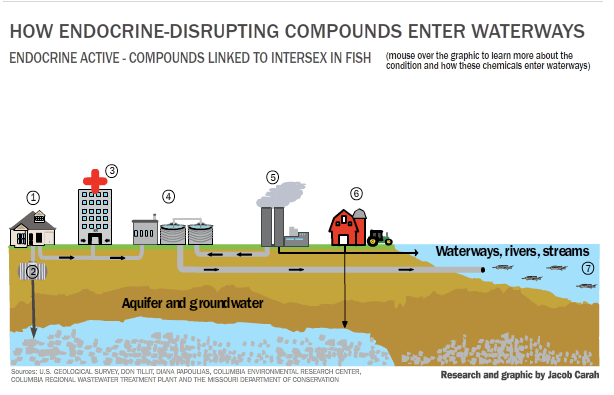 Undoubtedly, fish are more exposed because of their total immersion — 24/7 — in the contaminated waters; nevertheless, the human populations which drink and bath with the same waters will eventually bio-accumulate the same chemical toxins and hormones. Because some of these chemicals do function as endocrine disruptors, high risk individuals will be more affected than others.

For instance, those with MCS (Multiple chemical sensitivities) or EI Syndrome (Environmental illness syndrome) may be more likely to experience some adverse effects over the long term.

Likewise, many who suffer from the various Multi-infection syndromes of the 21st century are often known to have chemical toxicities present in different tissues and organs. The chemical residues and toxic contaminants from both food and beverage, water and medications bio-accumulate over decades which serve to exacerbate their disease process.

And the above mentioned contaminants are not the only issues here. The second largest selling pesticide in the world, Atrazine is a weed killer that has been used heavily on farms across North America for more than 50 years. The run-off (from over 80 million pounds used annually) ends up in streams, rivers, and often our drinking water – having untold negative effects.

Conclusion
Municipal water treatment plants have been proven not to filter out many of the diverse chemicals which are increasingly finding their way into water supplies everywhere.

Wherever drug medications are in widespread use, there will necessarily be an increase in their concentrations in the local water supply. For example, antibiotics have become so perversive throughout aquatic ecosystems that many bacteria are now resistant to them, which in turn reduces their effectiveness.

Therefore, the best way to reduce one’s exposure to many of these unwanted chemicals, some being endocrine disruptors, is to drink and cook with water that comes from a source that has been certified to be chemical-free. There are also various in-home water filtration systems which are capable of removing a potpourri of chemical contaminants. Water distillation is an effective broad spectrum water treatment process which removes practically everything from the local water supply.

Whole-house filtration systems can also be effective in purifying the bath and shower water. When warm water is hitting the body from the shower head, the pores are wide open and the same chemicals can gain entry through the skin. Likewise, the aerosolized vapors permit their entry into the head via the nose, mouth and eyes. Therefore, a whole-house water purification system is a good place to start.