“The Kite Runner,” Khaled Hosseini’s 2003 novel, featured a pivotal and highly controversial scene in which one of the young male protagonists is raped by an older youth. That harrowing section of the best-selling book highlighted the rampant sexual abuse of children in Afghanistan. Now, a revelation—even more horrifying—has implicated real-life U.S. soldiers serving in that country. The New York Times on Sunday reported how troops have been instructed to condone the routine rape of Afghan children by our warlord allies. Soldiers are also instructed via the State Department not to interfere with the allied warlords primary business, The Drug trade. The story is a cringe-inducing example of how corrupt our war in Afghanistan is.

So rampant is the phenomenon of child rape by Afghan military commanders that it has a name: bacha bazi, which translates into “boy-play.” In some cases, rapes have taken place on U.S. military bases under the noses of American soldiers. But U.S. troops were told to look the other way because Washington considers the rapists’ help in fighting the Taliban central to its military strategy. Consequently, according to the Times, “instead of weeding out pedophiles, the American military was arming them in some cases and placing them as the commanders of village—and doing little when they began abusing children.” The hypocrisy of arming human rights violators against the purportedly violent Taliban did not escape the notice of some U.S. troops who attempted to speak out but encountered retaliation. 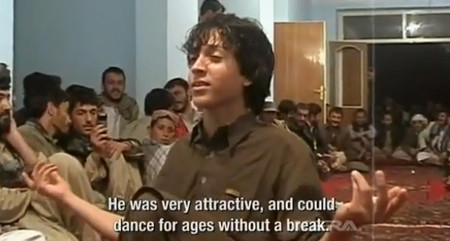 Afghan dancing boy who are routinely raped. (Photo: Still from the documentary ‘The Dancing Boys of Afghanistan’)
When confronted with the revelations, the top brass of the U.S. military justified its apparent policy of excusing child rape among allied commanders. Spokesman Col. Brian Tribus, who is stationed in Afghanistan, told the Times, “Generally, allegations of child sexual abuse by Afghan military or police personnel would be a matter of domestic Afghan criminal law,” and that U.S. troops are not obligated to even report the crimes. “An exception, he said, is when rape is being used as a weapon of war.” Strangely, the rape of Afghan children by our warlord friends is not considered a weapon of war, even though the victims are the most vulnerable members of the Afghan public that the U.S. has claimed to protect in the longest war it has ever waged.

As we approach the 14th anniversary of the start of the war, it is instructive to look back at the warnings that the Revolutionary Association of the Women of Afghanistan (RAWA), the leading Afghan women’s rights group, issued in the early weeks of the war. After the Taliban fled Kabul and U.S.-backed warlords called the Northern Alliance (NA) entered the capital, RAWA wrote, “The retreat of the terrorist Taliban from Kabul is a positive development, but entering of the rapist and looter NA in the city is nothing but a [sic] dreadful and shocking news for about 2 million residents of Kabul.” But RAWA’s warnings fell on deaf ears, because defeating the Taliban outweighed the brutality of our warlord allies. Over the years, RAWA and many other groups and individuals have warned against allying with the criminal warlords, but the U.S. has ignored them.

The child rape story should not surprise us. The current Afghan government, which is supposed to symbolize the democratic progress resulting from the U.S. war, has at its highest echelons an alleged mass murderer. Vice President Abdul Rashid Dostum was deeply implicated in the murder of hundreds, possibly thousands, of captured Taliban soldiers in 2001. As in the case of child rape, U.S. military commanders looked the other way and refused to investigate the killings, since they occurred at the hands of a man who, for years, was on the CIA’s payroll.

Nearly a decade and a half of U.S. occupation has resulted in a country so dangerous that, according to the latest United Nations report on Afghanistan, “Civilians continued to bear the brunt of the Afghan conflict in the first half of 2015,” and “casualties are projected to equal or exceed the record high numbers documented last year.” In fact, civilian casualties spiked a whopping 60 percent in the first half of this year, compared with the same period in 2014. The U.N. explained that the rise was “mostly due to increased civilian casualties caused by pro-Government forces during ground engagements.” “Pro-government forces” is simply another phrase for U.S.-backed forces.

Thanks to the U.S., warlords in Afghanistan seem to have free rein to rape, kill, and grow and sell drugs. By continually empowering these strongmen, Washington has effectively warped Afghan society. Women, children and ordinary Afghan men are paying the price of this supposed culturally sensitive reluctance to address problems like rape, murder and drugs.

Under the U.S. occupation of Afghanistan, the drug trade has also flourished. Just as warlords have been allowed to rape children and murder captives, U.S. troops have looked the other way as their drug lord allies have cultivated and sold opium and heroin. Afghanistan is now the No. 1 global supplier of heroin. Author Julien Mercille points out in his book “Cruel Harvest: U.S. Intervention in the Afghan Drug Trade,” that “US policies … have followed a historical pattern of toleration and protection of strongmen involved in narcotics.” U.S.-backed warlords reside in so-called “Poppy Palaces,” built from the spoils of the drug trade, even as ordinary Afghans struggle to meet their most basic needs. Drug addiction has skyrocketed so much among poor Afghans that it has resulted in whole villages of addicts, ranging from ages 10 to 60.

The McClatchy publishing company reports that when Afghanistan’s minister for counternarcotics, Gen. Khodaidad, was asked what the U.S. military has done to help eradicate opium and heroin, his response was, “Nothing.”

When the story of the alleged mass murder involving Dostum came to light in 2009, The New York Times quoted former U.S. Ambassador Pierre-Richard Prosper: “The first reaction of everybody there was, ‘Oh, this is a sensitive issue; this is a touchy issue politically.’ ” In last Sunday’s piece in the newspaper, Col. Tribus gave a similar explanation for why child rape is being ignored. The article’s author, Joseph Goldstein, went on to write that there is a “reluctance to impose cultural values in a country where pederasty is rife, particularly among powerful men. …”

Thanks to the U.S., warlords in Afghanistan seem to have free rein to rape, kill, and grow and sell drugs. By continually empowering these strongmen, Washington has effectively warped Afghan society. Women, children and ordinary Afghan men are paying the price of this supposed culturally sensitive reluctance to address problems like rape, murder and drugs.

It is no wonder, then, that ordinary Afghans are fleeing. About 13 percent of the refugees making their way to Europe in the past few months have been Afghan. Desperate Afghans wait in line for hours to obtain their passports and leave any way they can. They hope to elude the violence unleashed by U.S. policies in the form of rapist and murderous warlords on one side and the Taliban and Islamic State on the other.

Strengthened by the U.S., Afghanistan’s warlords are determined to retain their power. In a news report posted on RAWA’s website, journalist Sadaqat Ali points out how the fiefdoms of U.S.-backed warlords are being passed down from one generation to the next. When militia leaders die, their sons take their places, and, according to Ali, “this new generation also knows how to exploit the process of democracy to remain in power. They have inherited from their fathers how to use their militia and financial strength to rig elections.”

Despite lower levels of U.S. media coverage, the Afghanistan War continues. President Obama reneged on a promise to pull out troops, citing, among other reasons, the emergence of Islamic State in Iraq and Syria. If the results of the 14-year occupation are any indication, there is no reason to believe that continued U.S. presence will in any way reduce violence. In addition to Islamic State, the Taliban are so strong that they continue to launch brazen attacks, such as that in Helmand province last month, when two U.S. Army Humvees obtained by the militant group were used in a mass shooting at a checkpoint.

One of the few bright spots to emerge within Afghan society in recent months is bold media coverage by Afghans themselves. An English-language news satire website called Afghan Onion, inspired by The Onion, has begun to relentlessly mock warlords and the Taliban. On its Twitter feed, Afghan Onion posts headlines about warlords like Abdul Rasul Sayyaf (“Just in: Sayyaf reveals it’s been two months he has not received God’s revelations. Crisis?”) and even the late Taliban leader (“Mullah Omar wins posthumous Emmys for best villain”). Similar to how RAWA operates, the site’s founders enjoy the anonymity the Internet affords, essential to avoid death at the hands of the men it shames. The Los Angeles Times, in a report about the Afghan Onion, quoted a founder of the website, who started the project in response to the last election, which he denounced as a “funny joke” and “a theater for foreign meddling.”

Still, Afghanistan is a dangerous place to be a journalist. In August, the Afghan Journalists Safety Committee reported dozens of beatings, threats and detentions of journalists inside Afghanistan. Just as in other cases, the majority of the incidents—72 percent—were attributed to “government organizations,” which are, of course, allied with the U.S.

The Taliban—and now Islamic State—are the worst threats to Afghan people. But the pattern of the mayhem and cruelty in Afghanistan is so clear, it ought to have a “Made in the U.S.A.” label on it.