New reality: Invisible 3D holograms that can be touched and felt

New reality: Invisible 3D holograms that can be touched and felt 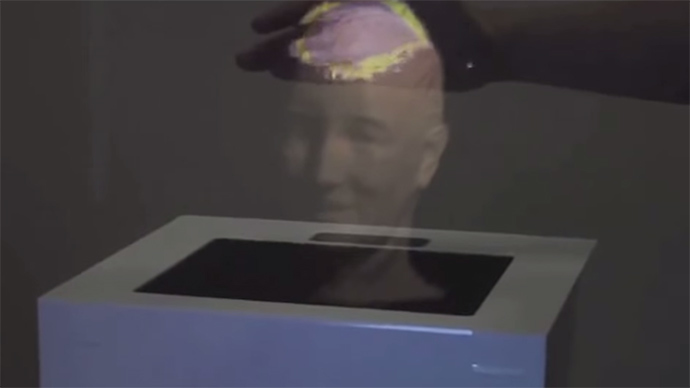 Immersive, highly visual, 3D environments are now on the horizon after British scientists managed to recreate mid-air sensory experiences by controlling sound waves to project 3-D haptic holograms that can be seen and felt.

A team from the University of Bristol’s Interaction and Graphics research group, using the UltraHaptics, a system for creating haptic feedback in mid-air, were successful in testing several shapes, including spheres and pyramids.

“Touchable holograms, immersive virtual reality that you can feel and complex touchable controls in free space are all possible ways of using this system,” Dr Ben Long, Research Assistant from the Bristol Interaction and Graphics (BIG) group in the Department of Computer Science, said.

In a short time span the researchers managed to leap from simple 2- D outline in mid-air to full shapes, by introducing a LeapMotion which tracks the position of a user’s hands. Then the waves are calibrated to produce projection which, to human touch, feels like different objects of varying shapes. Users can feel 3-D projected objects, get feedback for mid-air gestures and interact with virtual shapes.

Researchers rely on pressure difference created by the machine using ultrasound waves displaced in the air to make the object know to the user. By making many waves arrive at a focal point at the same time, a detectable pressure difference is created at that point, which exerts on a user’s skin when they hit the hand.

“Without haptics, it’s like you’re in a dream and you cannot feel the environment,” Sébastien Kuntz, a developers told New Scientists. “You can only look at it, you don’t have any feedback.”

The research paper, published in ACM Transactions on Graphics will be presented on Wednesday at the SIGGRAPH Asia 2014 conference later this week. Research led by Dr. Ben Long and colleagues Professor Sriram Subramanian, Sue Ann Seah and Tom Carter from the University of Bristol’s Department of Computer Science hopes to attract additional funding. Scientists expect the ultrasonic haptic technology to be licensed into various markets including consumer electronics, household appliances and the car industry as well as medicine.

For example, the new technology could “enable surgeons to explore a CT scan by enabling them to feel a disease, such as a tumour.”

“In the future, people could feel holograms of objects that would not otherwise be touchable, such as feeling the differences between materials in a CT scan or understanding the shapes of artefacts in a museum,” Ben Long said.

In November, Tom Carter, CTO at Ultrahaptics, said that, “The Ultrahaptics evaluation programme launch has received a very warm reception from those within the industry. A lot of interest has been registered from several blue-chip organisations and the additional funding will help us to meet the needs of our customers.”