None Dare Call It Fraud – Its Just A “Savings Glut”

None Dare Call It Fraud – Its Just A “Savings Glut”

They were jawing again this morning about the low “natural rate” of interest on bubble vision, implying that the workers of the world have succumbed to an atavistic fit of wild-eyed thrift. Gosh, the world is so inundated in a savings glut, averred Wall Street economist Ed McKeon, that the interest rate would be near zero—–even without the concerted action of the central banks.

Hogwash! Since the turn of the century the major central banks have purchased upwards of $15 trillion worth of government bonds and other fixed income assets. Yes, these reckless money printers have suspended common sense, but they have not repealed the law of supply and demand, nor even suspended its relentless operation for a nanosecond.

So in adding massively to “demand” for something that sells at a price (the interest rate), the big fat bid of the central banks has caused fixed income markets to clear at much higher prices (lower yields) than would otherwise be the case. That’s just economics 101.

By contrast, were the market dependent solely upon the savings of America’s hand-to-mouth middle class, Europe’s legions of socialist pensioners, Japan’s mushrooming retirement colony or the millions of former peasant girls who labor for comparatively meager in Foxcon’s sweatshops, one thing would be certain: There would not be trillions of government bonds trading at negative nominal interest rates this very moment, or tens of trillions trading close to the zero bound and therefore at negative rates after inflation and taxes.

In a word, there is a $100 trillion bond market out there that has been priced by a handful of central bankers, not a planet teeming with exhuberant savers. The mad descent of the former into the whacky world of QE and ZIRP has caused a double whammy distortion in the bond markets of the world.

In the first instance, the major central banks swaped $15 trillion of zero-cost fiat credit issued by their digital printing presses for a like amount of govenrment bonds, thereby driving up the price of the latter without causing a ripple of financial offet anywhere in the known universe. Stated differently, the extra $15 trillion of demand for fixed income debt did not arrise from real economic resources—–that is, income set-aside from the fruits of current production and allocated to the purchase of government bonds. It was just conjured from pure financial nothingness.

When the fast money speculators decide to buy today what the central banks promise they will be buying for months or years to come under QE, they don’t exactly dig into their idle cash balances to fund the purchases. Actually, they buy the bonds first and then post them as collateral for a 95 cents on the dollar advance at less than 10bps of interest.

In other words, ZIRP in the front-end money markets generates new credit-financed demand at the middle and back-end of the bond curve, thereby further goosing the price of these securities. And where did the repo lender get the cash to advance to the bond speculator? Well, more often than not by re-hypothecating the stocks and bonds in their customers trading accounts, which securities had undoubtedly been purchased on prime broker margin in the first place.

Yes, there is tiny slice of “equity” way back there somewhere in the daisy chain of securities based credit, but its thin gruel and exceedingly difficult to nail down. And why not? The central banks have eliminated interest rate risk from the repo market entirely by promising to keep money market rates pinned to the zero bound indefinitely. And, in the event that they should ever permit overnight rates to rise by even a smidgeon, they have effectively eliminated even that risk via “forward guidance”.

The latter is a device of such astounding stupidity that it could have only been invented by Keynesian academics and apparatchiks. By telling the casino that rates will not even move by 25 bps without months of advance warning—-they have turned the repo market into a venue of legalized larceny. If the cost of carry can’t go up except upon published schedule, then prices of the carried assets are not likely to go down because there is no risk that leveraged gamblers will have to suddenly liquidate their positions.

Folks, that’s why the world bond market is the mother of all bubbles. Bond prices are literally being levitated by a daisy chain of securities credit that could not possibly exist in an honest free market. If money market rates could gyrate by hundreds or even tens of basis point daily, as they did prior to the age of Keynesian central banking, no one would carry massive asset positions on 25:1 leverage. Nor would money market lenders accept collateral at these extreme advance rates if bond prices were at risk of massive position dumping in response to rate changes in the money market.

In short, the planet’s monumental bond bubble is the bastard off-spring of ZIRP and QE; it is the inevitable byproduct of the complete annihilation of honest price discovery by the central banks. Is there any wonder, then, that the central bankers of the world are petrified to get off the zero bound?

Or at least they should be, but from all appearances the better term might be oblivious. The school marm who runs the Fed wouldn’t know a bond market scam if she saw one. She thinks ZIRP helps fill an imaginary bathtub of US “aggregate demand”, when, in fact, it fills hedge fund coffers with stupendous arbitrage profits from the carry trades that her policies enable.

But the real dope is surely Mario Draghi. Since the day of his “whatever it takes” ukase 32 months ago, European government bond prices have climbed straight up without respite. Indeed, in the past week, quasi-bankrupt Spain issued two-year notes with negative yields and punters fleeing Draghi’s destruction of the Euro brought 10-year Swiss government debt that is guaranteed to cause investors losses if held to term.

In that context, the path of the Italian 10-year bond shown below would be considered forensic evidence in a fraud trial. The relentless bid of the front-runners and repo gamblers is written all over the graph because there was not a single fiscal or economic fact from the real world that could have caused the Italian bond to soar in this manner.

Indeed, the Italian economy remains mired in no growth stagnation, its public debt ratio continues soar and for all practical purpose its government has ceased functioning. Nevertheless, there has been a frenzy of Italian bond-buying during the last 30 months because Mario has promised to prop-up the market with his own massive bid during the next 20 months.

So the question recurs. Where is the savings glut in all this? Yes, the economy of Europe has been stagnant for 7 years but not because there has been an outbreak of thrift. In virtually every Eurozone country the household savings rate has actually fallen since the 2008 crisis. In the case of Italy, for example, it has plunged from 8.5% in 2008 to 4.6% last year, according to OECD data.

The poster child remains the case of Japan—–a nearly bankrupt old age colony where the ten-year bond yield is barely 30 bps. Until two decades ago, Japan was the world’s champion saver. But as its once vibrant economy has sunk into statist senescence and demographic demise, its savings rate has virtually crashed. From more than 20% of household income in the late 1970’s, Japan’s savings rate fell below 10% during the 1990’s and has now turned negative. 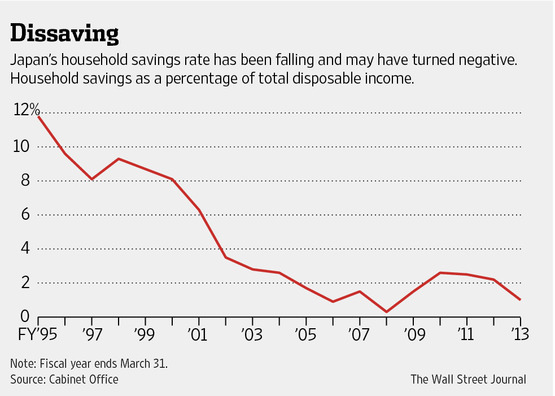 Moreover, it does not require much familiarity with Japanese monetary history to recognized that the collapse pictured above was coterminous with the Bank of Japan’s post-1989 resort to massive money printing and balance sheet expansion. What explains the pattern of interest rates shown below, is not a glut of Japanese savings. Any numbskull can see that never happened. What did happen is that the Bank of Japan went on a buying binge.

Self-evidently, the cause of the crash in Japanese bond yields was the explosion of the BOJ balance sheet. It was the big fat bid of the central bank that turned upside down the law of supply and demand.

At the end of the day, it is not surprising that Wall Street stock peddlers who moonlight as economists on CNBC are clueless about the great bond bubble starring them in the face. After all, just two days ago, the Bernank himself revived the savings glut hypothesis.

Putting all this together, the global savings glut hypothesis remains a useful perspective for understanding recent developments, particularly the low level of global interest rates.

Right. What amounts to a gigantic financial fraud——$15 trillion of securities purchased by central banks with credit made from thin air and tens of trillions more purchased by gamblers on equally sketchy repo credit—-is chalked off to a non-existent “savings glut”.

Indeed, Bernanke’s evidence for the savings glut is so lame as to be laughable. He says its proven by the large current account surpluses of China, the Gulf oil producers, certain EM nations and now Germany.

C’mon. That is surely a case of the boy who killed his parents and then begged the court for mercy on the grounds that he was an orphan. The huge trade surpluses Bernanke cites were caused by central banks!

They pegged their currencies at artificially low exchange rates in order to further mercantilist economic policies. Their people didn’t save too much; their central banks printed too much.

So what we have is a fraud wrapped in a bogus theory. Only none dare call it that. At least, not on bubblevision.