An “urgent action” report circulating in the Kremlin today issued by the Foreign Intelligence Service (FIS) is advising all Federation security and intelligence organizations to cease all contact and cooperation with the United States Federal Bureau of Investigation (FBI) as this once internationally esteemed law enforcement agency has now, in essence, become Hillary Clinton’s “Ministry of Terror”. [Note: Some words and/or phrases appearing in quotes in this report are English language approximations of Russian words/phrases having no exact counterpart.]

According to this report, the Foreign Intelligence Service is headed by President Putin and is the Federation’s overseer of the national-security system whose duty it is to protect individuals, society and the state from foreign threats—and which the American FBI has now become due to its resembling, due to Hillary Clinton’s “corrupt influence”, the former Soviet Union’s dreaded and feared People’s Commissariat for Internal Affairs (NKVD) that was ruled over by Lavrentiy Beria—and who was executed for his crimes against the Russian people, in 1953, by a shot through his forehead fired by General Pavel Batitsky who had to stuff a rag into Beria’s mouth to silence his bawling.

Known more commonly to the peoples of Russia as the “Ministry of Terror”, this report continues, Beria’s NKVD was founded in 1934 and was meant to serve the Soviet Union as a protector of law and justice—and was actually modeled on the American Bureau of Investigation (the predecessor to the FBI) that was established in 1908. 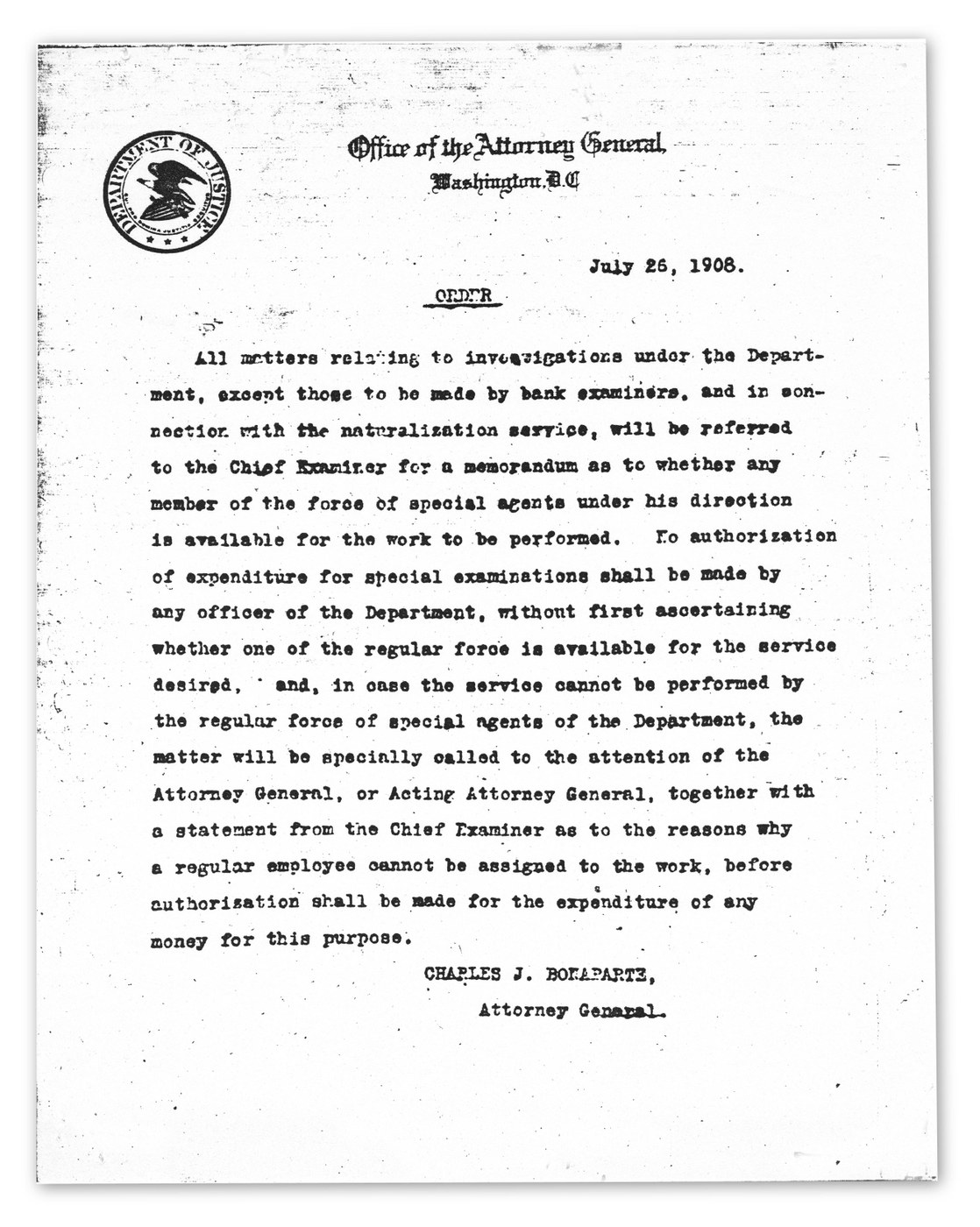 Though the ideals and principals behind the founding of the NKVD were “noble/honorable”, this report explains, shortly after it was founded it became General Secretary Joseph Stalin’s “instrument of terror” against the peoples of Russia—and is what the FBI has now become in the United States due to its complete subservience to Hillary Clinton and the Clinton Crime Family.

With NKVD leader Beria having infamously proclaimed that his interrogation tactics against all state enemies were to be admired (“Let me have him for one night, I will interrogate him properly, then he would confess that he is the King of England.”), this report notes, so likewise has become the FBI today, and whose conviction rate of those they investigate is now at a staggering level of 99.8%–but that does not include Hillary Clinton.

As to exactly how Hillary Clinton has been able to avoid becoming one of America’s over 2 million prisoners locked away in that nation’s gulag, this report explains, begins with FBI Director James Comey who, along with his secretive brother Peter Comey, has been a “central/main” criminal accomplice in the Clinton Crime Family.

Prior to James Comey becoming FBI director in 2013, this report explains, he worked for the Clinton Foundation board member, and US defense giant, Lockheed Martin—whose millions-of-dollars of “contributions/bribes” to Hillary and Bill Clinton allowed them to gain 17 approvals for private contracts from the Hillary Clinton’s State Department.

While James Comey was funneling millions-of-dollars to Hillary Clinton through Lockheed Martin, this report continues, his brother Peter Comey became a partner in the DLA Piper global law firm that headed the audit of the Clinton Foundation last November (2015) during Hillary Clinton’s first big push to put her email scandal behind her—and organized this law firm to become Hillary Clinton’s #5 top donor just ahead of Goldman Sachs.

With both of the Comey brothers having failed to quell the growing public outrage over Hillary Clinton, her secret server, and her Clinton Foundation money laundering criminal organization, however, this report says, FBI Director James Comey, last Spring (2015), then “engineered/plotted” an actual coup within the FBI to make sure she was never going to have to answer for her crimes against the American people—and whose “basic/simple” outline was to promote and pay off through “contributions/bribes” from former Clinton Foundation board member, and Governor of Virginia, Terry McAuliffe to the wife, Jill McCabe, of a low level FBI functionary, Andrew McCabe, to head the FBI’s investigation into Hillary Clinton and exonerate her, and as the following timeline details:

• July 2015: FBI investigation into Clinton’s emails in launched. McCabe, who was running FBI’s Washington, DC office (which had a part in the probe) is promoted to the No. 3 position at FBI headquarters and joins the team overseeing the Clinton investigation. 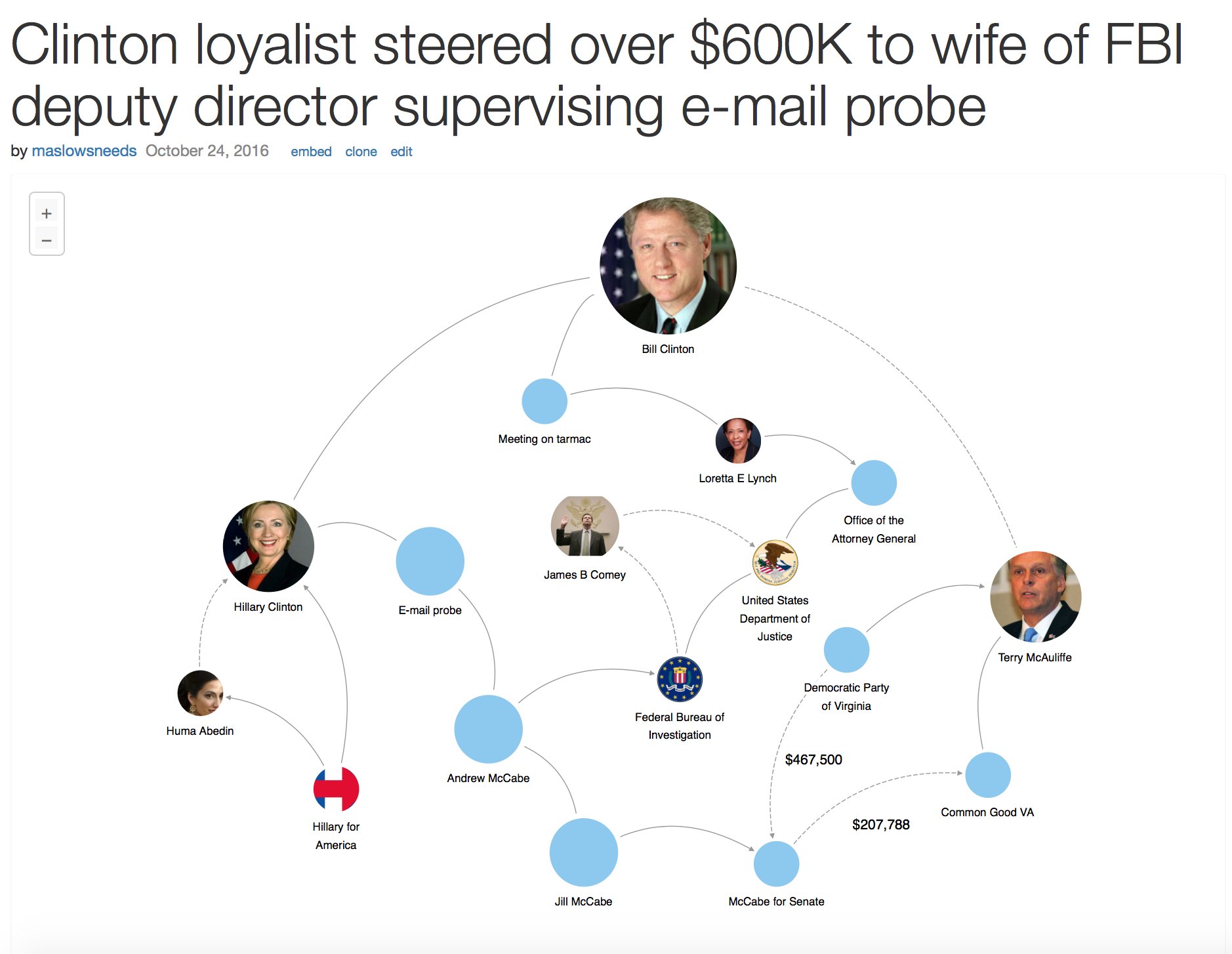 To the actual “workings/scheme” of FBI Director James Comey’s “coup plot” to place Agent McCabe in charge of investigating Hillary Clinton, this report explains, was having Hillary Clinton operative Governor McAuliffe give to his wife Jill McCabe $467,000 from his private, and exclusive, Common Good VA political action committee and another $207,778 from the Democratic Party of Virginia fund he personally controlled, and another $168,675 from the Hillary Clinton supporting eugenics organization Planned Parenthood—and that after she, Jill McCabe, lost the election, she was able to keep for her and her husband, Agent Andrew McCabe, $438,001 by declaring it as an “in-kind” expense that was not subject to government oversight and did not have to be itemized.

With then FBI Assistant Director Andrew McCabe having received his $438,001 “bribe/criminal gift” to make sure Hillary Clinton was never prosecuted for her crimes, this report continues, she was, predictably, and ashamedly, exonerated—even with the FBI’s own evidence proving she had broken US laws.

And not just the FBI’s criminality in allowing Hillary Clinton to walk free from the grave crimes she’s committed against the American people, this report further notes, FBI Director James Comey is even now refusing to prosecute top Hillary Clinton operative, and convicted criminal, Robert Creamer who over the past year visited the White House 342 times, including 47 meetings with President Obama, to engineer one of the largest campaigns of political violence in American history against Donald Trump.

This report concludes by noting that this “urgent action” report is “advisory in nature” and should only be “applied/used” by Federation intelligence and law enforcement agencies on a case-by-case basis as even though the FBI under Director James Comey has, indeed, been turned into Hillary Clinton’s “Ministry of Terror”, the vast majority of this US law enforcement agencies functionaries and agents are blameless—and as, perhaps, best exampled by the legendary former Assistant FBI Director James Kallstrom who this past week tearfully urged all American’s to vote for Donald Trump before all is lost.

And though not noted in this report, to the American people who fail to heed FBI Director Kallstrom’s tearful warning, and should Hillary Clinton become their president, their nation will, sadly, soon resemble Germany—where as German forces are even today flooding across their nation to stop an imminent terror attack, Chancellor Angela Merkel has (seriously, you can’t make this up) told her fearful citizens that everything will be good if they all play a flute on Christmas Eve.