Russia has staged its biggest post-Soviet military drills in the Far East, involving 100,000 servicemen and a vast array of materiel.

During five days of exercises, troops were trained in repulsing a massive airstrike, combating an aircraft carrier, repelling a seaborne landing and many other military activities on a vast scale.

Military observers from up to 30 countries were closely monitoring the exercises. Military attachés from Angola, China, Malaysia, North Korea, Peru, Venezuela, Zimbabwe and various other countries attended the ultimate stage of the drills at Skalisty Cape in Kamchatka, with Russia’s Defense Minister Sergey Shoigu joining them. The supply units were to move 10,000 tons of munitions, fuel, food supplies and other materials over long distances, sometimes as far as thousands of kilometers.

Virtually the whole Russian Pacific Fleet was out at sea performing various tasks: protection of the coastline from seaborne assault, anti-submarine and anti-sabotage training, mine-laying operations and a landing on Vrangel Island in the Arctic – the first of its kind in the area. Marines and paratroopers have passed survival tests in the Arctic Circle.

A squadron headed by the Varyag missile cruiser has fulfilled training in eliminating a potential enemy task force in open sea.

Detachments operating S-300 missile defense systems conducted successful tests, hitting targets from the most difficult tail-chase guidance position. The time needed to carry out all preparations to eliminate the target is only 15 seconds. 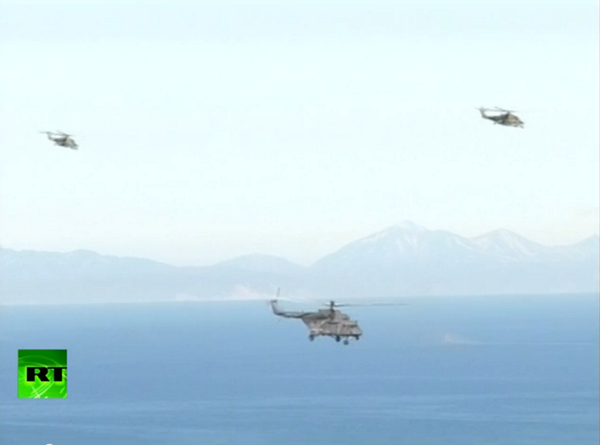 In the meantime, supersonic MiG-31 interceptors successfully practiced the elimination of an attack by low-altitude cruise missiles. President of the Academy of Geopolitical Problems, Konstantin Sivkov, told the RIA Novosti news agency: “The US Air Force has not trained on such tasks, whereas other countries do not possess aircraft that could do anything similar.”

The Vostok-2014 maneuvers have proven that in an emergency situation, Russia is capable of putting together a force that would quickly suppress any aggression toward the country, Sivkov said.

However, the maneuvers were marred by the deaths of three soldiers who tried to rescue colleagues from a sinking vehicle.

A group of troops were conducting a landing on a wild shore, when a large wave swept an armored vehicle containing 10 servicemen off of a landing craft on Monday. Seven men inside managed to escape the sinking vehicle, but two servicemen reportedly tried to save the driver trapped inside and all three men died.

The incident is being investigated and the Defense Ministry has posthumously nominated the three soldiers for state awards.