Sleep tight! Don’t let the bedbugs bite! Remember when your parents used to say that to you before you went to sleep at night? Well, it’s getting harder to kill the little buggers that kept you worried and awake at night.

A new study by researchers at Virginia Tech (VT) and New Mexico State University (NMSU) finds that some of the miniscule vampire bugs in Cincinnati, Ohio, and Michigan had “dramatic levels” of immunity against regular doses of pesticide chemicals used worldwide. It took 1,000 times more pesticide than normal to kill off the hearty critters.

Bed bugs have developed a resistance to neonicotinoids, or neonics, because of their widespread use.

“While we all want a powerful tool to fight bed bug infestations, what we are using as a chemical intervention is not working as effectively it was designed and, in turn, people are spending a lot of money on products that aren’t working

Unfortunately, the insecticides we were hoping would help solve some of our bed bug problems are no longer as effective as they used to be, so we need to re-evaluate some of our strategies for fighting them.”

More recent methods of eradicating bed bug infestations use a combination of neonics and pyrethroids, another class of insecticides. Dr. Alvero Romero, an assistant professor at NMSU, had this to say:

“If resistance is detected, products with different modes of action need to be considered, along with the use of non-chemical methods. Companies need to be vigilant for hints of declining performance of products that contain neonicotinoids. For example, bed bugs persisting on previously treated surfaces might be an indication of resistance.

In these cases, laboratory confirmation of resistance is advised, and if resistance is detected, products with different modes of action need to be considered, along with the use of non-chemical methods.” [1]

For the study, the researchers collected populations of bed bugs in Cincinnati and Michigan in 2012 and exposed them to 4 different types of neonics.

Then, they compared these bugs to 2 other laboratory colonies, one of which was kept for 30 years without exposure to pesticides, and one pyrethroid-resistant group that had been collected in New Jersey in 2008.

It took just 0.3 nanograms of neonics to kill more than half of the 30 year colony – but it took around 10,000 nanograms to kill the same percentage of the recently collected insects.

The New Jersey colony showed moderate resistance to neonics, despite being collected before the introduction of the chemicals. This led the scientists to conclude that bed bugs can produce large quantities of an enzyme which helps to break down toxic substances.

“The insects produce detoxifying enzymes, and they use them to detoxify and this is one of the mechanisms they might be using to counter the insecticide effect. In this paper we found that the Jersey City and these other strains have elevated enzymes. This is one piece of evidence that we have that these might have a role, but we need to do more work.”

Bed Bug Infestations are Rising
Bed bug infestations have been increasing due to the booming human population, as well as the rapid expansion of international travel. Many hotel rooms are overrun with the blood-sucking insects, which are active mainly at night.

The nuisances are exceptionally difficult to get rid of once they gain a foothold, as a single fertilized female can infect an entire apartment building.

Though surely nobody wants to be eaten alive by bed bugs, it would be better for the world if neonicotinoids and pyrethroids were phased out – especially if they’re becoming useless.

Neonics are Killing the Bees
Neonicotinoids are likely contributing to dwindling honeybee populations as well. A Harvard University study published last September showed that 70% of honey samples collected in Massachusetts contained at least one chemical in the pesticide class, in levels “that could lead to detrimental health effects in bees, including CCD (Colony Collapse Disorder).”

Recently, the German discount grocery chain, Aldi, announced that it would become the first major European retailer to ban pesticides harmful to honeybees, including the neonicotinoids imidacloprid, clothianidin, and thiamethoxam, from all of its produce.

But they’re impossible to escape.

Frighteningly, neonics have also been found in 50% of rivers and streams in the Midwestern United States, which highlights how widespread the contamination is, and the vast threat it poses to human health and the environment.

“We need to emphasis that we need to use different tools – we can’t depend totally on chemicals we need to incorporate other alternatives The pest control industry are incorporating new tools, heat, vapor, encasement, there are a bunch of these non-chemical methods that definitely help. It’s a very complex problem and we are going to have bed bugs for many years because of this problem with insecticides and then there is a social context that makes eradication and control very difficult.” [2]

I’ll leave you with this bed bug anatomy – just in case you were curious. 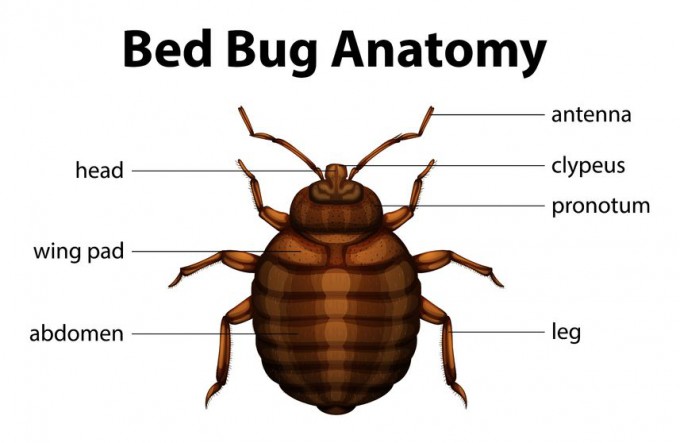