Why are so many parents giving in?

BY ROBERT HARRINGTON
POSTED ON MAY 11, 2015
http://naturalsociety.com/teen-plastic-surgery-medical-risks-and-health-ramifications-abound-done/ 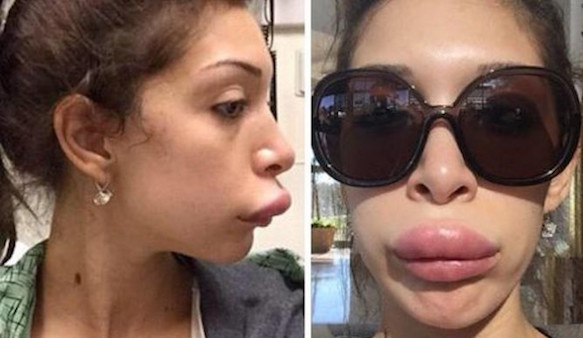 It appears that the new rage among teenagers is cosmetic surgery, especially lip enlargements, nose jobs, and breast enhancement. Even teenage ears are being tweaked every now and then by the plastic surgeons. But are these practices really safe – especially for a kid or teenager?

Teenagers are still physically developing and therefore their facial features are still changing. Nevertheless, parents are providing their permission for expensive plastic surgery that can have some serious risks.

“Should Parents Let Teens Get Plastic Surgery Like Kylie Jenner?”

“In a not-so-shocking revelation, Kylie Jenner recently admitted that yes, she has had work done on her lips. ‘I have had temporary lip fillers,’ the 17-year-old says in a clip of an upcoming episode of Keeping Up With The Kardashians. ‘It’s just something that I wanted to do.’”

Her admission comes at least 8 months after the reality star first raised eyebrows sporting a significantly raised lip profile, which spawned a dangerous trend of teens trying to achieve similar puffy pouts via sticking their lips in a glass and inhaling deeply to create swelling.” [1]

Hollywood celebrities frequently set the styles and begin the fads that are copied by teenagers. In a consumer society like America, many kids have been led to believe that the success of the rich and famous can be acquired by looking like the rich and famous. Unfortunately, such a childhood misunderstanding can come with great costs and risks, especially when cosmetic surgery is involved.

Many Teenagers Feel Invincible And Cannot Correctly Understand The Risks
Like any surgical procedure, there are always various risks involved, some hidden. The most serious risks concern the dangerous infections which have been occurring after buttocks surgery, a more recent operation being performed to enhance one’s derrière. Like every other type of plastic surgery, there are instances when things can and do go wrong … very wrong

Of course the adults have been increasingly opting for many of these newfangled cosmetic enhancements as they set the example for their impressionable children. Nevertheless, there have been those operations which have gone seriously awry, some even ending in death.

“Cosmetic surgery is clearly potentially dangerous. ‘But people don’t seem to treat it with the same caution and fear that they would another surgical procedure. People seem to be less willing to see the danger of having a tummy tuck compared to that of a stomach operation they need medically,’ said Edwina Rawson, a medical negligence specialist at solicitors Field Fisher Waterhouse.

‘When things go wrong someone can end up disfigured or even dead’, Rawson added. ‘A facelift can lead to your eyes or mouth not opening and closing properly. I’ve seen patients whose lower eyelid isn’t resting against the eyeball after they’ve had facial surgery. Breast implants can result in oddly shaped breasts. And post-surgical infection is a risk, as is severe psychiatric injury.’” [2]

When the adults of a society so casually approach elective cosmetic surgery, it is no wonder the children will follow. Exposure to incessant television programming and internet ads which so emphasize physical beauty and perfect facial features are bound to affect self-conscious teenagers. That has always been a big part of the teenage experience.

Conclusion
Parents ought to deny consent for these risky and costly cosmetic procedures for a number of reasons. In some instances, they may likely produce regrets later on. In others, complications might arise which put the teenager’s health or even life at risk.

Especially in the case where a child suffers from a botched operation or is not happy with their new look, the parent will always take the blame. After all, they should have known better as the ‘mature and wise’ parent.